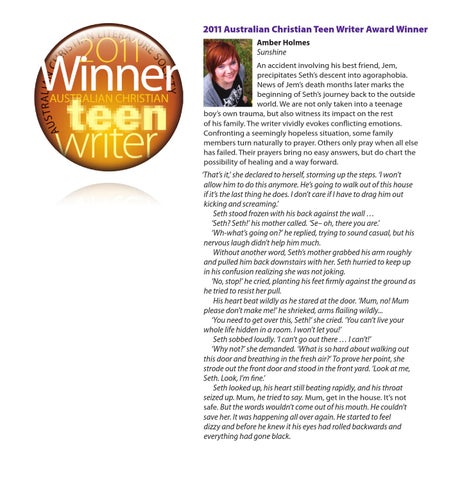 2011 Australian Christian Teen Writer Award Winner Amber Holmes Sunshine An accident involving his best friend, Jem, precipitates Seth’s descent into agoraphobia. News of Jem’s death months later marks the beginning of Seth’s journey back to the outside world. We are not only taken into a teenage boy’s own trauma, but also witness its impact on the rest of his family. The writer vividly evokes conflicting emotions. Confronting a seemingly hopeless situation, some family members turn naturally to prayer. Others only pray when all else has failed. Their prayers bring no easy answers, but do chart the possibility of healing and a way forward. ‘That’s it,’ she declared to herself, storming up the steps. ‘I won’t allow him to do this anymore. He’s going to walk out of this house if it’s the last thing he does. I don’t care if I have to drag him out kicking and screaming.’ Seth stood frozen with his back against the wall … ‘Seth? Seth!’ his mother called. ‘Se– oh, there you are.’ ‘Wh-what’s going on?’ he replied, trying to sound casual, but his nervous laugh didn’t help him much. Without another word, Seth’s mother grabbed his arm roughly and pulled him back downstairs with her. Seth hurried to keep up in his confusion realizing she was not joking. ‘No, stop!’ he cried, planting his feet firmly against the ground as he tried to resist her pull. His heart beat wildly as he stared at the door. ‘Mum, no! Mum please don’t make me!’ he shrieked, arms flailing wildly... ‘You need to get over this, Seth!’ she cried. ‘You can’t live your whole life hidden in a room. I won’t let you!’ Seth sobbed loudly. ‘I can’t go out there … I can’t!’ ‘Why not?’ she demanded. ‘What is so hard about walking out this door and breathing in the fresh air?’ To prove her point, she strode out the front door and stood in the front yard. ‘Look at me, Seth. Look, I’m fine.’ Seth looked up, his heart still beating rapidly, and his throat seized up. Mum, he tried to say. Mum, get in the house. It’s not safe. But the words wouldn’t come out of his mouth. He couldn’t save her. It was happening all over again. He started to feel dizzy and before he knew it his eyes had rolled backwards and everything had gone black.