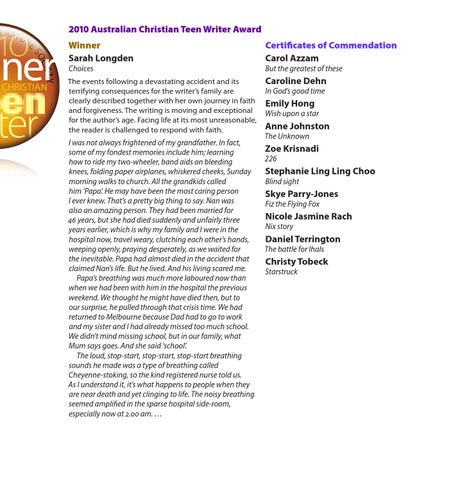 The events following a devastating accident and its terrifying consequences for the writer’s family are clearly described together with her own journey in faith and forgiveness. The writing is moving and exceptional for the author’s age. Facing life at its most unreasonable, the reader is challenged to respond with faith. I was not always frightened of my grandfather. In fact, some of my fondest memories include him; learning how to ride my two-wheeler, band aids on bleeding knees, folding paper airplanes, whiskered cheeks, Sunday morning walks to church. All the grandkids called him ‘Papa’. He may have been the most caring person I ever knew. That’s a pretty big thing to say. Nan was also an amazing person. They had been married for 46 years, but she had died suddenly and unfairly three years earlier, which is why my family and I were in the hospital now, travel weary, clutching each other’s hands, weeping openly, praying desperately, as we waited for the inevitable. Papa had almost died in the accident that claimed Nan’s life. But he lived. And his living scared me.   Papa’s breathing was much more laboured now than when we had been with him in the hospital the previous weekend. We thought he might have died then, but to our surprise, he pulled through that crisis time. We had returned to Melbourne because Dad had to go to work and my sister and I had already missed too much school. We didn’t mind missing school, but in our family, what Mum says goes. And she said ‘school’.   The loud, stop-start, stop-start, stop-start breathing sounds he made was a type of breathing called Cheyenne-stoking, so the kind registered nurse told us. As I understand it, it’s what happens to people when they are near death and yet clinging to life. The noisy breathing seemed amplified in the sparse hospital side-room, especially now at 2.00 am. …

But the greatest of these

Wish upon a star

When the gospel is preached literature will be needed. SparkLit advances God’s Kingdom by empowering Christian writers, publishers and distr...

When the gospel is preached literature will be needed. SparkLit advances God’s Kingdom by empowering Christian writers, publishers and distr...