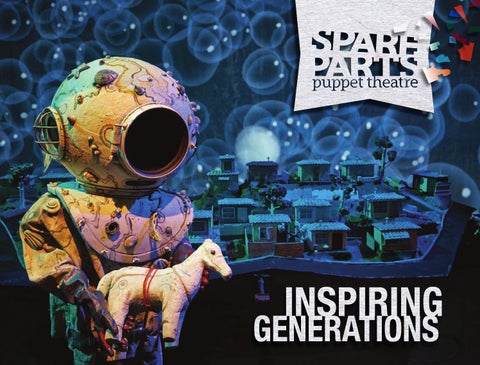 To transform peopleâ&amp;#x20AC;&amp;#x2122;s view of the world and each other through world class puppetry. Through the art of puppetry we share stories that celebrate what it is to be human; connecting audiences across generations.

exploring what it is to be human

Through puppetry we engage with timeless and universal issues, exploring and celebrating what it is to be human. We encourage people to pause, wonder and reflect, helping to grow and nourish their emotional intelligence and to understand the human condition.

We strive for personal and professional excellence in everything we do.We treasure our audiences with an uncompromising commitment to quality. Our puppets are beautifully and superbly handcrafted. We are leaders in art form and artist development for puppetry.

We create adventurous and enriching theatre that expands the way audiences see, feel and experience the world. We are courageous. We experiment with new ideas and push the boundaries of the art form. Our artistic offerings heighten the imagination. We create contemporary puppetry works, fusing puppetry, dance, new media, visual arts, music, theatre and adaptations of popular literary works.

We are an energetic, fun-loving and playful company. We bring joy to our audience through offering a mirror to their lives and a window to the lives of others.

Spare Parts Puppet Theatre is Australia’s flagship puppetry company and a driving force in the puppetry landscape in Australia since 1981. The company’s first production was a commission by the prestigious Perth International Arts Festival. Guest artist Noriko Nishimoto, master puppeteer, was brought from Japan to work on the production. Noriko became the Artistic Director from 1997 to 2001, and continues to this day sharing her knowledge and expertise with emerging artists. A pool of skilled puppetry artists continues to grow and develop under Noriko’s guidance. In 1987 Spare Parts built its current venue in Short Street, Fremantle. The venue has a 190seat theatre, museum and exhibition space, a rehearsal studio, and office space.

The company is now led by an outstanding artistic team in our award-winning Artistic Director Philip Mitchell and Associate Director Michael Barlow. The pair oversee the company’s artistic programs which include the development of new works, reimagining and reinvigorating existing works, and training and development of local, national, and international puppetry artists. Through its work, Spare Parts continues to stretch and strengthen its reputation for creating highly imaginative, world-class productions that warm hearts and create infectious joy.

Spare Parts is currently led by Artistic Director Philip Mitchell and Associate Director Michael Barlow. Philip Mitchell is an award-winning director and puppeteer with more than two decades experience working in puppetry and visual theatre in Australia. Philip’s work explores the point at which the visual arts meets the performing arts – it is this point of ignition that excites and feeds his artistic journey. Through his work Philip aims to explore new directions in puppetry development; he is passionate about discovering where the artistic leadership or authorship of a work can be placed. Philip is committed to nurturing new artistic leaders in puppetry though Australia’s only tertiary education unit at WAAPA and training programs like FirstHand.

By 2025 Spare Parts Puppet Theatre aims to be recognised as a global centre for excellence in puppetry where the foreground is the creation of work. We will know we have achieved our vision when we are:

Michael Barlow is a puppetry director, writer and performer.

He has trained extensively in puppetry technique with Living Treasure Noriko Nishimoto and L. Peter Wilson, and, in contemporary mime with Kriszta Bodonyi at Hush Mime School. He has also worked with visionary puppeteer Roman Paska.

Creating work of excellence for an intergenerational audience Working with the best artists to create innovative and experimental new works Working from a significantly improved venue amenity, to match the quality of the company’s artistic programs Acknowledged as leaders in artist training and development A well resourced organiastion – creatively, financially and administratively

He is closely involved with training programs for young and emerging artists through the FirstHand program and as a tutor for WAAPA. Michael’s work reinterprets contemporary puppetry technique, recontextualising puppets, objects and performers in new frameworks.

faithful to making puppetry when other exponents in Australia have closed their doors. [The Company] wins praise from adult viewers as well as the child audiences, always raucously appreciative, that flock to Spare Parts. – The Australian

As Australia’s flagship puppetry company, we create uniquely Australian works that have inter-generational appeal and are of a world-class standard.

We create stories and visual narratives that have emotional resonance with both children and adults and that promote reflection and conversation.

We embrace opportunities to explore and influence creative practice and to experiment with new performance languages.

Our artistic vision and choices are guided by a desire to tell stories that celebrate what it is to be human. We explore themes that address the complexity of contemporary life.

We are excited about creating works that captivate and stimulate our audience emotionally and intellectually and offer opportunities for greater participation, expression and agency.

Spare Parts has a long serving commitment to artist and art form development. The School of Puppetry is one-of-a-kind in Australia. It offers unique opportunities for artists who are interested in puppetry to learn, connect, develop and work with acclaimed puppeteers. The FirstHand emergent puppetry artist training program offers intensive skills training and mentorship for emergent puppetry artists. Each year we offer a two-week training intensive that artists fly from around Australia to attend. We are a unique site for mid-career and established artist development. Professional artists receive support through the Company Associate program, which offers internships,

mentoring, presentation partnering and employment opportunities. Students, teachers, children and adults are also invited to explore puppetry with Spare Parts Puppet Theatre through a range of workshops and special events. In partnership with WAAPA we deliver the only formal training for puppetry in Australia. Spare Parts Puppet Theatre is now considered to be a leader in puppetry training and development with its programs attracting global interest.

A much-loved work of the company based on the book by Tim Winton, Bugalugs has had four seasons in Fremantle and has toured nationally and internationally.

Directed by Michael Barlow, Fox is based on the award-winning children’s book by Margaret Wild and Ron Brooks. Critically acclaimed premiere season.

A collaboration with the Wheatbelt community of Merredin, Farm was nominated for six Performing Arts WA Awards.

Awarded the Fremantle Chamber of Commerce Business of the Year and Outstanding Cultural Enterprise awards.

“…an impressive force in storytelling through puppetry.” – The Australia Times