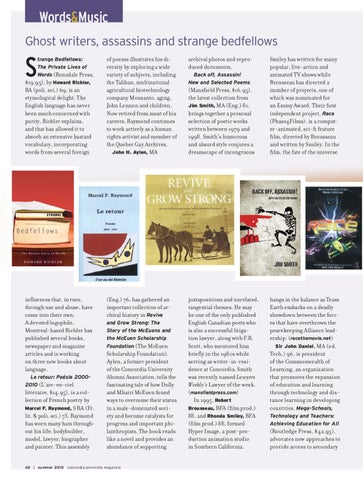 $19.95), by Howard Richler, BA (poli. sci.) 69, is an etymological delight. The English language has never been much concerned with purity, Richler explains, and that has allowed it to absorb an extensive bastard vocabulary, incorporating words from several foreign

influences that, in turn, through use and abuse, have come into their own. A devoted logophile, Montreal-based Richler has published several books, newspaper and magazine articles and is working on three new books about language. Le retour: Poésie 20002010 (L’arc-en-ciel

of poems illustrates his diversity by exploring a wide variety of subjects, including the Taliban, multinational agricultural biotechnology company Monsanto, aging, John Lennon and children. Now retired from most of his careers, Raymond continues to work actively as a human rights activist and member of the Quebec Gay Archives. John H. Aylen, MA

(Eng.) 76, has gathered an important collection of archival history in Revive and Grow Strong: The Story of the McEuens and the McEuen Scholarship Foundation (The McEuen

Scholarship Foundation). Aylen, a former president of the Concordia University Alumni Association, tells the fascinating tale of how Dolly and Mhairi McEuen found ways to overcome their status in a male-dominated society and become catalysts for progress and important philanthropists. The book reads like a novel and provides an abundance of supporting

archival photos and reproduced documents. Back off, Assassin! New and Selected Poems

(Mansfield Press, $16.95), the latest collection from Jim Smith, MA (Eng.) 81, brings together a personal selection of poetic works written between 1979 and 1998. Smith’s humorous and absurd style conjures a dreamscape of incongruous

juxtapositions and unrelated, tangential themes. He may be one of the only published English Canadian poets who is also a successful litigation lawyer, along with F.R. Scott, who mentored him briefly in the 1980s while serving as writer-in-residence at Concordia. Smith was recently named Lawyers Weekly’s Lawyer of the week. (mansfieldpress.com) In 1995, Robert Brousseau, BFA (film prod.) 88, and Rhonda Smiley, BFA (film prod.) 88, formed Hyper Image, a post-production animation studio in Southern California.

Smiley has written for many popular, live-action and animated TV shows while Brousseau has directed a number of projects, one of which was nominated for an Emmy Award. Their first independent project, Race (Phase4Films), is a computer-animated, sci-fi feature film, directed by Brousseau and written by Smiley. In the film, the fate of the universe

hangs in the balance as Team Earth embarks on a deadly showdown between the forces that have overthrown the peacekeeping Alliance leadership. (racethemovie.net) Sir John Daniel, MA (ed. Tech.) 96, is president of the Commonwealth of Learning, an organization that promotes the expansion of education and learning through technology and distance learning in developing countries. Mega-Schools, Technology and Teachers: Achieving Education for All