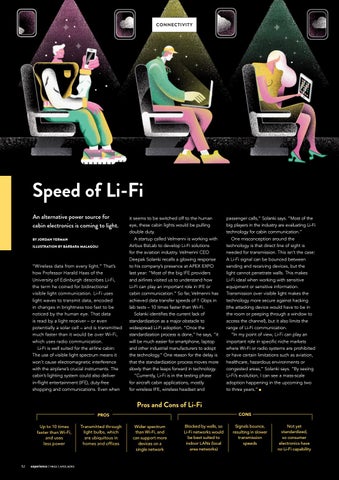 Speed of Li-Fi An alternative power source for cabin electronics is coming to light. BY JORDAN YERMAN ILLUSTRATION BY BÁRBARA MALAGOLI

“Wireless data from every light.” That’s how Professor Harald Haas of the University of Edinburgh describes Li-Fi, the term he coined for bidirectional visible light communication. Li-Fi uses light waves to transmit data, encoded in changes in brightness too fast to be noticed by the human eye. That data is read by a light receiver – or even potentially a solar cell – and is transmitted much faster than it would be over Wi-Fi, which uses radio communication. Li-Fi is well suited for the airline cabin: The use of visible light spectrum means it won’t cause electromagnetic interference with the airplane’s crucial instruments. The cabin’s lighting system could also deliver in-flight entertainment (IFE), duty-free shopping and communications. Even when

it seems to be switched off to the human eye, these cabin lights would be pulling double duty. A startup called Velmenni is working with Airbus BizLab to develop Li-Fi solutions for the aviation industry. Velmenni CEO Deepak Solanki recalls a glowing response to his company’s presence at APEX EXPO last year: “Most of the big IFE providers and airlines visited us to understand how Li-Fi can play an important role in IFE or cabin communication.” So far, Velmenni has achieved data transfer speeds of 1 Gbps in lab tests – 10 times faster than Wi-Fi. Solanki identifies the current lack of standardization as a major obstacle to widespread Li-Fi adoption. “Once the standardization process is done,” he says, “it will be much easier for smartphone, laptop and other industrial manufacturers to adopt the technology.” One reason for the delay is that the standardization process moves more slowly than the leaps forward in technology. “Currently, Li-Fi is in the testing phase for aircraft cabin applications, mostly for wireless IFE, wireless headset and

passenger calls,” Solanki says. “Most of the big players in the industry are evaluating Li-Fi technology for cabin communication.” One misconception around the technology is that direct line of sight is needed for transmission. This isn’t the case: A Li-Fi signal can be bounced between sending and receiving devices, but the light cannot penetrate walls. This makes Li-Fi ideal when working with sensitive equipment or sensitive information. Transmission over visible light makes the technology more secure against hacking (the attacking device would have to be in the room or peeping through a window to access the channel), but it also limits the range of Li-Fi communication. “In my point of view, Li-Fi can play an important role in specific niche markets where Wi-Fi or radio systems are prohibited or have certain limitations such as aviation, healthcare, hazardous environments or congested areas,” Solanki says. “By seeing Li-Fi’s evolution, I can see a mass-scale adoption happening in the upcoming two to three years.”

Pros and Cons of Li-Fi CONS

PROS Up to 10 times faster than Wi-Fi, and uses less power

Transmitted through light bulbs, which are ubiquitous in homes and offices

Wider spectrum than Wi-Fi, and can support more devices on a single network

Blocked by walls, so Li-Fi networks would be best suited to indoor LANs (local area networks)

Not yet standardized, so consumer electronics have no Li-Fi capability 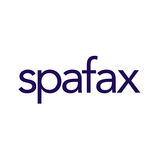