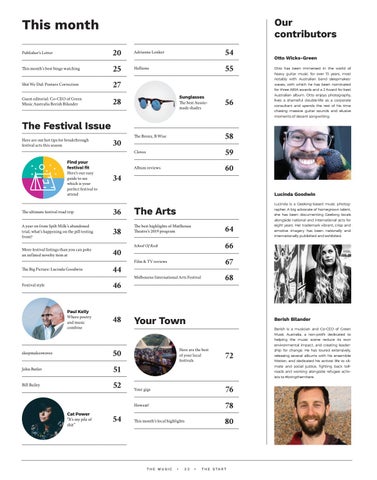 Otto Wicks-Green Otto has been immersed in the world of heavy guitar music for over 15 years, most notably with Australian band sleepmakes-

waves, with which he has been nominated for three ARIA awards and a J Award for best

Australian album. Otto enjoys photography, lives a shameful double-life as a corporate consultant and spends the rest of his time chasing massive guitar sounds and elusive moments of decent songwriting.

The ultimate festival road trip A year on from Spilt Milk’s abandoned trial, what’s happening on the pill testing front? More festival listings than you can poke an inflated novelty item at The Big Picture: Lucinda Goodwin

The Bronx, B Wise

rapher. A big advocate of homegrown talent, she has been documenting Geelong locals

Berish Bilander Berish is a musician and Co-CEO of Green Music Australia, a non-profit dedicated to helping the music scene reduce its own

Here are the best of your local festivals

ship for change. He has toured extensively, releasing several albums with his ensemble Motion, and dedicated his activist life to climate and social justice, fighting back tollroads and working alongside refugee activists to #bringthemhere.

The Music is a free, monthly magazine distributed throughout Melbourne, Sydney and Brisbane. From local insights and insider knowledge to interviews and profiles with the biggest international acts in the world, The Music has the most comprehensive nationwide coverage of Australia’s music scene, and so much more. With content encompassing arts, culture, lifestyle, news and opinion, delivered with sharp, intelligent design, The Music is your essential guide to pop culture, the zeitgeist, and Aussie entertainment. 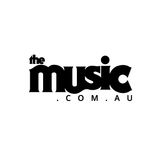