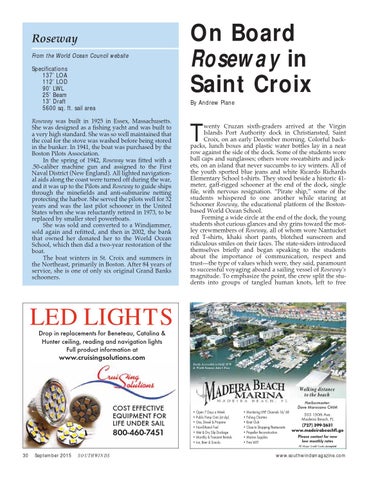 On Board Roseway in Saint Croix By Andrew Plane

Roseway was built in 1925 in Essex, Massachusetts. She was designed as a fishing yacht and was built to a very high standard. She was so well maintained that the coal for the stove was washed before being stored in the bunker. In 1941, the boat was purchased by the Boston Pilots Association. In the spring of 1942, Roseway was fitted with a .50-caliber machine gun and assigned to the First Naval District (New England). All lighted navigational aids along the coast were turned off during the war, and it was up to the Pilots and Roseway to guide ships through the minefields and anti-submarine netting protecting the harbor. She served the pilots well for 32 years and was the last pilot schooner in the United States when she was reluctantly retired in 1973, to be replaced by smaller steel powerboats. She was sold and converted to a Windjammer, sold again and refitted, and then in 2002, the bank that owned her donated her to the World Ocean School, which then did a two-year restoration of the boat. The boat winters in St. Croix and summers in the Northeast, primarily in Boston. After 84 years of service, she is one of only six original Grand Banks schooners.

wenty Cruzan sixth-graders arrived at the Virgin Islands Port Authority dock in Christiansted, Saint Croix, on an early December morning. Colorful backpacks, lunch boxes and plastic water bottles lay in a neat row against the side of the dock. Some of the students wore ball caps and sunglasses; others wore sweatshirts and jackets, on an island that never succumbs to icy winters. All of the youth sported blue jeans and white Ricardo Richards Elementary School t-shirts. They stood beside a historic 41meter, gaff-rigged schooner at the end of the dock, single file, with nervous resignation. “Pirate ship,” some of the students whispered to one another while staring at Schooner Roseway, the educational platform of the Bostonbased World Ocean School. Forming a wide circle at the end of the dock, the young students shot curious glances and shy grins toward the motley crewmembers of Roseway, all of whom wore Nantucket red T-shirts, khaki short pants, blotched sunscreen and ridiculous smiles on their faces. The state-siders introduced themselves briefly and began speaking to the students about the importance of communication, respect and trust—the type of values which were, they said, paramount to successful voyaging aboard a sailing vessel of Roseway’s magnitude. To emphasize the point, the crew split the students into groups of tangled human knots, left to free

Walking distance to the beach 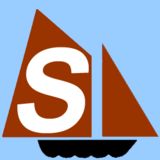