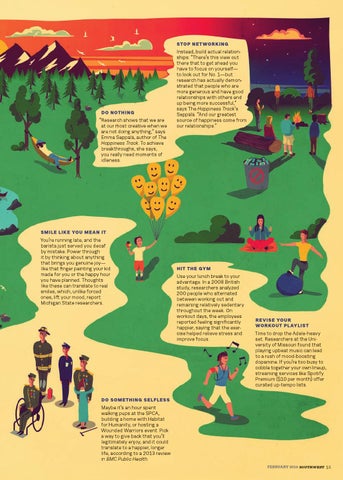 DO NOTHING “Research shows that we are at our most creative when we are not doing anything,” says Emma Seppälä, author of The Happiness Track. To achieve breakthroughs, she says, you really need moments of idleness.

Instead, build actual relationships: “There’s this view out there that to get ahead you have to focus on yourself— to look out for No. 1—but research has actually demonstrated that people who are more generous and have good relationships with others end up being more successful,” says The Happiness Track’s Seppälä. “And our greatest source of happiness come from our relationships.”

SMILE LIKE YOU MEAN IT You’re running late, and the barista just served you decaf by mistake. Power through it by thinking about anything that brings you genuine joy— like that finger painting your kid made for you or the happy hour you have planned. Thoughts like these can translate to real smiles, which, unlike forced ones, lift your mood, report Michigan State researchers.

HIT THE GYM Use your lunch break to your advantage. In a 2008 British study, researchers analyzed 200 people who alternated between working out and remaining relatively sedentary throughout the week. On workout days, the employees reported feeling significantly happier, saying that the exercise helped relieve stress and improve focus.

REVISE YOUR WORKOUT PLAYLIST Time to drop the Adele-heavy set. Researchers at the University of Missouri found that playing upbeat music can lead to a rush of mood-boosting dopamine. If you’re too busy to cobble together your own lineup, streaming services like Spotify Premium ($10 per month) offer curated up-tempo lists.

DO SOMETHING SELFLESS Maybe it’s an hour spent walking pups at the SPCA, building a home with Habitat for Humanity, or hosting a Wounded Warriors event. Pick a way to give back that you’ll legitimately enjoy, and it could translate to a happier, longer life, according to a 2013 review in BMC Public Health. february 2016 southwest 51

The Happiness Issue: Jack Black reflects on his ongoing quest for authentic happiness; a guide for mapping out your ideal day from start to finish; and tips on traveling with purpose. 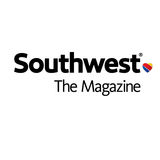