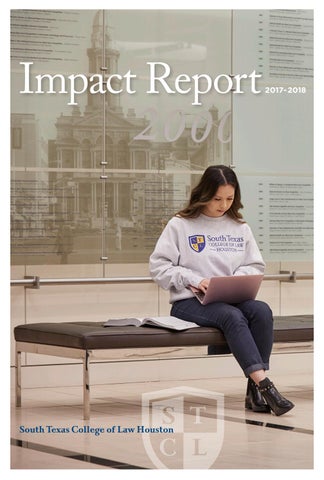 The STCL Houston Impact Report is an annual opportunity to share some of the yearâ&#x20AC;&#x2122;s biggest triumphs: fresh programs, championship trophies, and plans for the future. More importantly, it is a chance to recognize you â&#x20AC;&#x201D; the generous donors and volunteers who help drive forward our mission of providing an exceptional legal education to our diverse student body. This school year marks my 10th and final as dean of STCL Houston. We have accomplished a lot together, and I hope you share in the pride of our achievements. Of course, great works take time. An institution like ours succeeds because of people who have the vision to see where we can go and the faith to invest in that future. You demonstrate that compassion and commitment each time you make a financial contribution, volunteer to coach or judge competitions, or share your love of South Texas with a potential student. I look forward to witnessing what this community achieves over the next 10 years and beyond. With supporters like you standing behind it, STCL Houston surely will continue to shine. On behalf of our students, faculty, and staff, thank you for all you have done and all you continue to do. Warm regards,

“There are a multitude of legal issues that surround animals, but unlike humans, they do not have a voice or the ability to advocate for themselves. I have a particular interest in finding a solution to the jurisdictional and property rights conflicts regarding animal law in Texas, and I am focusing my research in that area.” – Nikki Lapine ’18 In the 2017–2018 fiscal year, STCL Houston introduced two new programs to the Randall O. Sorrels Legal Clinics, now totaling 19 practice areas. Students in the new Animal Law Clinic assist organizations and attorneys involved in animal protection litigation, legislation, and policy work. Their first major outreach project is a comprehensive disaster-readiness manual for community organizations, developed in response to the devastating effects Hurricane Harvey had on area animals. The manual sets out specific protocols and best practices for animal protection before, during, and after a catastrophic event. The law school recently received a generous grant from the Houston Immigration Legal Services Collaborative — with financial backing from The Beacon Fund — to establish an Advanced Immigration Clinic with a focus on providing deportation removal defense, an area of advocacy that has changed rapidly in policy and scope over the past two years. The Basic Immigration Clinic also has expanded its advocacy and outreach to train pro bono attorneys on pertinent immigration issues, raise awareness about immigrants’ rights, and provide other civil legal assistance for its clients. Learn more about what’s happening in our Randall O. Sorrels Legal Clinics at stcl.edu/clinics.

2018 Gala raises $325,000 for student scholarships In celebration of the law school’s 95th anniversary, more than 300 guests gathered in April to reconnect with former classmates and raise money for scholarships through a “paddles up” auction. The night ended with a grand total of $325,000 raised. With an average scholarship award of $5,000, the funds will support up to 65 deserving students. Thank you to all who participated and who continue to give generously of your time, talents, and treasures to support the law school’s mission. Join us at The Gala 2019

Purchase your tickets at stcl.edu/gala.

Alumni, Beaumont Foundation honor Treece with endowed scholarship STCL Houston alumni and friends recently answered a challenge by the Beaumont Foundation of America, matching its $100,000 gift to establish the T. Gerald Treece Endowed Scholarship at the law school. Named for T. Gerald Treece — STCL Houston vice president, associate dean, and director of the school’s renowned Advocacy program since 1978 — the endowed scholarship will be awarded annually to benefit exceptional students in the Advocacy Program who have demonstrated a significant financial need. Thirty-eight donors each contributed $2,500 or more to help meet the challenge, earning membership in the “Coach’s Circle” giving society and commemorating Treece’s 40th anniversary at the law school with a gift that will keep on giving for years to come.

Professor Kulander wins esteemed Fulbright Award Professor Christopher S. Kulander recently received the prestigious J. William Fulbright Award to conduct legal research and teach a course titled, “International Energy Law and Economics” at Vytautas Magnus University (VMU) in Kaunas, Lithuania. Kulander joins the more than 380,000 scholars — including 59 Nobel Laureates, 82 Pulitzer Prize winners, and 16 Presidential Medal of Freedom recipients — who have participated in the esteemed scholastic exchange program since its inception in 1946. Kulander’s research seeks to determine the economic, political, and legal possibility of exporting significant amounts of North American-sourced liquefied natural gas (LNG) to the Baltic region, whether local sources of natural gas may augment the area’s imported LNG, and whether this American-led effort may deliver some measure of economic and geopolitical security to the region. Keep up with faculty scholarly publications and media contributions at stcl.edu/facpub.

With a generous gift from alumnus Richard H. Anderson Jr. ’82, the law school has made improvements to its bar exam preparation program to address recent, nationwide trends toward falling test scores. Among other measures, STCL Houston has taken action by adjusting thresholds for identifying at-risk students, implementing mentoring and coaching programs, and auditing bar-related courses in the curriculum to assure the law school’s curricular content, teaching objectives, and outcomes align with Multistate Bar Examination outlines provided by the National Conference of Bar Examiners. In the spring 2018 semester, the law school’s bar preview course had more than 150 students, organized into small groups led by a team of coaches. The course focuses on improving test-taking skills, reinforcing accumulated knowledge, and delivering personalized feedback on practice exams and essays.

“We provide our students with an invaluable legal education that can only be put to good use in society when they are licensed to practice law. That’s why I put my support behind the bar pass program.” – Richard H. Anderson Jr. ‘82

Alternative Dispute Resolution and Advocacy teams continue to shine At STCL Houston, we pride ourselves on preparing students to be practice-ready and begin contributing to the profession from their first day of work. Hands-on training through our Advocacy program and the Frank Evans Center for Conflict Resolution help us deliver on that commitment. This year, our students proved their skill in both courtroom representation and alternative dispute resolution (ADR) at numerous regional, national, and international law competitions. South Texas continues to be the top advocacy law school in the nation, with an incomparable 131 national championships. ADR teams have earned 17 world championships and an unprecedented four wins in the past year alone!

“We appreciate all the support we’ve received for the Frank Evans Center — from alumni who volunteer as judges for competitions to local firms like Porter Hedges, who sponsors our annual intramural tournament. You help make the ADR program possible!” – Debra Berman, director, Frank Evans Center for Conflict Resoultion

Interested in volunteering as a coach or judge? Visit my.stcl.edu for information.

Scholarships As higher education costs continue to rise, STCL Houston is proud to be among the nationâ&#x20AC;&#x2122;s best values for private law schools. Generous gifts from foundations, businesses, and individuals help us to offset minor operating costs, maintain affordable tuition rates, and offer competitive scholarship awards. Scholarships, in particular, allow our students to graduate with less debt, giving them the flexibility to take more risks such as dedicating more time to pro bono work or taking a job as a public defender. Your support is integral to our mission to provide an exceptional legal education to a diverse body of students, preparing them to serve their community with distinction.

Established in 2013 to commemorate the year the law school was founded, the 1923 Society honors alumni, donors, and special supporters who have made cumulative gifts of $25,000 or more.

“As a part-time student, I balance a full-time job with evening classes. My scholarship award relieves some of my financial burden; for that, I am truly grateful.”

Named in honor of the judge and professor who devoted nearly 60 years to the law school’s mission, the Spurgeon E. Bell Fellows Society honors supporters who have donated $1,000 or more in the fiscal year.

“I plan to incorporate pro bono work into my legal career. This scholarship allows me to focus on my true passion — serving others — rather than pursuing the highest-paying jobs simply to repay loans.”

Consecutive Giving In addition to our giving societies, we also provide special recognition for those who have given to the law school every year for five or more consecutive years. An annual gift, regardless of amount, is a valuable investment in the future. 30+ years of giving Karen H. Garcia and Roland Garcia Jr. ’86 Connie Hays and Michael S. Hays ’74 Ann M. Trentin and Michael S. Keenan ’84 Imogen S. Papadopoulos ’84 William B. Stripling Jr. ’72 20-29 years of giving Candyce T. Beneke ’94 and Bruce E. Beneke The Hon. Jay W. Burnett ’73 and Associate Dean Catherine Greene Burnett Judith A. Dunn ’89 Nez S. Gross and H. Michael Gross ’71 Jennifer B. Hogan and Richard P. Hogan ’85

“After a difficult spring semester and taking nine hours in the summer session, receiving a scholarship award gave me the boost of confidence I needed to finish my legal education strong. It was a relief to know not everything rests on my shoulders and there are amazing people willing to help.”

“I’m supporting myself financially through law school, so every bit of support helps. I am truly grateful to be a scholarship recipient.”

“Both my wife and I work in the public sector. My scholarship award helped me rely less on loans and remove some financial burden from my family.”

Join us for a night of dinner and dancing, benefiting student scholarships. saturday, may 4, 2019 the ballroom at bayou place houston, texas 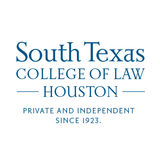 The STCL Houston Impact Report is an annual opportunity to share some of the year’s biggest triumphs: fresh programs, championship trophies,...

The STCL Houston Impact Report is an annual opportunity to share some of the year’s biggest triumphs: fresh programs, championship trophies,...