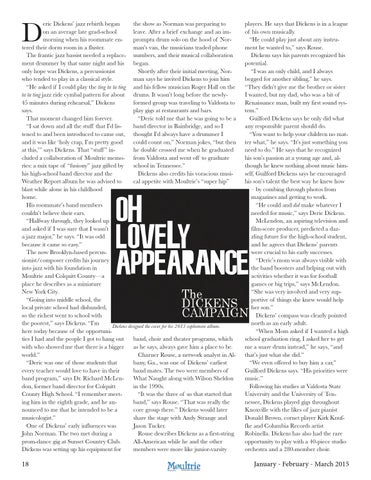 the show as Norman was preparing to eric Dickens’ jazz rebirth began leave. After a brief exchange and an imon an average late grad-school promptu drum solo on the hood of Normorning when his roommate enman’s van, the musicians traded phone tered their dorm room in a fluster. The frantic jazz bassist needed a replace- numbers, and their musical collaboration began. ment drummer by that same night and his Shortly after their initial meeting, Noronly hope was Dickens, a percussionist man says he invited Dickens to join him who tended to play in a classical style. “He asked if I could play the ting ta ta ting and his fellow musician Roger Hall on the ta ta ting jazz ride cymbal pattern for about drums. It wasn’t long before the newlyformed group was traveling to Valdosta to 45 minutes during rehearsal,” Dickens play gigs at restaurants and bars. says. “Deric told me that he was going to be a That moment changed him forever. band director in Bainbridge, and so I “I sat down and all the stuff that I’d listened to and been introduced to came out, thought I’d always have a drummer I could count on,” Norman jokes, “but then and it was like ‘holy crap, I’m pretty good he double crossed me when he graduated at this,’” says Dickens. That “stuff ” included a collaboration of Moultrie memo- from Valdosta and went off to graduate school in Tennessee.” ries: a mix tape of “fusiony” jazz gifted by Dickens also credits his voracious musihis high-school band director and the cal appetite with Moultrie’s “super hip” Weather Report album he was advised to blast while alone in his childhood home. His roommate’s band members couldn’t believe their ears. “Halfway through, they looked up and asked if I was sure that I wasn’t a jazz major,” he says. “It was odd because it came so easy.” The now Brooklyn-based percussionist/composer credits his journey into jazz with his foundation in Moultrie and Colquitt County—a place he describes as a miniature New York City. “Going into middle school, the local private school had disbanded, so the richest went to school with the poorest,” says Dickens. “I’m Dickens designed the cover for his 2013 sophomore album. here today because of the opportuniband, choir and theater programs, which ties I had and the people I got to hang out as he says, always gave him a place to be. with who showed me that there is a bigger Charner Rouse, a network analyst in Alworld.” bany, Ga., was one of Dickens’ earliest “Deric was one of those students that band mates. The two were members of every teacher would love to have in their What Naught along with Wilson Sheldon band program,” says Dr. Richard McLenin the 1990s. don, former band director for Colquitt “It was the three of us that started that County High School. “I remember meetband,” says Rouse. “That was really the ing him in the eighth grade, and he ancore group there.” Dickens would later nounced to me that he intended to be a share the stage with Andy Strange and musicologist.” Jason Tucker. One of Dickens’ early influences was Rouse describes Dickens as a first-string John Norman. The two met during a All-American while he and the other prom-dance gig at Sunset Country Club. members were more like junior-varsity Dickens was setting up his equipment for

players. He says that Dickens is in a league of his own musically. “He could play just about any instrument he wanted to,” says Rouse. Dickens says his parents recognized his potential. “I was an only child, and I always begged for another sibling,” he says. “They didn’t give me the brother or sister I wanted, but my dad, who was a bit of Renaissance man, built my first sound system.” Guilford Dickens says he only did what any responsible parent should do. “You want to help your children no matter what,” he says. “It’s just something you need to do.” He says that he recognized his son’s passion at a young age and, although he knew nothing about music himself, Guilford Dickens says he encouraged his son’s talent the best way he knew how – by combing through photos from magazines and getting to work. “He could and did make whatever I needed for music,” says Deric Dickens. McLendon, an aspiring television and film-score producer, predicted a dazzling future for the high-school student, and he agrees that Dickens’ parents were crucial to his early successes. “Deric’s mom was always visible with the band boosters and helping out with activities whether it was for football games or big trips,” says McLendon. “She was very involved and very supportive of things she knew would help her son.” Dickens’ compass was clearly pointed north as an early adult. “When Mom asked if I wanted a high school graduation ring, I asked her to get me a snare drum instead,” he says, “and that’s just what she did.” “We even offered to buy him a car,” Guilford Dickens says. “His priorities were music.” Following his studies at Valdosta State University and the University of Tennessee, Dickens played gigs throughout Knoxville with the likes of jazz pianist Donald Brown, cornet player Kirk Knuffke and Columbia Records artist Robinella. Dickens has also had the rare opportunity to play with a 40-piece studio orchestra and a 280-member choir. 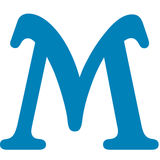