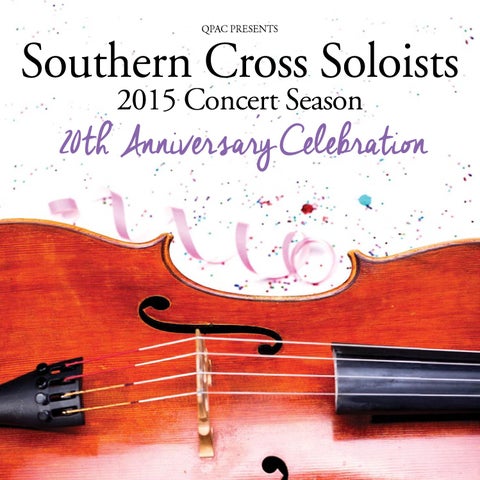 2015 marks Southern Cross Soloistsâ&#x20AC;&#x2122; 20th Anniversary and what a season to celebrate! Established in Brisbane in 1995 and now an internationally successful ensemble, Southern Cross Soloists has helped set the benchmark for Australian chamber music. With a well-deserved reputation for artistic excellence, the Soloists continue to delight audiences with their constantly evolving repertoire and annual programs. As Company in Residence at the Queensland Performing Arts Centre, the ensemble enjoys a busy schedule of regional and national performances and is regularly joined by visiting international artists. The ensemble presents the Bangalow Music Festival, held in August each year, and develops Australian youth musical talent through their award winning Music School regional education program. To mark the 20th Anniversary, esteemed guests from around the country will perform with them. We hope you enjoy their exquisite 2015 celebratory program.

In the Style of Albeniz

Nights in the Garden of Spain

French Revelations Piers Lane Piano Marshall McGuire Harp Southern Cross Soloists continue their 20th birthday celebrations with a program of exquisite French ‘musique pour la chambre’. French Revelations offers a potpourri of French masterworks with special guests Piers Lane and Marshall McGuire. Starting with one of the most radical baroque works ever written in Jean-Fery Rebel’s Le Chaos, the concert takes us on a journey through the romantic and impressionist periods of French music. Add the quirky delights of Poulenc’s famous wind music and topped off with the magnificent Allegro and Presto finale from Saint Saëns’ legendary Piano Concerto No. 2 for a superb afternoon of French Revelations!

Allegro Scherzando and Presto from Piano Concerto No. 2 in G minor Op. 22

Great Legends Teddy Tahu Rhodes Bass-Baritone Jayson Gillham Piano The final performance in the Southern Cross Soloists superb 20th birthday season at QPAC features celebrated bass-baritone Teddy Tahu Rhodes, who joins the Soloists for the first time in a concert dedicated to great composers and legendary characters. All the way from London, acclaimed Australian pianist Jayson Gillham takes to the stage with the Soloists as guest in this exciting program. This concert includes a world premiere commission from Hollywood-based Australian ‘composer of the moment’ Joseph Twist based on speeches by great minds of the 21st century including Stephen Hawking and Steve Jobs. Powerhouse works from Beethoven, Mendelssohn, Schubert, Purcell and Grieg also feature, highlighting the talents of the Soloists and their guests. Don’t miss this truly momentous finale to the Southern Cross Soloists birthday year! PROGRAM Purcell

Guest artists Bella España Slava Grigoryan Guitar Regarded as a ‘wizard’ of the guitar, Slava has forged a prolific reputation as a classical guitar virtuoso. At the age of 17, he was signed to Sony Classical Label and at 18, completed his first international tour. Since then, Slava has travelled through Europe, Asia and North America as a soloist. He has appeared with numerous leading orchestras, among them the London Philharmonic, and won numerous awards, including an ARIA for Best Classical Album. Since 2009, Slava has been Artistic Director of the Adelaide International Guitar Festival.

French Revelations Piers Lane Piano London-based Australian pianist Piers Lane is one of the most inquisitive and engaging live performers of his generation. In great demand as soloist and collaborative artist, recent highlights include a performance of Busoni’s mighty Piano Concerto at Carnegie Hall, premieres of Carl Vine’s Second Piano Concerto, written for him, with the Sydney Symphony and the London Philharmonic, and a sold-out performance of Chopin’s complete Nocturnes at Wigmore Hall.

Great Legends Teddy Tahu Rhodes Bass-Baritone New Zealand bass-baritone Teddy Tahu Rhodes has rapidly established an international career on both the opera stage and the concert platform. At the outset of his career he was a finalist in the Kathleen Ferrier Award and represented New Zealand in the 1999 Cardiff Singer of the World competition. Awards include an ARIA, two Helpmann Awards/Best Male Operatic Performer, and the 2006 Limelight Award. Most recently, Teddy has been honoured with a Green Room Award for Best Male Artist in a Leading Role for his performance of Don Giovanni for Opera Australia plus a MO Award (Operatic Performer of the Year).

Bella España Alex Raineri Piano Based in both Melbourne and Brisbane, 21 year old pianist Alex Raineri is currently under the tutelage of Leah Horwitz OAM and Timothy Young. An active recitalist, chamber musician and concerto soloist, Alex’s performance experience includes tours of California, South East Asia, Germany and a vast amount of engagements in Australia including several broadcasts on ABC Classic FM and the MBS Networks. Alex is the pianist and Co-Artistic Director of the Brisbane contemporary music ensemble Kupka’s Piano.

French Revelations Marshall McGuire Harp Acclaimed as one of the world’s leading harpists in contemporary and baroque repertoire, Marshall McGuire studied at the Victorian College of the Arts, the Paris Conservatoire and the Royal College of Music, London. He has commissioned and premiered more than 100 new works for harp and has been a member of the ELISION ensemble since 1988. He has performed as a soloist with numerous orchestras internationally, released seven CD’s and been nominated for three ARIA awards. Marshall is currently Co-Artistic Director of Ludovico’s Band and Music Programmer at Arts Centre Melbourne.

Great Legends Jayson Gillham Piano Australian-British pianist Jayson Gillham has emerged as one of the finest pianists of his generation. Internationally regarded for his compelling performances, Jayson has received numerous awards and prizes reaching the finals of some of the world’s leading piano competitions including Leeds, Van Cliburn, and the Chopin Competition. Most recently in June 2014, Jayson was awarded First Prize in the Montreal International Music Competition.

Tania Frazer completed her degree at the Guildhall School of Music in London on full scholarship. Tania has performed as Principal Oboe with the Schleswig-Holstein Orchestra under Maazel, Rostropovich and Solti, the Israel Philharmonic under Mehta and Gergiev, Royal Scottish National, New Zealand Symphony, Jerusalem Symphony, Stavanger Symphony, Montreal Chamber Orchestra, Sydney Symphony, and the Israel Opera. From 2004-2008, Tania was Principal Oboe with the Australian Chamber Orchestra and performed as a soloist on their 2006 European tour. As Southern Cross Soloists’ Creative Director, Tania has been the Musical Director of many productions including The Red Shoes with Expressions Dance Company and Invisible Me for QPAC’s 2012 Out of the Box Festival.

Alan Smith completed post graduate studies at the Robert Schumann Institute in Dusseldorf. He has had extensive experience as a Concertmaster, both within Australia and overseas, and has been a soloist with the Adelaide, Melbourne and Queensland Symphony Orchestras as well as appearing in various chamber music ensembles in Australia and Europe. Alan teaches part-time at the Queensland Conservatorium Griffith University and is also a regular tutor for the Conservatorium orchestras as well as the Queensland Youth Symphony. He plays a violin made by Jose Contreras in 1770.

Emma Sholl has been the Associate Principal Flute with the Sydney Symphony since 2003 and has performed and toured internationally with the many of the world’s finest conductors. In 2002-3, Emma was awarded the Martin Bequest and Dorothy Fraser scholarships to study in Switzerland. During that time she performed in the World Orchestra for Peace under Valery Gergiev. Emma has performed as Guest Principal Flute with the Mahler Chamber Orchestra, Hong Kong Philharmonic, Adelaide and Tasmanian Symphonies and the Australian Chamber Orchestra. Emma is currently a member of the Australian World Orchestra and has performed as a soloist with the Adelaide, Tasmanian and Sydney Symphony Orchestras, Musica Viva and ABC Classic FM. Emma appears courtesy of the Sydney Symphony Orchestra and the Sydney Conservatorium.

Patrick Murphy is currently Cello Performance Fellow at the University of Queensland and is a member of the Australian World Orchestra. Prior to this, he was Lecturer in Cello at the University of Tasmania and the Sydney Conservatorium of Music and also worked regularly with the Sydney Symphony. As a member of the Halcyon String Quartet, Patrick toured the UK and was a resident artist at the Banff Centre in Canada. Patrick was a founding member of the Tankstream Quartet, winning first prize in the Osaka International Chamber Music Competition. Patrick has also won prizes in the Melbourne International Chamber Music Competition (2003) and performed at the wedding of Crown Princess Mary in Copenhagen.

Born in Washington D.C., soprano Margaret Schindler studied voice at the Queensland Conservatorium of Music with Professor Janet Delpratt before extensive study abroad. Margaret was a founding member of the Song Company and sang with Opera Australia from 1986-1988 before joining the Cologne State Opera in 1989 as the recipient of the German Operatic Award from Opera Foundation Australia. Since that time, Margaret has appeared as soloist with major orchestras throughout Australia, New Zealand and Germany in opera, concert, song recital and oratorio. Margaret is the Senior Lecturer in Voice and Head of Vocal Studies at the Queensland Conservatorium of Music Griffith University.

Purchase a three concert package and enjoy the full celebration! Ticket prices are per concert.

A Taste of the Celebration

Purchase a two concert package and get a taste of the celebration! Ticket prices are per concert.

A Hint of the Celebration

Select the type and quantity

All sales are final. Refunds are not available once a booking application has been processed.

Single tickets for each concert are available by calling 136 246 or visiting qpac.com.au. A transaction fee of $6.20 applies per booking. Patrons are able to purchase additional single tickets for other shows when purchasing a package. Please indicate requirements when booking.

Wheelchair and disability access is available at all performances. Please advise when booking if required. Concession prices are available for full pensioners and health care card holders. Student prices are available for full time students with valid Queensland student card. Please quote your Government concession number when booking or supply photocopied proof of eligibility. Bookings without adequate proof cannot be processed. Seating for all concerts is in numbered, reserved seats in the Concert Hall intimate mode. In the event of high ticket demand, QPAC reserves the right to alter the Concert Hall seating and stage arrangement to its original mode. In the event that this occurs, QPAC ensures ticket buyers will be accommodated in an equivalent seat to the intimate mode layout.

Tickets are subject to availability – book early to avoid disappointment.

Group bookings are available for all concerts, including a special price for school groups. Contact QPAC Group Sales on 07 3840 7466 or groups@qpac.com.au

Lost tickets can be replaced. Phone 136 246 to arrange a lost ticket voucher.

Latecomers will be admitted to the Concert Hall at a suitable break in the performance.

Complimentary programs will be available on the day of each concert and issued to patrons upon entry to the Concert Hall.

I have a valid Queensland student card.

Signature All sales are final. No refunds will be made. Please check tickets on receipt.

SUPPORTERS Southern Cross Soloists acknowledges and thanks the following organisations for their generous support:

This project has been assisted by the Australian Government through the Australia Council, its arts funding and advisory board

This project has been assisted by the Australian Government through the Australia Council, its arts funding and advisory board