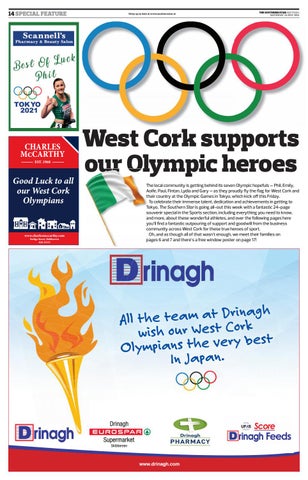 Good Luck to all our West Cork Olympians

West Cork supports our Olympic heroes The local community is getting behind its seven Olympic hopefuls – Phil, Emily, Aoife, Paul, Fintan, Lydia and Gary – as they proudly fly the flag for West Cork and their country at the Olympic Games in Tokyo, which kick off this Friday. To celebrate their immense talent, dedication and achievements in getting to Tokyo, The Southern Star is going all-out this week with a fantastic 24-page souvenir special in the Sports section, including everything you need to know, and more, about these wonderful athletes, and over the following pages here you’ll find a fantastic outpouring of support and goodwill from the business community across West Cork for these true heroes of sport. Oh, and as though all of that wasn’t enough, we meet their families on pages 6 and 7 and there’s a free window poster on page 17!

Best Of Luck to Our West Cork Olympians

From: Ballineen Event: Women’s 200m, Women’s 400m and 4x400m Mixed Relay When in action: Phil Healy will get her Olympics underway on Friday, July 30th with the mixed 4x400m relay, with her 200m heats and semi-finals on Monday, August 2nd and the 400m heats on Tuesday, August 3rd.

All Prices include vat @23%

Win a Playstation Prize Draw from the 14th June—11th September Spend over €20 or more in BOS for a chance to win Full T&amp;C’s available in Store

Best of luck to Phil Healy and the West Cork Olympians in Japan from:

From: Aughadown, Skibbereen Event: Women’s Four When in action: Emily and co, in the Irish women’s four, take to the water in Tokyo in the early hours of this Saturday morning (Irish time). The A and B finals are on early on Wednesday morning, again Irish time. Check Southern Star social media channels for up-to-date race info.

TO OUR WEST CORK OLYMPIANS!

One of the largest law firms in West Cork Over 100 years of legal advice - We offer a full range of legal services to meet your needs.

All the very best to our West Cork athletes in Tokyo

Ireland’s most Southwesterly Point on the Wild Atlantic Way

“One of the best attractions in Ireland...”

Cork County Council Supporting you all the way

Best of luck to Team Ireland We are all supporting you

Best of luck to all our West Cork Olympians in Japan

ROWING From: Aughadown, Skibbereen Event: Men’s Lightweight Double Sculls When in action: Fintan – in the boat alongside Paul O’Donovan – gets his Olympics up and running in the early hours of this Saturday morning (Irish time). Check Southern Star social media channels for info closer to race day.

TOKYO OVERSTAR TAKING THE SOUTHERN to everyone hy has proved s his Fintan McCart f – that he deserve – including himsel nt Irish lightweight THY spoke to place in the domina . KIERAN McCAR cs men’s double ahead of the Olympi the Skibb man

West Cork supports our Olympic heroes Check out our 24-page souvenir special in this week’s Sports section to learn why Fintan McCarthy is the man with the plan.

Terrace Dining with something for everyone CRAFT serving vibrant Tapas with a delicious West Cork twist &amp; Brunch fit for an Olympian!

O’Sullivan TD Good luck to all of West Cork’s Olympians, we are so proud of you. Whatever it is about West Cork, we consistently have incredible athletes. Whatever happens in Tokyo, we will be celebrating you when you come home. “Victory is in having done your best. If you’ve done your best, you’ve won.”

Wishing Phil Healy and all our Olympians the very best of luck in Japan ‘I work with families and businesses to grow, protect and preserve their wealth through multi layered financial planning’

Best wishes to all at the Tokyo Olympics

From: Leap Event: Women’s Lightweight Double Sculls When in action: Lydia is the reserve for the Irish women’s lightweight double.

Good Luck to all athletes taking part in this year&#39;s Olympic Games

Gary Talk to us today O’Donovan

Wishing all UP TO 50% OFF Olympians good

The Dáil is in recess from now until September but we are still working for Cork South West. Please get in touch with me and my team if you have any issues. If we can help at all, we will.

We are so proud of our Olympians. The whole of West Cork is behind you.

Keep Up to Date with what I am working on Weekly, Join my Weekly Update WhatApp Group

Option A Option A 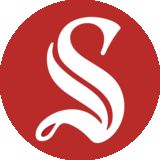