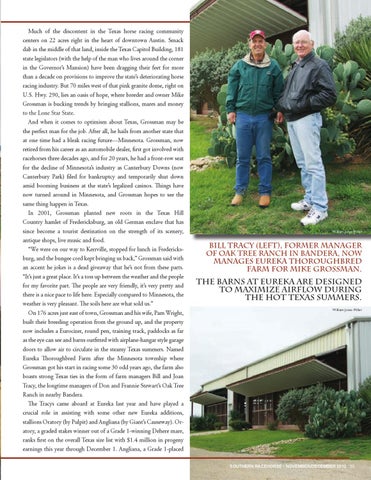 Much of the discontent in the Texas horse racing community centers on 22 acres right in the heart of downtown Austin. Smack dab in the middle of that land, inside the Texas Capitol Building, 181 state legislators (with the help of the man who lives around the corner in the Governor’s Mansion) have been dragging their feet for more than a decade on provisions to improve the state’s deteriorating horse racing industry. But 70 miles west of that pink granite dome, right on U.S. Hwy. 290, lies an oasis of hope, where breeder and owner Mike Grossman is bucking trends by bringing stallions, mares and money to the Lone Star State. And when it comes to optimism about Texas, Grossman may be the perfect man for the job. After all, he hails from another state that at one time had a bleak racing future—Minnesota. Grossman, now retired from his career as an automobile dealer, first got involved with racehorses three decades ago, and for 20 years, he had a front-row seat for the decline of Minnesota’s industry as Canterbury Downs (now Canterbury Park) filed for bankruptcy and temporarily shut down amid booming business at the state’s legalized casinos. Things have now turned around in Minnesota, and Grossman hopes to see the same thing happen in Texas. In 2001, Grossman planted new roots in the Texas Hill Country hamlet of Fredericksburg, an old German enclave that has since become a tourist destination on the strength of its scenery, antique shops, live music and food. “We were on our way to Kerrville, stopped for lunch in Fredericksburg, and the bungee cord kept bringing us back,” Grossman said with an accent he jokes is a dead giveaway that he’s not from these parts. “It’s just a great place. It’s a toss up between the weather and the people for my favorite part. The people are very friendly, it’s very pretty and there is a nice pace to life here. Especially compared to Minnesota, the weather is very pleasant. The soils here are what sold us.” On 176 acres just east of town, Grossman and his wife, Pam Wright, built their breeding operation from the ground up, and the property now includes a Eurocizer, round pen, training track, paddocks as far as the eye can see and barns outfitted with airplane-hangar style garage doors to allow air to circulate in the steamy Texas summers. Named Eureka Thoroughbred Farm after the Minnesota township where Grossman got his start in racing some 30 odd years ago, the farm also boasts strong Texas ties in the form of farm managers Bill and Joan Tracy, the longtime managers of Don and Frannie Stewart’s Oak Tree Ranch in nearby Bandera. The Tracys came aboard at Eureka last year and have played a crucial role in assisting with some other new Eureka additions, stallions Oratory (by Pulpit) and Angliana (by Giant’s Causeway). Oratory, a graded stakes winner out of a Grade 1-winning Dehere mare, ranks first on the overall Texas sire list with $1.4 million in progeny earnings this year through December 1. Angliana, a Grade 1-placed

The barns at Eureka are designed to maximize airflow during the hot Texas summers. William Jones Miller

The latest issue of Southern Racehorse magazine covering Thoroughbred racing and breeding in Texas and Oklahoma. 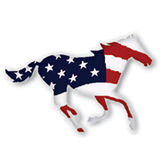