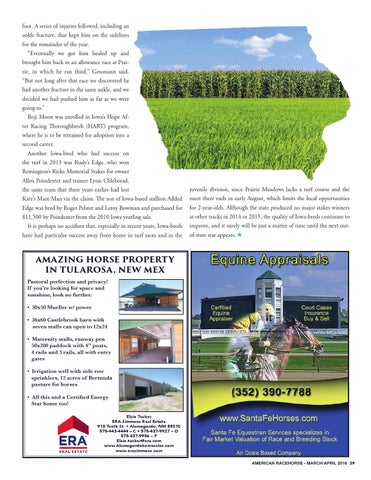 foot. A series of injuries followed, including an ankle fracture, that kept him on the sidelines for the remainder of the year. “Eventually we got him healed up and brought him back in an allowance race at Prairie, in which he ran third,” Gessmann said. “But not long after that race we discovered he had another fracture in the same ankle, and we decided we had pushed him as far as we were going to.” Boji Moon was enrolled in Iowa’s Hope After Racing Thoroughbreds (HART) program, where he is to be retrained for adoption into a second career. Another Iowa-bred who had success on the turf in 2013 was Rudy’s Edge, who won Remington’s Ricks Memorial Stakes for owner Allen Poindexter and trainer Lynn Chleborad, the same team that three years earlier had lost Kate’s Main Man via the claim. The son of Iowa-based stallion Added Edge was bred by Roger Pelster and Leroy Bowman and purchased for $11,500 by Poindexter from the 2010 Iowa yearling sale. It is perhaps no accident that, especially in recent years, Iowa-breds have had particular success away from home in turf races and in the

juvenile division, since Prairie Meadows lacks a turf course and the meet there ends in early August, which limits the local opportunities for 2-year-olds. Although the state produced no major stakes winners at other tracks in 2014 or 2015, the quality of Iowa-breds continues to improve, and it surely will be just a matter of time until the next outof-state star appears. H

This issue of American Racehorse magazine includes articles on Minnesota's Wood-Mere Farm, the success of Iowa-breds around the country, the...

This issue of American Racehorse magazine includes articles on Minnesota's Wood-Mere Farm, the success of Iowa-breds around the country, the...