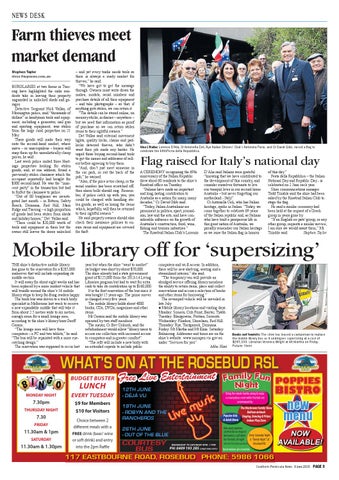 Farm thieves meet market demand Stephen Taylor steve@mpnews.com.au BURGLARIES at two farms in Tuerong have highlighted the risks residents take in leaving their property unguarded in unlocked sheds and garages. Detective Sergeant Nick Vallas, of Mornington police, said “thousands of dollars” in handyman tools and equipment, including a generator, nail gun and sporting equipment, was stolen from the large rural properties on 21 May. These goods will make their way onto the second-hand market, where naïve – or unscrupulous – buyers will snap them up for unrealistically cheap prices, he said. Last week police raided three Hastings properties looking for stolen goods, and, at one address, found a previously stolen chainsaw which the occupant reportedly had bought for $300 second-hand. He was the “innocent party” in the transaction but had to forfeit the chainsaw to police. “Out of 80 burglaries we investigated last month – in Bittern, Safety Beach, Dromana, Red Hill, Main Ridge and Tuerong – a high proportion of goods had been stolen from sheds and holiday homes,” Det. Vallas said. “There could be $20,000 worth of tools and equipment in them but the owner still leaves the doors unlocked

– and yet every tradie needs tools so there is always a ready market for thieves,” he said. “We have got to get the message through. Owners must write down the makes, models, serial numbers and purchase details of all their equipment – and take photographs – so that, if anything gets stolen, we can return it. “The details can be stored online, on memory sticks, in diaries – anywhere – but we need that information as proof of purchase so we can return stolen items to their rightful owners.” Det Vallas said external movement lights, quality locks, chains and padlocks deterred thieves, who didn’t want their job made any harder. He urged those buying second-hand tools to get the names and addresses of sellers before agreeing to buy them. “And, don’t just meet someone in the car park, or out the back of the pub,” he warned. “Also, if the price is too cheap, or the serial number has been scratched off, then alarm bells should ring. Remember, if police catch up with you, you could be charged with handling stolen goods, as well as losing the items which, hopefully, will then be returned to their rightful owners.” He said property owners should also check their insurance policies to ensure items and equipment are covered for theft.

Flag raised for Italy’s national day A CEREMONY recognising the 69th anniversary of the Italian Republic drew about 60 residents to the shire’s Rosebud office on Tuesday. “Italians have made an important and long-lasting contribution to Australia as a nation for many, many decades,” Cr David Gibb said. “Today, Italian Australians are prominent in politics, sport, journalism, law and the arts, and have considerable influence on the growth of Australia’s construction, food, wine, fishing and tourism industries.” The Rosebud Italian Club’s Lorenzo

D’Alia said Italians were grateful “knowing that we have contributed to the development of this country, and consider ourselves fortunate to live our tranquil lives in our second home Australia – but never forgetting our motherland - Italy”. Cr Antonella Celi, who has Italian heritage, spoke in Italian. “Today, we come together to celebrate 69 years of the Italian republic and, as Italians who have built a prosperous life in this great nation of Australia, we proudly remember our Italian heritage as we raise the Italian flag in honour

of this day.” Festa della Repubblica – the Italian National Day and Republic Day - is celebrated on 2 June each year. Shire communications manager Todd Trimble said the shire had been asked by the Rosebud Italian Club to stage the flag. He said a similar ceremony had been held at the request of a Greek group in years gone by. “If an English ex-pats’ group, or any other group, requests a similar service, I am sure we would assist them,” Mr Trimble said. Stephen Taylor

Mobile library off for ‘supersizing’ THE shire’s distinctive mobile library has gone to the renovators for a $285,000 makeover that will include expanding its middle section. It will away for about eight weeks and has been replaced by a more modest vehicle that will trundle around the shire’s 16 mobile library stops to keep far-flung readers happy. The book bus was driven to a truck body specialist in Melbourne last week to receive a new expandable middle that will take it from about 2.5 metres wide to six metres, enough room for a small lounge area, according to the shire’s library boss Geoff Carson. “The lounge area will have three computers – a PC and two tablets,” he said. “The bus will be repainted with a more eyecatching design.” The renovation was supposed to occur last

year but when the shire “went to market” its budget was short by about $70,000. The shire already had a state government grant of $125,000 from the 2013-14 Living Libraries program but had to wait for extra cash to take its contribution up to $160,000. It is the first renovation of the bus since it was bought 15 years ago. The prime mover is changed every five years. The mobile library holds about 4000 books, CDs, DVDs, magazines and other items. Mr Carson said the mobile library was operated by two staff members. The mayor, Cr Bev Colomb, said the refurbishment would allow “library users to access our collection with increased access to computers and in greater comfort”. “The refit will include a new body with an extended capsule to include public

computers and wi-fi access. In addition, there will be new shelving, seating and a streamlined interior,” she said. “The temporary van will provide an abridged service offering library members the ability to return items, place and collect reservations and access a selection of books and other items for borrowing.” The revamped vehicle will be unveiled in late July.  Mobile library locations and visiting days: Monday: Somers, Crib Point, Baxter, Tyabb. Tuesday: Blairgowrie, Portsea, Sorrento. Wednesday: Flinders, Shoreham, Red Hill. Thursday: Rye, Tootgarook, Dromana. Friday: Mt Martha and Mt Eliza. Saturday: Balnarring. Addresses and times are on the shire’s website: www.mornpen.vic.gov.au under “Services for you”. Mike Hast

Books not tourists: The shire has leased a campervan to replace the mobile library bus as it undergoes supersizing at a cost of $285,000. Librarian Veronica Wright at Mt Martha on Friday. Picture: Yanni

WHAT’S ON AT THE ROSEBUD RSL BUDGET BUSTER

Choice between 2 different meals with a

or soft drink) and entry

Bring the whole family along &amp; enjoy a scrumptious meal while the kids are entertained by

19TH JUNE - ROBYN AND THE RANCHEROS