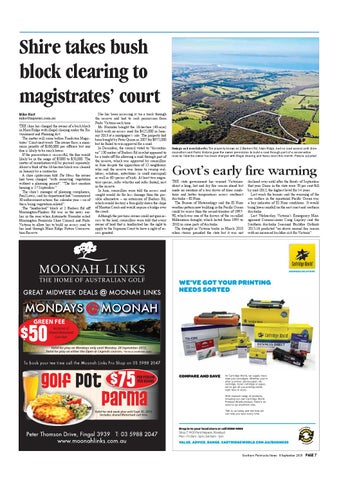 Shire takes bush block clearing to magistrates’ court Mike Hast mike@mpnews.com.au THE shire has charged the owner of a bush block in Main Ridge with illegal clearing under the Environment and Planning Act. The matter will come before Frankston Magistrates’ Court next week. The owner faces a maximum penalty of $180,000 per offence but any fine is likely to be much lower. If the prosecution is successful, the fine would likely be in the range of $5000 to $50,000. The matter of remediation will be pursued separately. About a third of the 16-hectare block was cleared in January by a contractor. A shire spokesman told The News the owner had been charged “with removing vegetation without a planning permit”. “The first mention hearing is 17 September.” The shire’s manager of planning compliance, Paul Lewis, said his department had “commenced 30 enforcement actions this calendar year – six of these being vegetation-related”. The “landlocked” block at 2 Barkers Rd off Mornington-Flinders Rd was in the news earlier in the year when Antoinette Noronho asked Mornington Peninsula Shire Council and Parks Victoria to allow her to build an access road to her land through Main Ridge Nature Conservation Reserve.

She has been accessing it via a track through the reserve and had to seek permission from Parks Victoria each time. Ms Noronho bought the 16-hectare (40-acre) block with no access road for $425,000 in January 2013 at a mortgagee’s sale. The property had been bought by Peter Quinn in 2007 for $975,000 but he failed to win approval for a road. In December, the council voted to “discontinue” 130 metres of Barkers Rd in what appeared to be a trade-off for allowing a road through part of the reserve, which was approved by councillors in June despite the opposition of 12 neighbours who said the reserve was home to swamp wallabies, echidnas, antechinus (a small marsupial) as well as 60 species of birds. At least two migratory species, rufus whistler and rufus fantail, nest in the reserve. In June, councillors were told the access road sought would do far less damage than the possible alternative – an extension of Barkers Rd, which would destroy a fern gully down the slope of Manton Creek and would require a bridge over the creek. Although the previous owner could not gain access to the land, councillors were told that every owner of land that is landlocked has the right to apply to the Supreme Court to have a right of access granted.

Swings and roundabouts: The property known as 2 Barkers Rd, Main Ridge, had no road access until shire councillors and Parks Victoria gave the owner permission to build a road through part of a conservation reserve. Now the owner has been charged with illegal clearing and faces court this month. Picture supplied

Govt’s early fire warning THE state government has warned Victorians about a long, hot and dry fire season ahead but made no mention of a key driver of drier conditions and hotter temperatures across southeast Australia – El Nino. The Bureau of Meteorology said the El Nino weather pattern now building in the Pacific Ocean could be worse than the record-breaker of 199798, which was one of the drivers of the so-called Millennium drought, which lasted from 1995 to 2010 in some parts of Australia. The drought in Victoria broke in March 2010 when storms pounded the state but it was not

declared over until after the floods of September that year. Dams in the state were 70 per cent full by mid-2012, the highest level for 14 years. Last week the bureau said the warming of the sea surface in the equatorial Pacific Ocean was a key indicator of El Nino conditions. It would bring lower rainfall on the east coast and southern Australia. Last Wednesday, Victoria’s Emergency Management Commissioner Craig Lapsley said the Southern Australia Seasonal Bushfire Outlook 2015-16 predicted “an above normal fire season with an increased bushfire risk for Victoria”.

WE’VE GOT YOUR PRINTING NEEDS SORTED

need to go anywhere else.

help your business save every time.