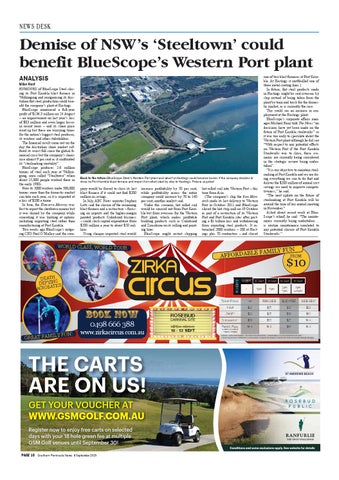 Demise of NSW’s ‘Steeltown’ could benefit BlueScope’s Western Port plant ANALYSIS Mike Hast RUMOURS of BlueScope Steel closing its Port Kembla blast furnace in Wollongong and reorganising its Australian flat steel production could benefit the company’s plant at Hastings. BlueScope announced a full-year profit of $136.3 million on 24 August – an improvement on last year’s loss of $83 million and even larger losses in recent years – and its share price went up but these are worrying times for the nation’s biggest steel producer, its workers and other stakeholders. The financial result came out on the day the Australian share market suffered its worst fall since the global financial crisis but the company’s shares rose almost 9 per cent as it confronted its “steelmaking mortality”. BlueScope produces 2.6 million tonnes of steel each year at Wollongong, once called “Steeltown” when about 25,000 people worked there in the early 1980s. Now its 5000 workers make 500,000 tonnes more than the domestic market can take each year, so it is exported at a loss of $200 a tonne. In June, the Illawarra Mercury was first to report the shutdown rumour but it was denied by the company while conceding it was looking at options including importing steel rather than manufacturing at Port Kembla. Two weeks ago BlueScope’s outgoing CEO Paul O’Malley said the com-

Back to the future: BlueScope Steel’s Western Port plant and wharf at Hastings could become busier if the company decides to close its Port Kembla blast furnace and import hot rolled steel by ship to Hastings. Picture supplied

pany would be forced to close its last blast furnace if it could not find $200 million in savings. In July, ABC News reporter Stephen Letts said the closure of the remaining blast furnace and a restructure – focusing on imports and the higher-margin painted products Colorbond business – could slash capital expenditure from $200 million a year to about $50 million. Using cheaper imported steel would

increase profitability by 50 per cent, while profitability across the entire company could increase by 70 to 140 per cent, another analyst said. Under this scenario, hot rolled coil would be sourced not from Port Kembla but from overseas for the Western Port plant, which makes profitable building products such as Colorbond and Zincalume on its rolling and painting lines. BlueScope might restart shipping

hot rolled coil into Western Port – this time from Asia. (The company’s ship the Iron Monarch made its last delivery to Western Port in October 2011 and BlueScope closed the hot strip mill on 19 October as part of a restructure of its Western Port and Port Kembla sites after posting a $1 billion loss and withdrawing from exporting steel products. It retrenched 2000 workers – 200 at Hastings plus 70 contractors – and closed

one of two blast furnaces at Port Kembla. At Hastings it mothballed one of three metal coating lines.) In future, flat steel products made in Hastings might be sent overseas by ship instead of being taken from the plant by train and truck for the domestic market, as is currently the case. This could see an increase in employment at the Hastings plant. BlueScope’s corporate affairs manager Michael Reay told The News “no decisions have yet been made on the future of Port Kembla steelworks” so it was too early to speculate about the Western Port plant although he did say “With respect to any potential effects on Western Port if the Port Kembla Steelworks was to close, these scenarios are currently being considered in the strategic review being undertaken”. “It is our objective to maintain steelmaking at Port Kembla and we are doing everything we can to do that and deliver the $200 million of annual cost savings we need to improve competitiveness,” he said. “The next update on the future of steelmaking at Port Kembla will be around the time of our annual meeting in November.” Asked about recent work at BlueScope’s wharf, he said: “The maintenance currently being undertaken ... is routine maintenance unrelated to any potential closure of Port Kembla Steelworks.”