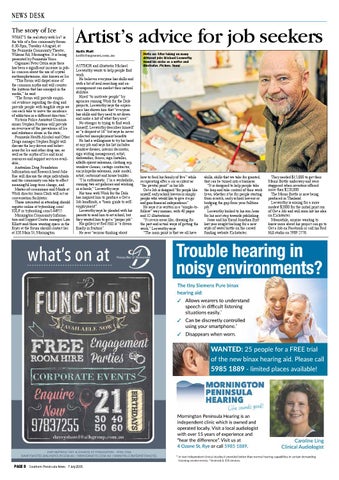 NEWS DESK The story of Ice WHAT’S the real story with Ice? is the title of a free community forum 6.30-9pm, Tuesday 4 August, at the Peninsula Community Theatre, Wilsons Rd, Mornington. It is being presented by Peninsula Voice. Organiser Peter Orton says there has been a significant increase in public concern about the use of crystal methamphetamine, also known as Ice. “This forum will dispel some of the common myths and will counter the hysteria that has emerged in the media,” he said. “The forum will provide empirical evidence regarding the drug and provide people with tangible steps we can each take to move the incidence of addiction in a different direction.” Victoria Police Assistant Commissioner Stephen Fontana will provide an overview of the prevalence of Ice and substance abuse in the state; Peninsula Health Alcohol and Other Drugs manager Stephen Bright will discuss the key drivers and behaviours for Ice and other drug use, as well as the myths of Ice and local resources and support services available; Australian Drug Foundation Information and Research head Julie Rae will discuss the steps individuals and the community can take to effect meaningful long-term change, and Master-of-ceremonies and Minds at Work director Jason Clark will act as conversation facilitator. Those interested in attending should register online at trybooking.com/ IGLF or trybooking.com/144955 Mornington Community Information and Support Centre manager Lisa Elliott said those wanting space in the foyer at the forum should contact her at 320 Main St, Mornington.

Artist’s advice for job seekers Keith Platt keith@mpnews.com.au AUTHOR and illustrator Michael Leeworthy wants to help people find work. He believes everyone has skills and with a bit of soul searching and encouragement can market their natural abilities. Hired “to motivate people” by agencies running Work for the Dole projects, Leeworthy says the experience has shown him that “everyone has skills and they need to sit down and make a list of what they area”. No stranger to trying to find work himself, Leeworthy describes himself as “a dropout at 16” but says he never collected unemployment benefits. He had a willingness to try his hand at any job and says his list includes window dresser, interior decorator, sign writing management, artist, dishwasher, fencer, sign Installer, alfalfa sprout salesman, clothing rep, window cleaner, cartage contractor, encyclopedia salesman, male model, artist, cartoonist and house builder. “I’m enthusiastic. I’m a workaholic, running two art galleries and working in schools,” Leeworthy says. His time with Work for the Dole has inspired him to produce a Get a Job handbook, a “basic guide to selfemployment”. Leeworthy says he pleaded with his parents to send him to art school, but they wanted him to get a “proper job”. His gallery at Red Hill is “a dream finally in fruition”. He sees “serious thinking about

Write on: After taking on many different jobs Michael Leeworthy found his niche as a writer and illustrator. Picture: Yanni

how to feed his family of five” while recuperating after a car accident as “the pivotal point” in his life. Get a Job is designed “for people like myself, early school leavers or simply people who would like to give it a go and gain financial independence”. He says it is written in a “simple-tofollow” way manner, with 40 pages and 32 illustrations. “It covers areas like, dressing for the part and actual ways of getting the work,” Leeworthy says. “The main point is that we all have

skills, skills that we take for granted, that can be turned into a business. “It is designed to help people take the leap and take control of their work lives, whether it be for people starting from scratch, early school leavers or bridging the gap from your fulltime job.” Leeworthy looked to his son Jesse for his next step towards publishing. Jesse and his friend Jonathan Byrt last year sought backing for a new style of water bottle on the crowd funding website Kickstarter.

They needed $15,000 to get their Memo Bottle underway and were staggered when investors offered more than $220,000. The Memo Bottle is now being produced in Thailand. Leeworthy is aiming for a more modest $2000 for the initial print run of Get a Job and will soon list his idea on Kickstarter. Meanwhile, anyone wanting to know more about his project can go to Get a Job on Facebook or call his Red Hill studio on 5989 2776.