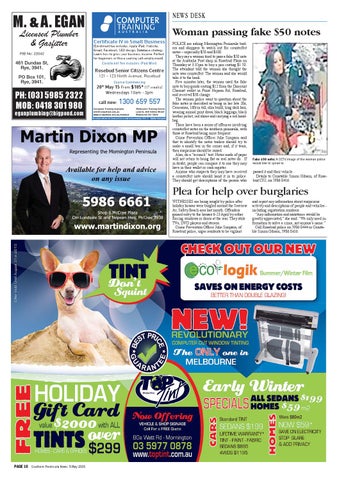 POLICE are asking Mornington Peninsula traders and shoppers to watch out for counterfeit notes – especially $50 and $100. They say a woman tried to pass a fake $50 note at the Australia Post shop in Rosebud Plaza on Thursday at 3.35pm to buy a pen costing $1.50. The attendant told the woman she thought the note was counterfeit. The woman said she would take it to the bank. Five minutes later, the woman used the fake note to buy goods costing $12 from the Discount Chemist outlet in Point Nepean Rd, Rosebud, and received $38 change. The woman police want to question about the fake notes is described as being in her late 20s, Caucasian, 160cm tall, slim build, long dark hair, wearing animal print dress, black leggings, black leather jacket, red shoes and carrying a red handbag. There have been a series of offences involving counterfeit notes on the southern peninsula, with those at Rosebud being more frequent. Crime Prevention Officer Julie Simpson said that to identify the notes traders should try to make a small tear in the corner and, if it tears, then suspicions should be raised. Also, do a “scrunch” test. Notes made of paper will not return to being flat as real notes do. If in doubt, people can compare it to one they may have in their wallet or cash register. Anyone who suspects they may have received a counterfeit note should hand it in to police. They should get descriptions of the person who

Fake $50 note: A CCTV image of the woman police would like to speak to.

passed it and their vehicle. Details to Constable Simon Gibson, of Rosebud CIU, on 5986 0416.

Plea for help over burglaries WITNESSES are being sought by police after holiday houses were burgled around the Seaview Av, Safety Beach area last month. Offenders gained entry to the houses 6-23 April by either forcing windows or doors at the rear. They stole TVs, DVD players and stereos. Crime Prevention Officer Julie Simpson, of Rosebud police, urges residents to be vigilant

and report any information about suspicious activity and descriptions of people and vehicles including registration numbers. “Any information and assistance would be greatly appreciated,” she said. “We only need information to solve a crime, not anyone’s name.” Call Rosebud police on 5986 0444 or Constable Simon Gibson, 5986 0416.