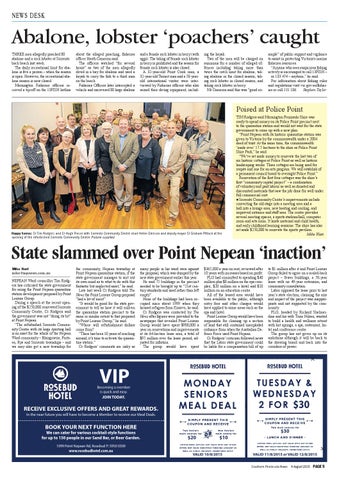 Abalone, lobster ‘poachers’ caught THREE men allegedly poached 80 abalone and a rock lobster at Sorrento back beach last week. The daily recreational limit for abalone is five a person – when the season is open. However, the recreational abalone season is now closed. Mornington Fisheries officers received a tip-off on the 13FISH hotline

about the alleged poaching, fisheries officer Heath Cameron said. The officers watched “for several hours” as two of the men allegedly dived in a bay for abalone and used a kayak to carry the fish to a third man on the beach. Fisheries Officers later intercepted a vehicle and uncovered 80 large abalone

ample” of public support and vigilance to assist in protecting Victoria&#39;s marine fisheries resources. “Anyone who sees suspicious fishing activity is encouraged to call 13FISH – or 133 474 – anytime,” he said. For information about fishing rules and regulations visit vic.gov.au/fisheries or call 131 186. Stephen Taylor

TIM Rodgers said Mornington Peninsula Shire was ready to spend money on its Police Point precinct next to the quarantine station and would not wait for the state government to come up with a new plan. “Point Nepean with its historic quarantine station was given to Victoria by the commonwealth under a 2004 deed of trust. At the same time, the commonwealth ‘made over’ 17.5 hectares to the shire as Police Point Shire Park,” he said. “We’ve set aside money to renovate the last two of six historic cottages at Police Point as well as historic landscaping works. Three cottages are being used for respite and one for an arts program. We will establish of a permanent council board to oversight Police Point.” Renovation of the first four cottages was the shire’s first “community capital project” – a combination of voluntary and paid labour as well as donated and discounted materials that saw the job done for well under full commercial cost.  Sorrento Community Centre’s improvements include converting the old stage into a meeting area and a hall into a lounge area, new heating and cooling, and improved entrance and staff area. The centre provides several meeting spaces, a sports stadium/hall, computer room and arts room. It hosts maternal and child health, and early childhood learning sessions. The shire has also set aside $250,000 to renovate the sports pavilion. Mike Hast

State slammed over Point Nepean ‘inaction’ Mike Hast mike@mpnews.com.au NEPEAN Ward councillor Tim Rodgers has criticised the state government for axing the Point Nepean quarantine station development proposed by Point Leisure Group. During a speech at the recent opening of the $250,000 renovated Sorrento Community Centre, Cr Rodgers said the government was not “doing its bit” at Point Nepean. “The refurbished Sorrento Community Centre with its large sporting hall is an asset for the whole of the Nepean Ward community – Blairgowrie, Portsea, Rye and Sorrento townships – and we may also get a new township for

the community, Nepean township at Point Nepean quarantine station, if the state government manages to sort out its own mind as to what to do with this fantastic but neglected asset,” he said. Late last week Cr Rodgers told The News the Point Leisure Group proposal “had a lot of merit”. “It would be good for the state government to tell us how it will enliven the quarantine station precinct to the same or similar extent to that proposed by Point Leisure Group,” he said. “Where will refurbishment dollars come from? “There has been 10 years of mucking around; it’s time to activate the quarantine station.” Cr Rodgers’ comments are risky as

many people in his ward were against the proposal, which was dumped by the new state government earlier this year. He said 75 buildings in the precinct needed to be brought up to “21st century standards and used rather than left empty”. None of the buildings had been occupied since about 1999 when they housed refugees from Kosovo, he said. Cr Rodgers was contacted by The News after figures were provided to the newspaper that revealed Point Leisure Group would have spent $900,000 a year on renovations and improvements at its 64-hectare lease area, a total of $95 million over the lease period, adjusted for inflation. The group would have spent

$365,000 a year on rent, reviewed after 10 years with increases based on profit. PLG had committed to spending $40 million plus $8 million on the spa complex, $20 million on a hotel and $20 million on an education centre. All of the leased area would have been available to the public, although entry fees and other charges would have applied to some areas such as the spa and hotel. Point Leisure Group would have been responsible for cleaning up a section of land that still contained unexploded ordnance from when the Australian Defence Force used Point Nepean. Cr Rodgers’ criticism followed news that the Labor state government could be liable for a compensation bill of up

to $1 million after it and Point Leisure Group failed to agree on a scaled-back project – fewer buildings, a 50-year lease with no 49-year extension, and community consultation. Labor opposed the lease prior to last year’s state election, claiming the size and impact of the project was inappropriate and not supported by the community. PLG, headed by Richard Shelmerdine and his wife Trine Nilsen, wanted to build a health and wellness retreat with hot springs, a spa, restaurant, hotel and conference centre. The group has not given up on its ambitions although it will be back to the drawing board and back into the corridors of power.

Becoming a member is quick and easy.

RECEIVE EXCLUSIVE OFFERS AND GREAT REWARDS. In the near future you will have to become a Member to receive our Meal Deals.

We can cater for various cocktail-style functions for up to 150 people in our Sand Bar, or Beer Garden.