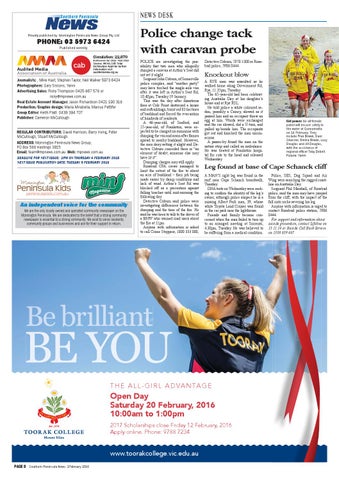 Police change tack with caravan probe POLICE are investigating the possibility that two men who allegedly dumped a caravan at Arthur’s Seat did not set it alight. Sergeant John Coburn, of Somerville police complex, said “another party” may have torched the single-axle van after it was left in Arthur’s Seat Rd, 10.40pm, Tuesday 19 January. This was the day after disastrous fires at Crib Point destroyed a house and outbuildings, burnt out 83 hectares of bushland and forced the evacuation of hundreds of residents. A 46-year-old, of Seaford, and 25-year-old, of Frankston, were expected to be charged on summons with dumping the van and arson after flames spread to nearby bushland. However, the men deny setting it alight and Detective Coburn conceded there is “an element of doubt; someone else may have lit it”. Dumping charges may still apply. Rosebud CFA crews managed to limit the extent of the fire to about an acre of bushland – their job being made easier by damp conditions and lack of wind. Arthur’s Seat Rd was blocked off as a precaution against falling braches until mid-morning the following day. Detective Coburn said police were investigating differences between the dumping and the time of the fire. He said he was keen to talk to the driver of a BMW who warned road users about the fire at 11pm. Anyone with information is asked to call Crime Stoppers, 1800 333 000,

Knockout blow A RYE man was assaulted as he walked home along Government Rd, Rye, 11.35pm, Tuesday. The 65-year-old had been celebrating Australia Day at his daughter’s house and at Rye RSL. He told police a white coloured sedan, possibly a Camry, slowed as it passed him and an occupant threw an egg at him. Words were exchanged and the car slowed, did a U-turn, and pulled up beside him. The occupants got out and knocked the man unconscious. A passer-by found the man on the nature strip and called an ambulance. He was treated at Frankston hospital for cuts to the head and released Wednesday.

Leg found at base of Cape Schanck cliff A MAN’S right leg was found in the surf near Cape Schanck boardwalk, Tuesday. DNA tests on Wednesday were seeking to confirm the identity of the leg’s owner, although police suspect he is a missing Albert Park man, 39, whose white Toyota Land Cruiser was found in the car park near the lighthouse. Friends and family became concerned when the man failed to turn up to an arranged meeting at Sorrento, 4.30pm, Tuesday. He was believed to be suffering from a medical condition.

Girl power: An all-female patrol will ensure safety in the water at Gunnamatta on 14 February. They include Fran Brown, Dani Silvester, Emma Brown, Lucy Douglas and Jill Douglas, with the assistance of regional officer Toby Dobell. Picture: Yanni

Police, SES, Dog Squad and Air Wing were searching the rugged coastline on Australia Day. Sergeant Phil Marshall, of Rosebud police, said the man may have jumped from the cliff, with the impact of the fall onto rocks severing his leg. Anyone with information is urged to contact Rosebud police station, 5986 0444. For support and information about suicide prevention, contact Lifeline on 13 11 14 or Suicide Call Back Service on 1300 659 467.