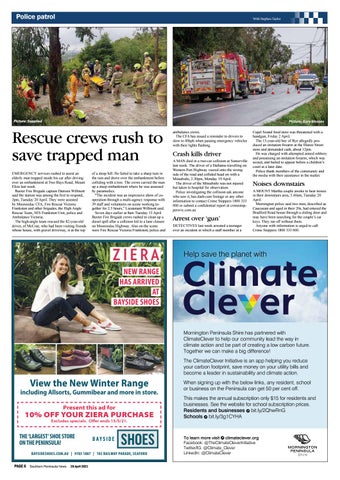 Rescue crews rush to save trapped man EMERGENCY services rushed to assist an elderly man trapped inside his car after driving over an embankment at Two Bays Road, Mount Eliza last week. Baxter Fire Brigade captain Damien Willmott said the station was among the first to respond, 3pm, Tuesday 20 April. They were assisted by Moorooduc CFA, Fire Rescue Victoria Frankston and other brigades, the High Angle Rescue Team, SES Frankston Unit, police and Ambulance Victoria. The high-angle team rescued the 82-year-old driver, of McCrae, who had been visiting friends whose house, with gravel driveway, is at the top

of a steep hill. He failed to take a sharp turn in the rain and drove over the embankment before colliding with a tree. The crews carried the man up a steep embankment where he was assessed by paramedics. “The incident was an impressive show of cooperation through a multi-agency response with 39 staff and volunteers on scene working together for 2.5 hours,” Lieutenant Willmott said. Seven days earlier at 8am Tuesday 13 April Baxter Fire Brigade crews rushed to clean up a diesel spill after a collision led to a lane closure on Moorooduc Highway. Also on the scene were Fire Rescue Victoria Frankston, police and

ambulance crews. The CFA has issued a reminder to drivers to slow to 40kph when passing emergency vehicles with their lights flashing.

Crash kills driver A MAN died in a two-car collision at Somerville last week. The driver of a Daihatsu travelling on Western Port Highway veered onto the wrong side of the road and collided head on with a Mitsubishi, 2.30pm, Monday 19 April. The driver of the Mitsubishi was not injured but taken to hospital for observation. Police investigating the collision ask anyone who saw it, has dash-cam footage or any other information to contact Crime Stoppers 1800 333 000 or submit a confidential report at crimestoppersvic.com.au

Capel Sound food store was threatened with a handgun, Friday 2 April. The 15-year-old boy of Rye allegedly produced an imitation firearm at the Illaroo Street store and demanded cash, about 12pm. He was charged with attempted armed robbery and possessing an imitation firearm, which was seized, and bailed to appear before a children’s court at a later date. Police thank members of the community and the media with their assistance in the matter.

Noises downstairs A MOUNT Martha couple awoke to hear noises in their downstairs area, 5.40am, Tuesday 20 April. Mornington police said two men, described as Caucasian and aged in their 20s, had entered the Bradford Road house through a sliding door and may have been searching for the couple’s car keys. They ran off without them. Anyone with information is urged to call Crime Stoppers 1800 333 000.

Help save the planet with

Mornington Peninsula Shire has partnered with ClimateClever to help our community lead the way in climate action and be part of creating a low carbon future. Together we can make a big difference! The ClimateClever Initiative is an app helping you reduce your carbon footprint, save money on your utility bills and become a leader in sustainability and climate action.

including Allsorts, Gummibear and more in store. Present this ad for

THE ‘LARGEST’ SHOE STORE ON THE PENINSULA!