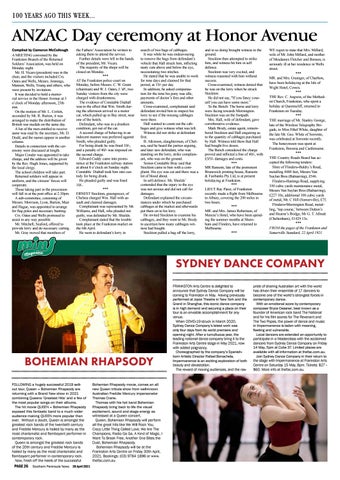 ANZAC Day ceremony at Honor Avenue Compiled by Cameron McCullough A MEETING convened by the Frankston Branch of the Returned Soldiers’ Association, was held on Monday night. Mr. H. Vicars (president) was in the chair, and the visitors included Crs. Oates and Wells, Messrs. Jennings, Manson, Wells, Young and others, who were present by invitation. It was decided to hold a memorial service in the Honor Avenue at 3 o’clock of Monday afternoon, 25th inst. On the motion of Mr. L. Corlett, seconded by Mr. R. Burton, it was arranged to make the distribution of British war medals on the same day. A list of the men entitled to receive same was read by the secretary, Mr. D. Dodd, and the names appear in another column. Details in connection with the ceremony were discussed at length. Major Conder was appointed to take charge, and the address will be given by the Rev. Hugh Jones, supported by the local clergy. The school children will take part. Returned soldiers will appear in uniform, and the citizens’ forces will cooperate. Those taking part in the procession will fall in at the post office at 2.30pm. A sub-committee, consisting of Messrs. Morrison, Lyon, Burton, Muir and Hague, was appointed to arrange for flag poles and necessary bunting. Crs. Oates and Wells promised to assist in any way possible. Mr. Mitchell, Seaford, offered to provide lorry and do necessary carting. Mr. Gray moved that members of

the Fathers’ Association be written to asking them to attend the service. Further details were left in the hands of the president, Mr. Vicars. The majority of the shops will be closed on Monday. *** AT the Frankston police court on Monday, before Messrs. C. W. Grant (chairman) and W. J. Oates, J.’sP., two Sunday visitors from the city were charged with drunkenness. The evidence of Constable Diaball was to the effect that Wm. Smith during the afternoon arrived in a motor car, which pulled up in Bay street, near one of the hotels. Defendant, who was in a drunken condition, got out of the car. A second charge of behaving in an indecent manner was preferred against Smith, who pleaded guilty. For being drunk he was fined 10/-, and a penalty of 40/- was imposed on the second charge. Edward Caddy came into prominence at the Frankston railway station at about 8 o’clock on Sunday night. Constable Diaball took him into custody for being drunk. He pleaded guilty and was fined 10/-. *** ERNEST Stockton, greengrocer, of Chelsea charged Wm. Hall with assault and claimed damages. Complainant was represented by Mr. Williams, and Hall, who pleaded not guilty, was defended by Mr. Shields. Complainant stated that the trouble took place at the Frankston market on the 6th April. He went to defendant’s lorry in

search of two bags of cabbages. It was while he was endeavouring to remove the bags from defendant’s vehicle that Hall struck him, inflicting nasty cuts above and below the eye, necessitating two stitches. He stated that he was unable to work for nine days and claimed for that period, at 15/- per day. In addition, he asked compensation for the time his pony was idle, payments of doctor’s fees and other amounts. Cross-examined, complainant said defendant invited him to inspect his lorry to see if the missing cabbages were there. Hall wanted to count out the cabbages and give witness what was left. Witness did not strike at defendant first. B. Atkinson, slaughterman, of Chelsea, said he heard the parties arguing, and later saw defendant, who was standing on the lorry, strike complainant, who was on the ground. Senior-Constable Bray said that Stockton came to him with a complaint. His eye was cut and there was a lot of blood about. In self-defence. Mr. Shields’ contended that the injury to the eye was not serious and did not call for damages. Defendant explained the circumstances under which he purchased cabbages at the market and afterwards put them on to his lorry. He invited Stockton to examine his cabbages, and they went to Mr. Brody to ascertain how many cabbages witness had bought. Stockton pulled a bag off the lorry,

and in so doing brought witness to the ground. Stockton then attempted to strike him, and witness hit him in self defence. Stockton was very excited, and witness reasoned with him without success. Cross-examined, witness denied that he was on the lorry when he struck Stockton. He did not say, “If you fancy yourself you can have some more.” To the Bench: The horse and lorry were facing towards Mornington. Stockton was on the footpath. Mrs. Hall, wife of defendant, gave corroborative evidence. Mark Brody, estate agent, remembered Stockton and Hall enquiring as to the quantity of cabbages purchased by Hall. Witness told them that Hall had bought five dozen. The Bench considered the charge proved and inflicted a fine of 40/-, with £5/5/- damages and costs. *** MR Ransom, late of the prominent Brunswick printing house, Ransom & Fairbanks Pty Ltd, is at present holidaying at Frankston. *** LIEUT Ray Parer, of Frankston recently made a flight from Melbourne to Albury, covering the 200 miles in two hours. *** MR. and Mrs. James Robertson, of Menzie’s Hotel, who have been spending the summer months at Shoreham and Flinders, have returned to Melbourne. ***

WE regret to state that Mrs. Millard, wife of Mr. John Millard, and mother of Mesdames Fletcher and Benson, is seriously ill at her residence in Wells street. *** MR. and Mrs. Grainger, of Charlton, have been holidaying at the Isle of Wight Hotel, Cowes. *** THE Rev. C. Angwin, of the Methodist Church, Frankston, who spent a holiday at Queenscliff, returned to Frankston on Tuesday. *** THE marriage of Mr. Stanley George, late of the Wireless Telegraphy Brigade, to Miss Ethel White, daughter of the late Mr. Geo. White of Sorrento, was celebrated at Sorrento recently. The honeymoon was spent at Frankston, Boronia and Castlemaine. *** THE Country Roads Board has accepted the following tenders: Shire of Flinders–Baldry’s Road, metalling 4000 feet, Messrs Van Suylan Bros (Balnarring), £546. Flinders–Hastings Road, supplying 350 cubic yards maintenance metal, Messrs Van Suylan Bros (Balnarring), £227 10s; additional 100 cubic yards of metal, Mr. C Hill (Somerville), £75. Flinders–Mornington Road, metalling, ‘top course,’ between Dutton’s and Hearne’s Bridge, Mr G. T. Allnutt (Cheltenham), £1429 13s. *** FROM the pages of the Frankston and Somerville Standard, 22 April 1921

Bohemian Rhapsody movie, comes an all new Queen tribute show from well-known Australian Freddie Mercury impersonator Thomas Crane. Thomas with his hot band Bohemian Rhapsody bring back to life the visual excitement, sound and stage energy as witnessed at a Queen concert. Queen, Bohemian Rhapsody will perform all the great hits like We Will Rock You, Crazy Little Thing Called Love, We Are The Champions, Radio Ga Ga, A Kind of Magic, I Want To Break Free, Another One Bites the Dust, Bohemian Rhapsody. Bohemian Rhapsody will be at the Frankston Arts Centre on Friday 30th April, 2021. Bookings: (03) 9784 1896 or www. thefac.com.au

FRANKSTON Arts Centre is delighted to announce that Sydney Dance Company will be coming to Frankston in May. Having previously performed at Joyce Theatre in New York and the Grand in Shanghai, this iconic dance company is in high demand and securing a place on their tour is an enviable accomplishment for any venue. When COVID-19 struck in March 2020, Sydney Dance Company’s latest work was only four days from its world premiere and opening night. After a tumultuous year, the leading national dance company bring it to the Frankston Arts Centre stage in May 2021, now with added poignancy. Choreographed by the company’s Spanishborn Artistic Director Rafael Bonachela, Impermanence is an exciting exploration of both beauty and devastation. The reward of moving audiences, and the raw

pride of sharing Australian art with the world has driven their ensemble of 17 dancers to become one of the world’s strongest forces in contemporary dance. With an emotional score by contemporary composer Bryce Dessner, best known as a founder of American rock band The National and for his film scores for The Revenant and The Two Popes, the power of dance and music in Impermanence is laden with meaning, fleeting and vulnerable. Local dancers are extended an opportunity to participate in a Masterclass with the acclaimed dancers from Sydney Dance Company on Friday 14 May, 5pm at Cube 37. Limited places are available with all information at thefac.com.au. Join Sydney Dance Company in their return to the stage with Impermanence at Frankston Arts Centre on Saturday 15 May, 8pm. Tickets: $27 $60. More info at thefac.com.au.