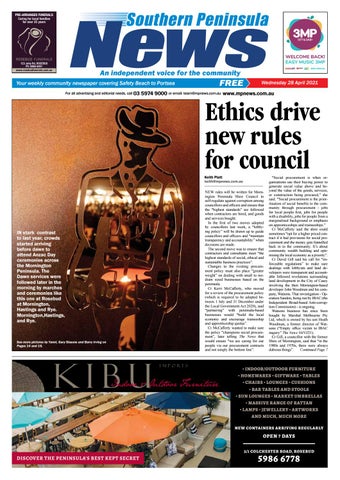 IN stark contrast to last year, crowds started arriving before dawn to attend Anzac Day ceremonies across the Mornington Peninsula. The Dawn services were followed later in the morning by marches and ceremonies like this one at Rosebud at Mornington, Hastings and Rye. Mornington,Hastings, and Rye.

See more pictures by Yanni, Gary Sissons and Barry Irving on Pages 14 and 15.

NEW rules will be written for Mornington Peninsula Shire Council to self-regulate against corruption among councillors and officers and ensure that the “highest standards” are followed when contractors are hired, and goods and services bought. In the first of two moves adopted by councillors last week, a “lobbying policy” will be drawn up to guide councillors and officers and “maintain transparency and accountability” when decisions are made. The second move was to ensure that contractors and consultants meet “the highest standards of social, ethical and sustainable business practices”. Changes to the existing procurement policy must also place “greater weight” on dealing with small to medium sized businesses based on the peninsula. Cr Kerri McCafferty, who moved for a review of the procurement policy (which is required to be adopted between 1 July and 31 December under the Local Government Act 2020), said “partnering” with peninsula-based businesses would “build the local economy and encourage traineeship and apprenticeship quotas”. Cr McCafferty wanted to make sure the policy “champions social procurement”, later telling The News that would ensure “we are caring for our people via our procurement contracts and not simply the bottom line”.

“Social procurement is when organisations use their buying power to generate social value above and beyond the value of the goods, services, or construction being procured,” she said. “Social procurement is the prioritisation of social benefits to the community through procurement - jobs for local people first, jobs for people with a disability, jobs for people from a marginalised background or emphasis on apprenticeships and traineeships.” Cr McCafferty said the shire could sometimes “opt for a higher priced contract if it had provisions for social procurement and the money gets funnelled back in to the community. It’s about community wealth building and optimising the local economy as a priority”. Cr David Gill said his call for “enforceable regulations” to make sure dealings with lobbyists and land developers were transparent and accountable followed revelations surrounding land development in the City of Casey involving the then Mornington-based developer John Woodman and his company, Watsons. That investigation - Operation Sandon, being run by IBAC (the Independent Broad-based Anti-corruption Commission) - is ongoing. Watsons business has since been bought by Marshal Melbourne Pty Ltd, which is owned by his son Heath Woodman, a former director of Watsons (“Empty office victim to IBAC inquiry” The News 16/11/21). Cr Gill, a councillor with the former Shire of Mornington, said that “in the 1980s and 1970s, there were always dubious things”. Continued Page 7