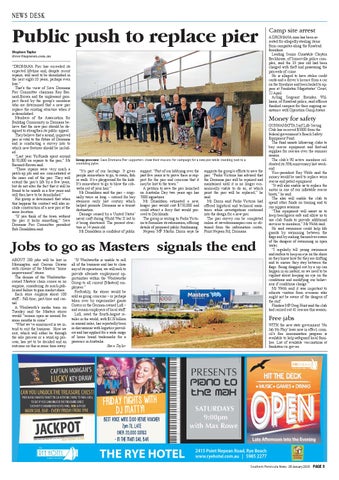 Public push to replace pier Stephen Taylor steve@mpnews.com.au “DROMANA Pier has exceeded its expected lifetime and, despite recent repairs, will need to be demolished in the next eight-10 years, perhaps even less.” That’s the view of Save Dromana Pier Committee chairman Ray Barnard-Brown and the unpleasant prospect faced by the group’s members who are determined that a new pier replace the existing structure when it is demolished. Members of the Association for Building Community in Dromana believe that the new pier should be designed to strengthen its public appeal. They believe that a sound, improved pier is vital to the future of Dromana and is conducting a survey into to which new features should be included. “Last year VicRoads spent around $170,000 on repairs to the pier,” Mr Barnard-Brown said. “These repairs were very much a patch-up job and are concentrated at the inner end of the pier. They will extend the pier’s life by a few years, but do not alter the fact that it will be found to be unsafe in a few years and will then have to be demolished.” His group is determined that when this happens the contract will also include construction of a new pier at the same location. “If you think of the town without the pier it lacks something,” Save Dromana Pier Committee president Bob Donaldson said.

A DROMANA man has been arrested for allegedly stealing items from campsites along the Rosebud foreshore. Leading Senior Constable Clayton Beckhouse, of Somerville police complex, said the 33 year old had been charged with theft and possessing the proceeds of crime. He is alleged to have stolen credit cards and a driver’s licence from a car on the foreshore and been bailed to appear at Frankston Magistrates’ Court, 22 April. Acting Sergeant Brenden Williams, of Rosebud police, said officers thanked campers for their ongoing assistance with Operation Camp Aware.

Group pressure: Save Dromana Pier supporters show their reasons for campaign for a new pier while standing next to a crumbling pylon.

“It’s part of our heritage. It gives people somewhere to go, to swim, fish or walk. It’s a playground for the kids. It’s somewhere to go to blow the cobwebs out of your hair.” Mr Donaldson said the pier – originally twice as long – catered for bay steamers early last century which helped promote Dromana as a tourist destination. Damage caused by a United States’ naval craft during World War II led to it being shortened. The present structure is 54 years old. Mr Donaldson is confident of public

support. “Part of our lobbying over the past five years is to prove there is support for the pier and concerns that it may be lost to the town.” A petition to save the pier launched on Australia Day two years ago has 7000 signatures. Mr Donaldson estimated a new, longer pier would cost $750,000 and could attract a ferry that would proceed to Docklands. The group is writing to Parks Victoria to formalise its submission, offering details of proposed public fundraising. Nepean MP Martin Dixon says he

supports the group’s efforts to save the pier. “Parks Victoria has advised that the Dromana pier will be repaired and maintained until it is no longer economically viable to do so, at which point the pier will be replaced,” he said. Mr Dixon said Parks Victoria had offered logistical and technical assistance while investigations continued into the design for a new pier. The pier survey can be completed online at savedromanapier.com or obtained from the information centre, Point Nepean Rd, Dromana.

Jobs to go as Masters signals the end ABOUT 200 jobs will be lost in Mornington and Carrum Downs with closure of the Masters “home improvement” stores. The demise of the Woolworthsowned Masters chain comes as no surprise, considering its much-publicised failure to gain market share. Each store employs about 100 staff - full-time, part-time and casual. A Woolworth’s media team on Tuesday said the Masters stores would “remain open as normal for some months to come”. “What we’ve announced is we intend to exit the business. How we exit, which will either be through the sale process or a wind-up process, has yet to be decided and an outcome on this is some time away.

“If Woolworths is unable to sell all of the business and has to close any of its operations, we will seek to provide alternate employment opportunities within the Woolworths Group to all current [Masters] employees.” Preferably, the stores would be sold as going concerns – or perhaps taken over by supermarket giants Costco or the German-owned Lidl – and remain employers of local staff. Lidl, rated the fourth-largest retailer in the world, with $128 billion in annual sales, has reportedly been in discussions with logistics providers and has applied for a wide range of home brand trademarks for a presence in Australia. Steve Taylor

GUNNAMATTA Surf Life Saving Club has received $5000 from the federal government’s Beach Safety Equipment Fund. The fund assists lifesaving clubs to buy rescue equipment and first-aid supplies for rescues over the summer season. The club’s 90 active members celebrated its 50th anniversary last weekend. Vice-president Ray Webb said the money would be used to replace worn rescue and patrol equipment. “It will also enable us to replace the motor in one of our inflatable rescue boats,” he said. The also will enable the club to spend other funds on training and to run nippers sessions. “This equipment will assist us to keep beachgoers safe and allow us to use club funds to provide additional services to members,” Mr Webb said. He said swimmers could help life guards by swimming between the flags and by making themselves aware of the dangers of swimming in open water. “I regularly tell young swimmers and surfers to keep an eye on the shore so they know how far they are drifting and to ensure they stay between the flags. Being dragged out by a rip can happen in an instant, so we need to be vigilant about keeping an eye on the conditions and modifying our behaviour if conditions change.” Mr Webb said it was important to educate visitors from overseas who might not be aware of the dangers of the surf. Flinders MP Greg Hunt said the club had carried out 41 rescues this season.