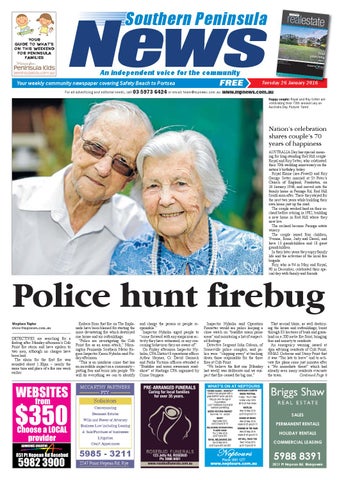 Your guide to whatâ&amp;#x20AC;&amp;#x2122;s on this weekend for peninsula families

Nationâ&amp;#x20AC;&amp;#x2122;s celebration shares coupleâ&amp;#x20AC;&amp;#x2122;s 70 years of happiness AUSTRALIA Day has special meaning for long-standing Red Hill couple Royal and Roy Setter, who celebrated their 70th wedding anniversary on the nationâ&amp;#x20AC;&amp;#x2122;s birthday, today. Royal Elaine (nee-Powell) and Roy George Setter married at St Peterâ&amp;#x20AC;&amp;#x2122;s Church of England, Frankston, on 26 January 1946, and moved into the family home in Paringa Rd, Red Hill South soon after. There they stayed for the next two years while building their own home just up the road. The couple worked hard on their orchard before retiring in 1982, building a new home in Red Hill where they now live. The orchard became Paringa estate winery. The couple raised four children, Yvonne, Ernie, Judy and Darrel, and have 13 grandchildren and 18 great grandchildren. In their later years they enjoy family life and the activities of the local fire brigade. Roy, who is 94 in May, and Royal, 90 in December, celebrated their special day with family and friends.

Police hunt firebug Stephen Taylor steve@mpnews.com.au DETECTIVES are searching for a firebug after Monday afternoonâ&amp;#x20AC;&amp;#x2122;s Crib Point fire storm and have spoken to two men, although no charges have been laid. The alarm for the first fire was sounded about 1.30pm â&amp;#x20AC;&amp;#x201C; nearly the same time and place of a fire one week earlier.

Embers from that fire on The Esplanade have been blamed for starting the more devastating fire which destroyed one house and six outbuildings. â&amp;#x20AC;&amp;#x153;Police are investigating the Crib Point fire as an arson attack,â&amp;#x20AC;? Mornington Peninsula Southern Metro Region Inspector Karen Nyholm said Friday afternoon. â&amp;#x20AC;&amp;#x153;This is an insidious crime that has an incredible impact on a community â&amp;#x20AC;&amp;#x201C; putting fear and terror into people. We will do everything we can to identify

That second blaze, as well destroying the house and outbuildings, burnt through 83 hectares of bush and grassland on a 200 metre fire front, bringing fear and anxiety to residents. An emergency warning issued at 4pm advising residents of Crib Point, HMAS Cerberus and Stony Point that it was â&amp;#x20AC;&amp;#x153;Too late to leaveâ&amp;#x20AC;? and to activate fire plans came just minutes after a â&amp;#x20AC;&amp;#x153;No immediate threatâ&amp;#x20AC;? which had already seen many residents evacuate the town. Continued Page 6