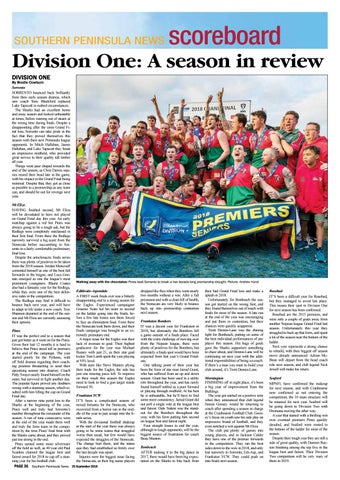 Division One: A season in review DIVISION ONE

By Brodie Cowburn Sorrento SORRENTO bounced back brilliantly from their early season dramas, which saw coach Tony Blackford replaced Luke Tapscott in rushed circumstances. The Sharks had an excellent home and away season and looked unbeatable at times, before running out of steam at the wrong time during finals. Despite a disappointing after the siren Grand Final loss, Sorrento can take pride in the fact that they proved themselves this season with their new Peninsula league opponents. In Mitch Hallahan, James Hallahan, and Luke Tapscott they boast an impressive midfield, who provided great service to their quality tall timber all year. Things went pear shaped towards the end of the season, as Chris Dawes injuries reared their head late in the game, with his impact in the Grand Final being minimal. Despite that, they got as close as possible to a premiership as any team can, and should be out for revenge next year. Mt Eliza HAVING finished second, Mt Eliza will be devastated to have not played on Grand Final day this year. An early matchup against a red hot Pines was always going to be a tough ask, but the Redlegs were completely outclassed in their first final. From there the Redlegs narrowly survived a big scare from the Stonecats before succumbing to Sorrento in a fairly comfortable preliminary final loss. Despite the anticlimactic finals series there was plenty of positives to be taken from the 2018 season. Jordan Moncrieff cemented himself as one of the best full forwards in the league, and Luca Goonan emerged as one the league’s most prominent youngsters. Blaine Coates also had a fantastic year for the Redlegs, while they were one of the best defensive sides in the competition. The Redlegs may find it difficult to bounce back next year, and will have to adapt to life under a new coach. Troy Shannon departed at the end of the season and Mt Eliza are currently assessing their options. Pines IT was the perfect end to a season that just got better as it went on for the Pines. Given their last 12 months it is hard to believe that Pines stood tall as premiers at the end of the campaign. The year started poorly for the Pythons, with off field dramas regarding their coaching position threatening to send their upcoming season into disarray. Coach Patty Swayn nearly found himself on the outer, but survived to fight another day. The popular figure proved any doubters wrong with a stunning season, which resulted with him lifting the cup on Grand Final day. After a narrow nine point loss to the Sharks at the beginning of the year, Pines well and truly had Sorrento’s number throughout the remainder of the season. A run of nine consecutive wins at the end of the year made them well and truly the form team in the competition by the time Pines’ final bout with the Sharks came about, and they proved just too strong in the end. Pines earned some more silverware off the field as well, as 40 year old Paul Scanlon claimed the league best and fairest award for 2018 to cap off a stunning year for his football club.

Edithvale-Aspendale A FIRST week finals exit was a bitterly disappointing end to a strong season for the Eagles. Experienced campaigner Graeme Yeats led his team to second on the ladder going into the finals, before a few late losses saw them forced to face an elimination final. From there the Stonecats took them down, and their finals campaign was brought to an extremely premature end. A major issue for the Eagles was their lack of avenues to goal. Their highest goalscorer for the year was Michael Bussey with just 21, as their star goal kicker Tom Lamb spent the year playing at VFL level. With stars like Steve Mannix plying their trade for the Eagles, the side has just one missing piece left. To improve on their result this season the Eagles need to look to find a gun target inside forward 50. Frankston YCW IT’S been a complicated season of mixed fortunes for the Stonecats, who recovered from a horror run in the middle of the year to just scrape into the finals series. With the divisional football shakeup at the start of the year there was always going to be some teams that struggled worse than usual, but few would have expected the struggles of the Stonecats. The change hurt them, and the status quo they had established so firmly over the last decade was upset. Injuries were the biggest issue facing the Stonecats, as their big name players 25 September 2018

dropped like flies when they went nearly two months without a win. After a full preseason and with a clean bill of health, the Stonecats are very likely to bounce back up into premiership contention next season. Frankston Bombers IT was a decent year for Frankston in 2018, but ultimately the Bombers fell a game outside of a finals place. Faced with the extra challenge of moving over from the Nepean league, there were plenty of positives for the Bombers, but ultimately a finals spot would have been expected from last year’s Grand Finalists. One talking point of their year has been the form of star man Jarrad Grant, who has suffered from an up and down season. Grant has been used in a utility role throughout the year, and has rarely found himself settled as a pure forward or playing through midfield. At his best he is unbeatable, but he’ll have to find some more consistency. Jarrad Grant did not poll a single vote at the league best and fairest. Dale Sutton was the standout for the Bombers throughout the year, with his form putting him second on league best and fairest night. Four straight losses to end the year, although to tough opponents, will be the biggest source of frustration for coach Beau Muston. Bonbeach AFTER making it to the big dance in 2017, there would have been big expectation on the Sharks to bite back from

their bad Grand Final loss and make a splash in 2018. Unfortunately for Bonbeach the season got started on the wrong foot, and they found themselves out of touch with finals for most of the season. A late run at the end of the year was encouraging and put them in contention, but their chances were quickly scuppered. Trent Dennis-Lane was the shining light for Bonbeach, putting on some of the best individual performances of any player this season. His bags of goals gave the Sharks supporters something to cheer about, and Dennis-Lane will be continuing on next year with the additional responsibilities of being co-coach. If there’s a man you want to build your club around, it’s Trent Dennis-Lane.

Rosebud IT’S been a difficult year for Rosebud, but they managed to avoid last place. This means their spot in Division One for next season has been confirmed. Rosebud are the 2015 premiers, and were only a couple of goals away from another Nepean league Grand Final last season. Unfortunately this year they struggled to back up that form, and spent a lot of the season near the bottom of the ladder. Next year represents a strong chance to rebuild, with their biggest off season move already announced. Adrian McBean will depart from the head coach role next season, and club legend Nick Jewell will make his return.

Mornington FINISHING off in eight place, it’s been a big year of improvement from the Bulldogs. The year got started on a positive note when they announced that club legend Simon Goosey would be returning to coach after spending a season in charge at the Cranbourne Football Club. Goosey’s focus on youth saw his side play an impressive brand of football, and they even notched a win against Mt Eliza. The club put plenty of games into young players, and in Jackson Calder they have one of the premier forwards in the competition. They ran the best sides down to the wire in 2018, and only lost narrowly to Sorrento, Edi-Asp, and Frankston YCW. They could push on into finals next season.

Seaford MPNFL have confirmed the makeup for next season, and with Cranbourne now confirmed as not entering the competition, the 10 team structure will be retained for next year. Seaford will be going down to Division Two with Dromana moving the other way. A year that started with a thrilling win over eventual premiers Pines quickly derailed, and Seaford were rooted to the bottom of the ladder for most of the season. Despite their tough year they are still a side of great quality, with Damien Rayson finishing among the top five in the league best and fairest. Their Division Two competition will be very wary of them in 2019.