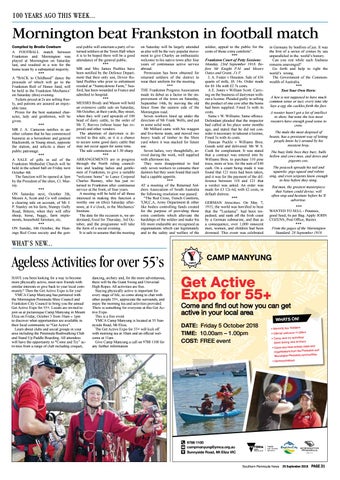 Mornington beat Frankston in football match Compiled by Brodie Cowburn A FOOTBALL match between Frankston and Mornington was played at Mornington on Saturday last, and resulted in a win for the home team by a substantial majority. *** A “BACK to Childhood” dance the proceeds of which will go to the Frankston Roll of Honor fund, will be held in the Frankston Mechanics’ on Saturday (this) evening. Tickets priced at 2s are selling freely, and patrons are assured an enjoyable time. Prizes for the best sustained character, lady and gentlemen, will be given. *** MR J. A. Cameron notifies in another column that he has commenced business as a horseshoer and general blacksmith, in Young street, opposite the station, and solicits a share of public patronage. *** A SALE of gifts in aid of the Frankston Methodist Church will be held in the school ball on Friday next October 4th The function will be opened at 3pm by the President of the shire, Cr. Murray. *** ON Saturday next, October 5th, Messrs A, Scott and Co will conduct a clearing sale on account, of Mr J. P. Stanley on his farm, Stumpy Gully Road, Bittern, when they will offer sheep, horse, buggy, farm implements, household furniture, etc. *** ON Sunday, 6th October, the Hastings Red Cross society and the gen-

eral public will entertain a party of returned soldiers at the Town Hall when it is to be hoped there will be a good attendance of the general public. *** MR and Mrs James Peebles have been notified by the Defence Department that their only son, Driver Roland Peebles who prior to enlistment resided at “Sunnydowns Farm,” Seaford, has been wounded in France and admitted to hospital. *** MESSRS Brody and Mason will hold an extensive cattle sale on Saturday, 5th October, at their yards, Bay street, when they will yard upwards of 100 head of dairy cattle, to the order of Mr T, Reeves (whose lease has expired) and other vendors. The attention of dairymen is directed to this sale, as it is a chance to secure some good dairy cattle that may not occur again for some time. The sale commences at 1.30 sharp. *** ARRANGEMENTS are in progress through the North riding councillors and leading ladies and gentlemen of Frankston, to give a suitable “welcome home” to Lance Corporal Charles Bunney, who has just returned to Frankston after continuous service at the front, of four years. A meeting will be held of all those interesed in making this function a worthy one on (this) Saturday afternoon, at 4 o’clock, in the Mechanics’ Institute. The date for the occasion is, we understand, fixed for Thursday, 3rd October, and the programme will take the form of a social evening. It is safe to assume that the meeting

on Saturday will be largely attended as also will be the very popular movement to give Charley an enthusiastic welcome to his native town after four years of continuous active service abroad. Permission has been obtained for returned soldiers of the district to wear their uniform for the meeting. *** THE Frankston Progress Association made its debut as a factor in the improvement of the town on Saturday, September 14th, by moving the old fence from the eastern side of the Mornington road. Seven workers lined up under the direction of Mr Frank Wells, and put in some solid work. Mr Millard came with his waggon and five-horse team, and moved two heavy loads of timber to the Shire yard where it was stacked for future use. Seven ladies, very thoughtfully, arrived during the work, well supplied with afternoon tea. They were disappointed to find only seven workers to consume their dainties but they soon found that each had a capable appetite. *** AT a meeting of the Returned Soldiers Association of South Australia the following resolution war passed: “The Red Cross, Trench Comforts, Y,M,C,A, Army Department &amp; other like bodies controlling funds created for the purpose of providing those extra comforts which alleviate the hardships of the soldier and make his life more endurable are recognised as organisations which can legitimately and to the safety and welfare of the

in Germany by bonfires of joy. It was the first of a series of crimes by sea unparalleled in the. world’s history. Can you rest while such foulness remains unavenged? Go forth and help to right the world’s wrong. The Government of the Commonwealth of Australia. *** Toot Your Own Horn: A hen is not supposed to have much common sense or tact, every time she lays a egg she cackles forth the fact. A rooster hasn’t got a lot of intellect to show, but none the less most roosters have enough good sense to crow. The mule the most despised of beasts, has a presistent way of letting people know he’s around by his insistent bray. The busy little bees they buzz, bulls bellow and cows moo, and doves and pigeons coo. The peacock spreads his tail and squawks; pigs squeal and robins sing, and even serpents know enough to hiss before they sting. But man, the greatest masterpiece that Nature could devise, will often stop and hesitate before he’ll advertise. *** WANTED TO SELL - Potatoes, good Seed, 6s per Bag. Apply JOHN COZENS, Post Office, Baxter. *** From the pages of the Mornington Standard, 28 September 1918

Ageless Activities for over 55’s HAVE you been looking for a way to become more physically active, meet new friends with similar interests or give back to your local community? Then the Get Active Expo is for you! YMCA Camp Manyung has partnered with the Mornington Peninsula Shire Council and Frankston City Council to bring you the annual Get Active Expo for 55+. Locals are invited to join us at picturesque Camp Manyung in Mount Eliza on Friday, October 5 from 10am – 1pm to discover what opportunities are available in their local community to “Get Active”. Learn about clubs and social groups in your area including the Peninsula Bushwalking Club and Stand Up Paddle Boarding. All attendees will have the opportunity to “Come and Try” activities from a range of club including croquet,

soldier, appeal to the public for the costs of those extra comforts”. *** Frankston Court of Petty Sessions: Monday, 23rd September 1918. Before Mr Knight P.M. and Messrs Oates and Grant, J’s P. J. A. Foster v Houston. Sale of 456 quarts of milk, £6 14s. Order made for £6 18s with £2 7s costs. A E. Jones v William Scott. Carrying on the business of dairyman without a license. Pleaded guilty to selling the product of one cow after the home had been supplied. Fined 5s with 4s costs. Same v W. Williams. Same offence. Defendant pleaded that the inspector had called at his place some months ago, and stated that he did not consider it necessary to takeout a license, Fined 5s with 4s costs. Duncan Puckle v Williams Bros. Goods sold and delivered. Mr W S. Cook for complainant. It was stated that a contract was entered into by Williams Bros. to purchase 110 pine trees, more or less. for the sum of £40 cash. On a count being made it was found that 121 trees had been taken, and it was for the payment of the difference between 110 and 121 that a verdict was asked. An order was made for £3 12s 6d, with £2 costs, in default distress. *** GERMAN Atrocities. On May 7, 1915, the world was horrified to hear that the “Lusitania”. had been torpedoed, and sunk off the Irish coast by a German submarine, and that as a consequence, over 1,000 innocent men, women, and children had been drowned. This event was celebrated

dancing, archery and, for the more adventurous, there will be the Giant Swing and Universal High Ropes. All activities are free. Staying physically active is important for every stage of life, so come along to chat with other people 55+, appreciate the surrounds, and enjoy the morning tea and activities provided. There is something for everyone at this Get Active Expo. This is a free event YMCA Camp Manyung is located at 35 Sunnyside Road, Mt Eliza. The Get Active Expo for 55+ will kick off with morning tea at 10am and an official welcome at 11am. Give Camp Manyung a call on 9788 1100 for any further information