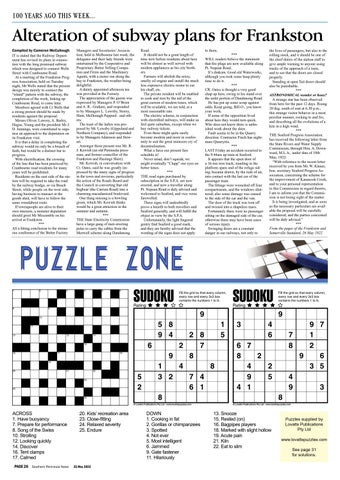 Alteration of subway plans for Frankston Compiled by Cameron McCullough IT is stated that the Railway Department has revised its plans in connection with the long promised subway which was designed to connect Wells Street with Cranbourne Road. At a meeting of the Frankston Progress Association, held on Tuesday night, Mr Wells stated that the present design was merely to connect the “island” pattern with the subway, the completion of the work, linking up Cranbourne Road, to come later. Members agreed with Cr Wells that a strong protest should be made by residents against the proposal. Messrs Oliver, Lawrey, A. Bailey, Hague, Young and the president Mr J. D. Jennings, were constituted to organise an approach to the deputation on its Frankston visit. It is that a delay in completing the subway would no only be a breach of faith, but would be a distinct bar to progress. With electrification, the crossing of the line that has been practiced by Cranbourne road residents for many years will be prohibited. Residents on the east side of the station will be required to take the road by the railway bridge, or via Beach Street, while people on the west side, having business to transact at the goods shed, will have to follow the same roundabout route. If townspeople are alive to their own interests, a monster deputation should greet Mr Miscamble on his arrival at Frankston. *** AS a fitting conclusion to the strenuous conference of the Butter Factory

Managers and Secretaries’ Association; held in Melbourne last week, the delegates and their lady friends were entertained by the Cooperative and Proprietary Butter Selling Companies and Firms and the Machinery Agents, with a motor run along the bay to Frankston, the weather being delightful. A dainty appointed afternoon tea was provided at the Fernery. The appreciation of the guests was expressed by Managers P. O’Brien and A. R.. Graham, and responded to by Managers L. Lowsby, Storey, Hunt, McDonagh Peppard . and others. The toast of the ladies was proposed by Mr. Lowsby (Gippsland and Northern Company), and responded to by Managers Adamson and Stewart. Amongst those present was Mr. R. J. Kewish (an old Peninsula pressman, and former councillor of the Frankston and Hastings Shire). Mr. Kewish, in conversation with Cr. Oates, said he was greatly impressed by the many signs of progress in the town and environs, particularly the action of the Roads Board and the Council in converting that old bugbear (the Carrum Road) into a charming macadamised boulevard. One thing missing is a bowling green, which Mr. Kewish thinks would be a great attraction in the summer and autumn. *** THE State Electricity Commission have a large gang of men erecting poles to carry the cables from the Morwell scheme along Dandenong

Road. It should not be a great length of time now before residents about here will be almost as well served with modern appliances as his city brothers. Farmers will abolish the noisy, smelly oil engine and install the much less expensive electric motor to cut his chaff, etc. The private resident will be enabled to cook and iron by the aid of the great current of modern times, which will be available, we are told, at a most reasonable rate. The electric scheme, in conjunction with electrified railways, will make us feel quite suburban, except when we buy railway tickets. Even these might quite easily become modern and more in conformity to suit the great insincere cry of decentralisation. What a farce our present fare schedule is! Never mind, don’t squeak; we might eventually “Clapp” our eyes on better times. *** THE road signs purchased by subscription in the S.P.A. are now erected, and now a traveller along Pt. Nepean Road is duly advised and welcomed to Seaford, and vice versa farewelled. These signs will undoubtedly prove a benefit to both travellers and Seaford generally, and will fulfill the object in view by the S.P.A. Unfortunately, the light fingered gentry find Seaford a good mark, and they are hereby advised that the wording of the signs does not apply

*** WILL readers believe the statement that fire plugs are now available along Pt. Nepean Road. It’s dinkum. Good old Waterworks, although you took some heap plenty time to do it. *** CR. Oates is thought a very good chap up here, owing to his stand over the unlet portion of Dandenong Road. He has put up some scrap against odds. Keep going, Bill-O., you know your work. If some of the opposition lived about here they would turn quick. Who does not know there is unfinished work about the shire. Fault seems to be in the Quarry direction. Contractor Finch has nightmare Quarryitis. *** LAST Friday an accident occurred to the 9.44am up train at Seaford. It appears that the open door of a 16-ton iron truck, standing in the platform spare end of the refuge siding, became drawn, by the rush of air, into contact with the last car of the passenger train. The fittings were wrenched off four compartments, and the windows shattered; also some damage was caused to the side of the car and the van. The door of the truck was torn off and twisted into a shapeless mass. Fortunately there were no passenger sitting on the damaged side of the car, otherwise there may have been cases of serious injury. Swinging doors are a constant danger in our railways, not only to

the lives of passengers, but also to the rolling stock, and it should be one of the chief duties of the station staff to give ample warning to anyone using trucks of the approach of a train, and to see that the doors are closed properly. Standing at open Tait doors should also be punishable. *** ASTRONOMICAL wonder or hoax? A strange star has been observed from here for the past 12 days. Rising 20 deg. south of east at 6.30 p.m., this strange visitor behaves in a most peculiar manner, rocking to and fro, and describing all the evolutions of a kite in a high wind. *** THE Seaford Progress Association has received the following letter from the State Rivers and Water Supply Commission, through Hon. A. Downward, M.L.A., under date of 18th May, 1922: “With reference to the recent letter received by you from Mr. W. Klauer, hon. secretary Seaford Progress Association, concerning the scheme for the improvement of Kananook Creek, and to your personal representation to this Commission in regard thereto, I am to inform you that the Commission is not losing sight of the matter. It is being investigated, and as soon as the necessary particulars are available the proposal will be carefully considered, and the parties concerned will be duly advised.” *** From the pages of the Frankston and Somerville Standard, 26 May 1922

DOWN 1. Cooking in fat 2. Gorillas or chimpanzees 3. Spotted 4. Not ever 5. Most intelligent 6. Jammed 9. Gate fastener 11. Hilariously