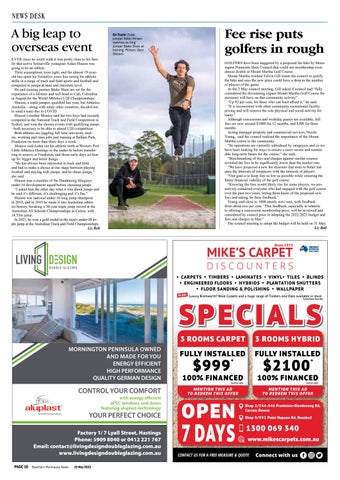 A big leap to overseas event

EVER since he could walk it was pretty clear to his family that active Somerville youngster Aiden Hinson was going to be an athlete. Their assumptions were right, and the almost 19-yearold has spent his formative years fine tuning his athletic skills in a range of track and field sports and football and competed in jumps at state and interstate level. He and training partner Blake Shaw are set for the experience of a lifetime and will head to Cali, Colombia in August for the World Athletics U20 Championships. Hinson, a triple jumper, qualified last year, but Athletics Australia – along with many other countries, decided not to send a team due to COVID. Hinson’s mother Monica said the two boys had recently competed in the National Track and Field Competition in Sydney and won the chosen events with qualifying jumps - both necessary to be able to attend U20 competition. Both athletes are juggling full time university studies, working part time jobs and training at Ballam Park, Frankston on more than three days a week. Monica said Aiden cut his athletic teeth at Western Port Little Athletics Hastings in the under-6s before transferring to seniors at Frankston, and those early days set him up for bigger and better things. “He has always been interested in track and field, and had to make a choice at one stage between playing football and staying with jumps, and he chose jumps,” she said. Hinson was a member of the Dandenong Stingrays under-16 development squad before choosing jumps. “I asked him the other day what it was about jumps and he said it’s different, it’s challenging and it’s fun.” Hinson was national under-16 long jump champion in 2018, and in 2019 he made it into Australian athletics history, breaking a 30-year triple jump record at the Australian All Schools Championships in Cairns, with 14.55m jump. In 2021, he won a gold medal in the men&#39;s under-20 triple jump at the Australian Track and Field Championships. Liz Bell

Fee rise puts golfers in rough GOLFERS have been staggered by a proposed fee hike by Mornington Peninsula Shire Council that could see membership costs almost double at Mount Martha Golf Course. Mount Martha resident Edwin Gill wants the council to justify the hike and says the new price could force a drop in the number of players of the game. At the 3 May council meeting, Gill asked if council had “fully considered the devastating impact Mount Martha Golf Course fee increases will have on that community activity”. “Up 92 per cent, for those who can least afford it,” he said. “It is inconsistent with other community recreational facility pricing and will remove the sole physical and social activity for many.” Although concessions and weekday passes are available, full fees are now around $1000 for 12 months, and $300 for three months. Acting manager property and commercial services, Nicole Young, said the council realised the importance of the Mount Martha course to the community. “Its operations are currently subsidised by ratepayers and so we have been looking for ways to ensure a more secure and sustainable long-term future for the course,” she said,. “Benchmarking of fees and charges against similar courses revealed the fees to be significantly lower than the market rate. “We have proposed a new fee structure that aims to better balance the interests of ratepayers with the interests of players. “Our goal is to keep fees as low as possible while ensuring the future financial viability of the golf course. “Knowing the fees would likely rise for some players, we proactively contacted everyone who had engaged with the golf course over the past two years, letting them know of the proposed new fees and asking for their feedback.” Young said close to 1800 emails were sent, with feedback from about two per cent. “This feedback, especially in relation to offering a concession membership price, will be reviewed and considered by council prior to adopting the 2022/2023 budget and fees and charges in May.“ The council meeting to adopt the budget will be held on 31 May. Liz Bell