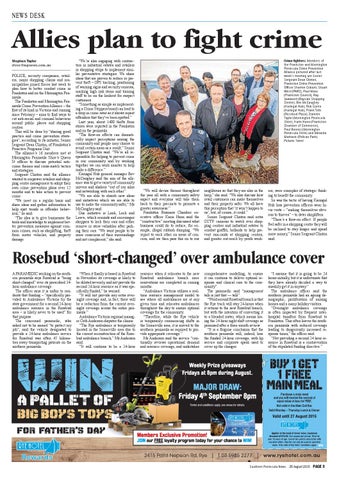 Allies plan to fight crime Stephen Taylor steve@mpnews.com.au POLICE, security companies, retailers, major shopping chains and municipalities joined forces last week to plan how to better combat crime in Frankston and on the Mornington Peninsula. The Frankston and Mornington Peninsula Crime Prevention Alliance – the first of its kind in Victoria and running since February – aims to find ways to cut anti-social and criminal behaviour around public places and shopping centres. This will be done by “sharing good practice and crime prevention strategies”, according to its initiator, Senior Sergeant Dean Clinton, of Frankston’s Proactive Programs Unit. The alliance’s 16 members met at Mornington Peninsula Shire’s Queen St offices to discuss potential anticrime themes and cross-match tactics and strategies. Sergeant Clinton said the alliance wanted to empower retailers and shopping centre managemers to adopt their own crime prevention plans over 12 months and to take action to prevent crime. “We meet on a regular basis and share ideas and gather information to help spot trends in offender behaviour,” he said. “The idea is to give businesses the tools and knowledge to implement better prevention measures against common crimes, such as shoplifting, theft from motor vehicles, and property damage.

“We’re also engaging with contractors in industrial estates and retailers in shopping strips to implement similar preventative strategies. We share ideas that are proven to reduce or prevent theft – GPS tracking, positioning of warning signs and security cameras, marking high risk items and training staff to be on the lookout for suspect customers. “Something as simple as implementing a Crime Stoppers board can lead to a drop in crime rates as it shows repeat offenders that they’ve been spotted.” Last year, about 1400 thefts from stores were reported in the Frankston and on the peninsula. “The flow-on effects can dramatically impact perceptions among the community and people may choose to avoid certain areas as a result,” Senior Sergeant Clinton said. “We’re all responsible for helping to prevent crime in our community and by working together we can work smarter to help make a difference.” Karingal Hub general manager Bev McCaughey said the aim of the alliance was to get a variety of community movers and shakers “out of our silos and networking with each other”. “We are able to absorb new ideas and initiatives which we are able to use to make the community safer,” Ms McCaughey said. One initiative is Look, Lock and Leave, which reminds and encourages shoppers to lock their cars and either remove or stow valuables after parking their cars. “We want people to be more conscious of their surroundings and not complacent,” she said.

“We will devise themes throughout the year all with a community safety aspect and everyone will take them back to their precincts to promote a greater awareness.” Frankston Business Chamber executive officer Karin Hann said the “constructive” meeting discussed what business could do to reduce, for example, illegal rubbish dumping. “We report to each other on areas of concern, and we then pass this on to our

neighbours so that they are also in the loop,” she said. “We also discuss how retail customers can make themselves and their property safer. We all have this perception that ‘it won’t happen to us’, but, of course, it could.” Senior Sergeant Clinton said extra CCTV cameras to watch over shopping centres and industrial estates to combat graffiti, bollards to help prevent ram-raids at shopping centres, and greater out-reach by youth work-

ers, were examples of strategic thinking to benefit the community. So was the tactic of having Karingal Hub loss prevention officers wear hivis vests – “making themselves obvious to thieves” – to deter shoplifters. “There’s a flow-on effect: If people feel safer in a shopping centre they will be inclined to stay longer and spend more money,” Senior Sergeant Clinton said.

Rosebud ‘short-changed’ over ambulance cover A PARAMEDIC working on the southern peninsula says Rosebud is “being short-changed” over its prescribed 24hour ambulance coverage. The officer says it is unfair to residents that funding – “specifically provided to Ambulance Victoria by the state government for a second 24-hour ambulance resource in the Rosebud area – is likely never to be used” for that purpose. The concerned paramedic, who asked not to be named “to protect my job”, said the vehicle designated to provide a 24-hour ambulance service for Rosebud was often 45 kilometres away transporting patients on the northern peninsula.

“When it finally is based in Rosebud in November its coverage is likely to be diluted severely, and not provide the second 24-hour resource as it was specifically funded,” he warned. “It will not provide any extra overnight coverage and, in fact, there will be a reduction from the current overnight coverage across the entire peninsula.” Ambulance Victoria regional manager Cath Anderson disputes the claims. “The Rye ambulance is temporarily located in the Somerville area due to the current reconstruction of the Rosebud ambulance branch,” Ms Anderson said. “It will continue to be a 24-hour

resource when it relocates to the new Rosebud ambulance branch once renovations are completed in coming months. “Ambulance Victoria utilises a realtime resource management model to see where all ambulances are at any given time and relocates ambulances throughout the day to ensure optimal coverage for the community. “Therefore, while the Rye vehicle is temporarily commencing shifts in the Somerville area, it is moved to the southern peninsula as required to provide appropriate coverage.” Ms Anderson said the service “continually reviews operational demand and resource coverage, and undertakes

comprehensive modelling, to ensure it can continue to deliver optimal response and clinical care to the community”. The paramedic said “management talk is just that — talk”. “Word around Rosebud branch is that the Rye truck will stay 24-hours when it returns to the new Rosebud branch, but with the intention of converting it to a blended roster, which means losing the 24-hour night shift coverage as promised after a three-month review. “It is a forgone conclusion that the southern peninsula will, indeed, lose the funded 24-hour coverage, with lip service and corporate speak used to cover up the changes.

“I assume that it is going to be 24 hours initially, but it is unfortunate that they have already decided a way to sneakily get it in anyway.” The ambulance officer said the southern peninsula had an ageing demographic, proliferation of nursing homes and a many holiday visitors. “Overnight ambulance coverage is often impacted by frequent interhospital transfers from Rosebud to Frankston. This often leaves the southern peninsula with reduced coverage leading to dangerously increased response times,” the officer said. “Not providing a second 24 hour resource in Rosebud is a contravention of the stipulated funding directive.”