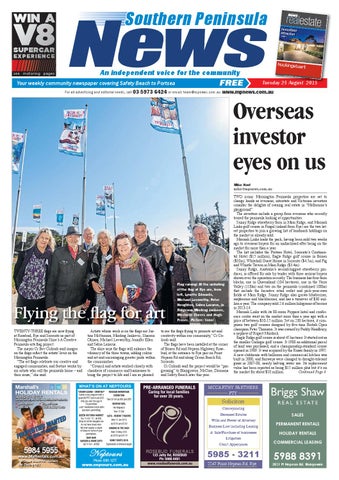 Marshallâ&amp;#x20AC;&amp;#x2122;s HOLIDAY RENTALS SORRENTO OFFICE We are the largest on the Mornington Peninsula

Artists whose work is on the flags are Justine McNamara, Miodrag Jankovic, Sharron Okines, Michael Leeworthy, Jennifer Ellen and Sabra Lazarus. The shire says the flags will enhance the vibrancy of the three towns, adding colour and art and encouraging greater pride within the communities. â&amp;#x20AC;&amp;#x153;Council and artists worked closely with chambers of commerce and businesses to bring the project to life and I am so pleased

to see the flags flying to promote art and creativity within our community,â&amp;#x20AC;? Cr Colomb said. The flags have been installed at the corner of Boneo Rd and Nepean Highway, Rosebud, at the entrance to Rye pier on Point Nepean Rd and along Ocean Beach Rd, Sorrento. Cr Colomb said the project would be â&amp;#x20AC;&amp;#x153;progressingâ&amp;#x20AC;? to Blairgowrie, McCrae, Dromana and Safety Beach later this year.

TWO iconic Mornington Peninsula properties are set to change hands as overseas, interstate and Victorian investors consider the delights of owning real estate in â&amp;#x20AC;&amp;#x153;Melbourneâ&amp;#x20AC;&amp;#x2122;s playgroundâ&amp;#x20AC;?. The investors include a group from overseas who recently toured the peninsula looking at opportunities. Sunny Ridge strawberry farm in Main Ridge, and Moonah Links golf course in Fingal (inland from Rye) are the two latest properties to join a growing list of landmark holdings on the market or already sold. Moonah Links leads the pack, having been sold two weeks ago to overseas buyers for an undisclosed after being on the market for more than a year. The list includes the Portsea Hotel, Sorrentoâ&amp;#x20AC;&amp;#x2122;s Continental Hotel ($15 million), Eagle Ridge golf course in Boneo ($10m), Whitehall Guest House in Sorrento ($4.5m), and Pig and Whistle Tavern in Main Ridge ($3.4m). Sunny Ridge, Australiaâ&amp;#x20AC;&amp;#x2122;s second-biggest strawberry producer, is offered for sale by tender with three serious buyers shown over the operation recently. The business has four farm blocks, one in Queensland (104 hectares), one in the Yarra Valley (118ha) and two on the peninsula (combined 108ha) that include the lucrative retail outlet and pick-your-own fields at Main Ridge. Sunny Ridge also grows blueberries, raspberries and blackberries, and has a turnover of $30 million a year. The company sold 2.6 million kilograms of berries in 2013-14. Moonah Links with its 88-room Peppers hotel and conference centre went on the market more than a year ago with a price of between $10-15 million. Set on 238 hectares, it comprises two golf courses designed by five-time British Open champion Peter Thomson. It was owned by Paddy Handbury, a nephew of Rupert Murdoch. Eagle Ridge golf course is about 45 hectares. It started out as the smaller Carlogie golf course. It 1988 an additional parcel of land was purchased, and a championship-standard course opened in 1989. It was acquired by the Russo family in 1995. A new clubhouse with ballroom and commercial kitchen was built in 2000, and fairways were changed to drought-tolerant grass in 2007-08, nearly halving water use. Its replacement value has been reported as being $15 million plus but itâ&amp;#x20AC;&amp;#x2122;s on the market for about $10 million. Continued Page 4