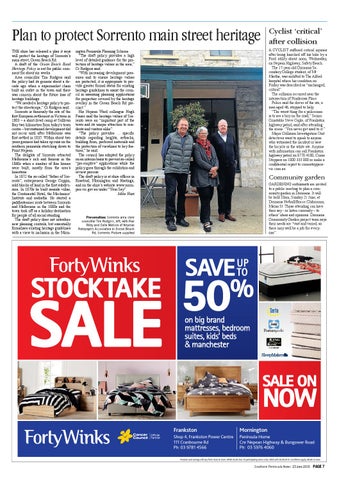 Plan to protect Sorrento main street heritage THE shire has released a plan it says will protect the heritage of Sorrento’s main street, Ocean Beach Rd. A draft of the Ocean Beach Road Heritage Policy is out for public comment for about six weeks. Area councillor Tim Rodgers said the policy had its genesis about a decade ago when a supermarket chain built an outlet in the town and there was concern about the future loss of heritage buildings. “We needed a heritage policy to protect the streetscape,” Cr Rodgers said. Sorrento is famously the site of the first European settlement in Victoria in 1803 – a short-lived camp at Sullivan Bay two kilometres from today’s town centre – but sustained development did not occur until after Melbourne was first settled in 1835. Within about two years graziers had taken up runs on the southern peninsula stretching down to Point Nepean. The delights of Sorrento attracted Melbourne’s rich and famous in the 1860s when a number of fine homes were built, mostly from the area’s limestone. In 1872 the so-called “father of Sorrento”, entrepreneur George Coppin, sold blocks of land in the first subdivision. In 1870s he built seaside villas, the Continental Hotel, the Mechanics’ Institute and seabaths. He started a paddlesteamer route between Sorrento and Melbourne in the 1880s and the town took off as a holiday destination for people of all social standing. The draft policy does not introduce new planning controls, but essentially formalises existing heritage guidelines with a view to inclusion in the Morn-

Cyclist ‘critical’ after collision A CYCLIST suffered critical injuries after being knocked off his bike by a Ford utility about noon, Wednesday, on Nepean Highway, Safety Beach. The 17-year-old Dromana Secondary College student, of Mt Martha, was airlifted to The Alfred hospital where his condition on Friday was described as “unchanged, critical”. The collision occurred near the intersection of Ponderosa Place. Police said the driver of the ute, a man aged 46, stopped to help. “The worst thing for a policeman is to see a boy on the road,” Senior Constable Steve Caple, of Frankston highway patrol, said after attending the scene. “You never get used to it.” Major Collision Investigation Unit detectives want to speak to anyone who witnessed the incident or saw the bicycle or the white ute. Anyone with information can call Frankston highway patrol on 8770 4100, Crime Stoppers on 1800 333 000 or make a confidential report to crimestoppersvic.com.au

ington Peninsula Planning Scheme. “The draft policy provides a high level of detailed guidance for the protection of heritage values in the area,” Cr Rodgers said. “With increasing development pressures and to ensure heritage values are protected, it is appropriate to provide greater formal status for existing heritage guidelines to assist the council in assessing planning applications for properties covered by the heritage overlay in the Ocean Beach Rd precinct.” His Nepean Ward colleague Hugh Fraser said the heritage values of Sorrento were an “important part of the town and its unique attraction to residents and visitors alike”. “The policy provides ... specific details regarding heights, setbacks, building form, preferred materials and the protection of viewlines to key features,” he said. The council has adopted the policy on an interim basis to prevent so-called “pre-emptive” applications while the policy goes through the exhibition and review process. The draft policy is at shire offices in Rosebud, Mornington and Hastings, and on the shire’s website www.mornpen.vic.gov.au under “Your Say”. Mike Hast

Community garden GARDENING enthusiasts are invited to a public meeting to plan a community garden in Dromana. It will be held 10am, Sunday 21 June, at Dromana Netball/Bocce Clubrooms, Marna St. Those attending can have their say - or listen curiously – to others’ ideas and opinions. Dromana Community Garden project team says their needs are “vast and varied, so there may well be a job for everyone”.

Products and Savings will vary from store to store. While stocks last. At participating stores only. Valid until 28.06.2015. Conditions apply, details in store.