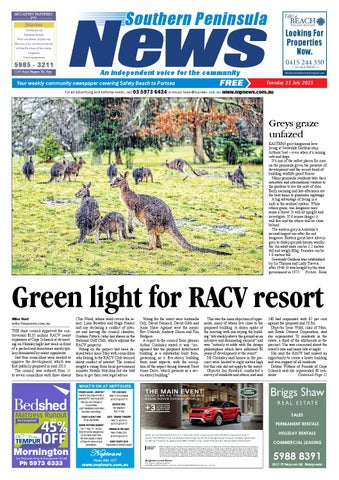 Greys graze unfazed EASTERN grey kangaroos love living at Seawinds Gardens atop Arthurs Seat – even when it’s raining cats and dogs. It’s one of the safest places for roos on the peninsula given the pressure of development and the recent trend of building wildlife-proof fences. Many peninsula residents take their interstate and international visitors to the gardens to see the mob of roos. Early morning and late afternoon are the best times to guarantee sightings. A big advantage of living in a mob is the sentinel system. While others graze, one kangaroo may sense a threat. It will sit upright and investigate. If it senses danger it will flee and the others will be close behind. The eastern grey is Australia’s second-largest roo after the red kangaroo. Eastern greys have silverygrey to dusky greyish-brown woolly fur. An adult male can be 2.2 metres tall and weigh 60kg. Females can be 1.8 metres tall. Seawinds Gardens was established by Sir Thomas and Lady Travers after 1946. It was bought by the state government in 1975. Picture: Yanni

Green light for RACV resort Mike Hast mike@mpnews.com.au THE shire council approved the controversial $135 million RACV resort expansion at Cape Schanck at its meeting on Monday night last week in front of a packed and sometimes unruly gallery dominated by resort opponents. Just four councillors were needed to approve the development, which was first publicly proposed in mid-2013. The council was reduced from 11 to seven councillors with three absent

(Tim Wood, whose ward covers the resort, Lynn Bowden and Hugh Fraser) and one declaring a conflict of interest and leaving the council chamber, Graham Pittock (who has shares in the National Golf Club, which adjoins the RACV property). Voting on the project had been delayed twice since May with councillors who belong to the RACV Club worried about conflict of interest. The council sought a ruling from local government minister Natalie Hutchins but she told them to get their own legal advice.

Voting for the resort were Antonella Celi, David Garnock, David Gibb and Anne Shaw. Against were the mayor Bev Colomb, Andrew Dixon and Tim Rodgers. A report to the council from planner Arthur Cooksley stated it was “recognised that the proposed hotel/resort building is a substantial built form, presenting as a five-storey building from most aspects, with the exception of the aspect facing towards Trent Jones Drive, which presents as a seven-storey building”.

This was the main objection of opponents, many of whom live close to the proposed building. A dozen spoke at the meeting with one saying the building “sits starkly above the ground as an intrusive and dominating element” and was “entirely at odds with the design philosophies which have informed 30 years of development at the resort”. Mr Cooksley said homes in the precinct were limited to eight metres high but this rule did not apply to the resort. Objector Ian Renwick conducted a survey of residents and others, and said

240 had responded with 82 per cent against the proposal and 18 for. Objector Irene Wyld, chair of Moonah Estate Owners Corporation, said she represented 70 residents in the estate, a third of the allotments in the precinct. She was concerned about the resort’s size and noise late at night. She said the RACV had missed an opportunity to create a lower building and win support of all residents. Debbie Withers of Friends of Cape Schanck said she represented 40 residents. Continued Page 12

*CROWN CASINO – MONTHLY* Casino’s bus program with a great BUFFET lunch (all) $35. Only p/p over the age of 18 permitted. LAST THURSDAY EACH MTH (numbers permitting)

QUEEN VICTORIA MARKET Tue 11 Aug ’15 - all $30. Shop for all the bargains we do not have down here. We even supply a couple of Eskys for some of your perishables.