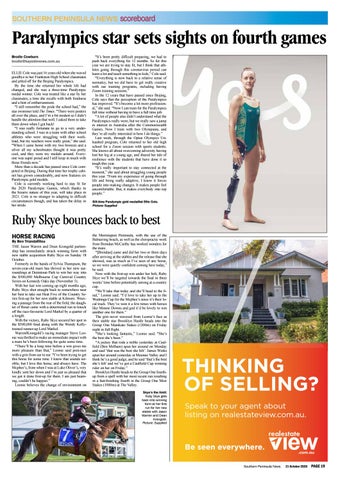 Paralympics star sets sights on fourth games Brodie Cowburn brodie@baysidenews.com.au ELLIE Cole was just 16 years old when she waved goodbye to her Frankston High School classmates and jetted off for the Beijing Paralympics. By the time she returned her whole life had changed, and she was a three-time Paralympic medal winner. Cole was treated like a star by her classmates, a time she recalls with both fondness and a hint of embarrassment. “I still remember the pride the school had,” the star swimmer told The Times. “There were posters all over the place, and I’m a bit modest so I didn’t handle the attention that well. I asked them to take them down when I got back! “I was really fortunate to go to a very understanding school. I was in a team with other school athletes who were struggling with their workload, but my teachers were really great,” she said. “When I came home with my two bronzes and a silver all my schoolmates thought it was pretty cool, and they wore my medals around. Everyone was super proud and I still keep in touch with those friends now.” More than a decade has passed since Cole competed in Beijing. During that time her trophy cabinet has grown considerably, and now features six Paralympic gold medals. Cole is currently working hard to stay fit for the 2020 Paralympic Games, which thanks to the bizarre nature of this year, will take place in 2021. Cole is no stranger to adapting to difficult circumstances though, and has taken the delay in her stride.

“It’s been pretty difficult preparing, we had to push back everything for 12 months. So for this year we are trying to stay fit, but I think that athletes going through this coronavirus period can learn a lot and teach something to kids,” Cole said. “Everything is now back to a relative sense of normalcy, but we did have to get really creative with our training programs, including having Zoom training sessions.” In the 12 years that have passed since Beijing, Cole says that the perception of the Paralympics has improved. “It’s become a lot more professional,” she said. “Now I can train for the Paralympics full time without having to have a full time job. “A lot of people also didn’t understand what the Paralympics really were, but we really saw a jump in interest in Australia after the Commonwealth Games. Now I train with two Olympians, and they’re all really interested in how I do things.” Last week, through the Optus Olympics Unleashed program, Cole returned to her old high school for a Zoom session with sports students. She knows all about overcoming adversity having lost her leg at a young age, and shared her tale of resilience with the students that have done it so tough this year. “It’s really important to stay connected at the moment,” she said about struggling young people this year. “From my experience of going through life and being really adaptive, I know it forces people into making changes. It makes people feel uncomfortable. But, it makes everybody into top people.” SIX-time Paralympic gold medallist Ellie Cole. Picture: Supplied

By Ben Triandafillou THE Jason Warren and Dean Krongold partnership has immediately struck winning form with new stable acquisition Ruby Skye on Sunday 18 October. Formerly in the hands of Sylvia Thompson, the seven-year-old mare has thrived in her new surroundings at Denistoun Park to win her way into the $500,000 Melbourne Cup Carnival Country Series on Kennedy Oaks day (November 5). With her last win coming up eight months ago, Ruby Skye shot straight back to somewhere near her best to take out Heat Five of the Country Series first-up for her new stable at Kilmore. Weaving a passage from the rear of the field, the daughter of Reset came with a determined run to knock off the race-favourite Lord Markel by a quarter of a length. With the victory, Ruby Skye secured her spot in the $500,000 final along with the Wendy Kellytrained runner-up Lord Markel. Warren/Krongold’s racing manager Steve Leonie was thrilled to make an immediate impact with a mare he’s been following for quite some time. “There’ll be a long time before a win gives me more pleasure than that,” Leonie said post-race with a grin from ear to ear. “I’ve been trying to get this horse for some time. I know that sounds terrible, but I love this horse, and always have. The Mcphee’s, from when I was at Luke Oliver’s, very kindly sent her down and I’m just so pleased that we got it done first-up for them. I am just beaming, couldn’t be happier.” Leonie believes the change of environment on

the Mornington Peninsula, with the use of the Balnarring beach, as well as the chiropractic work from Brendan McCarthy has worked wonders for the mare. “[Brendan] came and did her two or three days after arriving at the stables and the release that she showed, was as much as I’ve seen of any horse, so we were quietly confident coming here today,” he said. Now with the first-up win under her belt, Ruby Skye we’ll be targeted towards the final in three weeks’ time before potentially aiming at a country cup. “We’ll take that today and she’ll head to the final,” Leonie said. “I’d love to take her up to the Wodonga Cup for the Mcphee’s since it’s their local track. They’ve won it a few times with horses like Minnie Downs and god it’d be lovely to win another one for them.” The grin never wavered from Leonie’s face as their stable star Brooklyn Hustle heads into the Group One Manikato Stakes (1200m) on Friday night in full flight. “She’s looking fantastic,” Leonie said. “She’s the best she’s been.” “A jockey that rode a treble yesterday at Caulfield (Ben Melham) spun her around on Monday and said ‘that was the best she felt’. James Winks spun her around yesterday at Moonee Valley and I think he’s a good judge, and he said ‘that’s the best she’s felt’ and we’ve got a Caulfield Cup winning rider on her on Friday.” Brooklyn Hustle heads to the Group One fourthup from a spell with her most recent run resulting in a fast-finishing fourth in the Group One Moir Stakes (1000m) at The Valley. Skye’s the limit: Ruby Skye gets back into winning form at her first run for her new stable with Jason Warren and Dean Krongold. Picture: Supplied