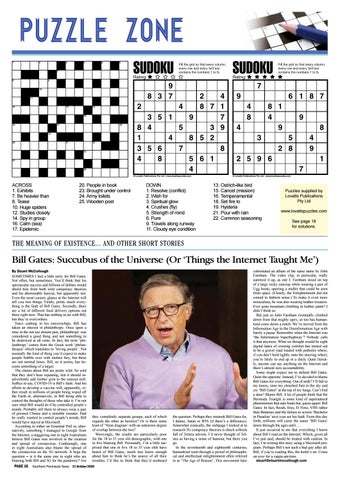 Bill Gates: Succubus of the Universe (Or ‘Things the Internet Taught Me’) By Stuart McCullough SOMETIMES I feel a little sorry for Bill Gates. Not often, but sometimes. You’d think that his spectacular success and billions of dollars would shield him from both wild conspiracy theories and his abominable haircut, but apparently not. Even the most cursory glance at the Internet will tell you two things. Firstly, pretty much everything is the fault of Bill Gates. Secondly, there are a lot of different food delivery options out there right now. That has nothing to do with Bill, but they’re everywhere. Since cashing in his (micro)chips, Bill has taken an interest in philanthropy. Once upon a time in the not too distant past, philanthropy was considered a good thing and not something to be destroyed at all costs. In fact, the term ‘philanthropy’ comes from the Greek work ‘philanthropia’ which translates to ‘loving people’. Not normally the kind of thing you’d expect to make people bubble over with molten fury, but these are not normal times. Bill, so it seems, has become something of a target. The claims about Bill are pretty wild. So wild that they don’t bear repeating, lest it should inadvertently add further grist to the rumour mill. Suffice to say, COVID-19 is Bill’s fault. And his efforts to develop a vaccine will, apparently, either result in millions of people being wiped off the Earth or, alternatively, in Bill being able to control the thoughts of those who take it. I’m not sure what Bill would do if he controlled people’s minds. Probably tell them to always wear a pair of pressed Chinos and a sensible sweater. Had he really wanted to control people’s minds, Bill would have stayed at Microsoft. According to either an Essential Poll or, alternatively, something I managed to Google from the Internet, a staggering one in eight Australians believe Bill Gates was involved in the creation and spread of coronavirus. Confusingly, one in eight Australians also blame the spread of the coronavirus on the 5G network. It begs the question – is it the same one in eight who are blaming both Bill and 5G for the pandemic? Are

they completely separate groups, each of which regards the other as heretics? Or is there some kind of ‘Venn diagram’ with an unknown degree of overlap between the two? Worryingly, the results are particularly poor for the 18 to 35 year old demographic, with one in five blaming Bill. Personally, I’m a little surprised that one in five 18 to 35 year olds have heard of Bill Gates, much less know enough about him to think he’s the source of all their troubles. I’d like to think that they’d misheard

the question. Perhaps they mistook Bill Gates for, I dunno, Satan or BTS (if there’s a difference). Somewhat ironically, the webpage I looked at to research 5G conspiracy theories is chock-a-block full of Telstra adverts. I’d never thought of Telstra as having a sense of humour, but there you go. In the seventeenth and eighteenth centuries, humankind went through a period of philosophical and intellectual enlightenment often referred to as ‘The Age of Reason’. This movement later

culminated an album of the same name by John Farnham. The video clip, in particular, really summed it up, as one J. Farnham stood on top of a large rocky outcrop while wearing a pair of Ugg boots; sporting a mullet that could be seen from space. (Clearly, the Enlightenment did not extend to fashion sense.) To make it even more miraculous, he was also wearing leather trousers. Ever gone mountain climbing in leather pants? I didn’t think so. But just as John Farnham eventually climbed down from that mighty apex, so too has humankind come down a notch. We’ve moved from the Information Age to the Disinformation Age with barely a pause. Remember when the Internet was ‘the Information Superhighway’? Nobody calls it that anymore. What we thought would be eight digital lanes of cruising comfort has turned out to be a gravel road loaded with potholes where, if you don’t hold tightly onto the steering wheel, you’re likely to end up in a ditch. Quite literally, anyone can say anything on the Internet and there’s almost zero accountability. Some might expect me to defend Bill Gates. Quite the opposite. Instead, I’ve decided to blame Bill Gates for everything. Out of milk? I’ll fall to my knees, raise my clenched fists to the sky and cry ‘Bill Gates!’ at the top of my lungs. Can’t find a shoe? Blame Bill. A lot of people think that the Bermuda Triangle is some kind of supernatural phenomenon that eats boats but, guess again: Bill Gates. In fact, floods, fires, El Nino, VHS rather than Betamax and the failure to screen ‘Bachelor in Paradise’ next year are his fault. From this day forth, millions will curse the name ‘Bill Gates’ down through the ages until…. It just occurred to me that everything I know about Bill I read on the Internet. Which, given all I’ve just said, should be treated with caution. In fact, I’m writing this story using a Microsoft program. Perhaps Bill’s not such a bad guy after all. Bill, if you’re reading this, the kettle’s on. Come on over for a cuppa anytime. stuart@stuartmccullough.com