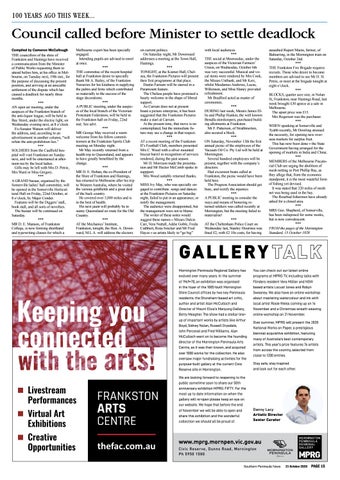 Council called before Minister to settle deadlock Compiled by Cameron McCullough THE councillors of the shire of Frankston and Hastings have received a communication from the Minister of Public Works requesting them to attend before him, at his office in Melbourne, on Tuesday next, 19th inst., for the purpose of discussing the present position, and arriving at an amicable settlement of the dispute which has caused a deadlock for nearly three months. *** AN open air meeting, under the auspices of the Frankston branch of the anti-liquor league, will be held in Bay Street, under the electric light, on Wednesday evening next, at 8 o’clock. Ex-Senator Watson will deliver the address, and, according to an advertisement in another column, “will refute the anti-prohibition lies.” *** SOLDIERS from the Caulfield hospital will visit Frankston on Sunday next, and will be entertained at afternoon tea by the local ladies. Gifts may be left with Mrs D. Petrie, Mrs Ward or Miss Gregory. *** A GRAND bazaar, organised by the Somerville ladies’ hall committee, will be opened in the Somerville Horticultural Hall on Friday, 22nd October, at 8 o’clock, by Major Conder. Features will be the Diggers’ stall, book stall, and all sorts of novelties. The bazaar will be continued on Saturday. *** MR D. E. Manson, of Frankston College, is now forming shorthand and typewriting classes for which a

Melbourne expert has been specially engaged. Intending pupils are advised to enrol at once. *** THE committee of the recent hospital ball at Frankston desire to specially thank Mr A. Bailey, of the Frankston Nurseries for his kindness in supplying the palms and ferns which contributed so materially to the success of the stage decorations. *** A PUBLIC meeting, under the auspices of the local branch of the Victorian Protestant Federation, will be held in the Frankston hall on Friday, 22nd inst. See advt. *** MR George May received a warm welcome from his fellow committeemen at the Frankston Sports Club meeting on Monday night. Mr May recently returned from a health trip to Queensland, and appears to have greatly benefitted by the change. *** MR D. E. Hoban, the ex-President of the Shire of Frankston and Hastings, has returned to Melbourne after his trip to Western Australia, where he visited the various goldfields and a great deal of the back country. He covered over 5,000 miles and is in the best of health. His next jaunt will probably be to sunny Queensland en route for the Old Country. *** AT the Mechanics’ Institute, Frankston, tonight, the Hon. A. Downward, M.L.A. will address the electors

on current politics. On Saturday night, Mr Downward addresses a meeting at the Town Hall, Hastings. *** TONIGHT, at the Kismet Hall, Chelsea, the Frankston Pictures will present their first programme at that place. Dustin Farnum will be starred in a Paramount feature. The Chelsea people have promised a hearty welcome in the shape of liberal support. As Carrum does not at present boast a picture enterprise, it has been suggested that the Frankston Pictures make a start at Carrum. At the present time, that move is no contemplated, but the immediate future may see a change in that respect. *** AT a recent meeting of the Frankston II’s Football Club, members presented Mrs C. Wood with a silver mounted biscuit barrel in recognition of services rendered, during the past season. Mr H. Morrison made the presentation and Mr Hector McComb spoke in suppport. Mrs Wood suitably returned thanks. *** MISS Ivy May, who was specially engaged to contribute. songs and dances at the Frankston Pictures on Saturday night, failed to put in an appearance, or notify the management. The audience were disappointed, but the management were not to blame. The writer of these notes would suggest these names – Misses Dulcie Carr, Vera Nuttall, Addie Goble, Freda Cuthbert, Rosa Sinclair and Mr Fred Hayes – as artists likely to “go big”

with local audiences. *** THE social at Moorooduc, under the auspices of the Victorian Farmers’ Union, on Wednesday, October 6th was very successful. Musical and vocal items were rendered by Mrs Cook, the Misses Unthank, and Mr Kerr, whilst Mesdames Andrews, Lucas, Wilkinson, and Miss Slaney provided refreshment. Mr Bradford acted as master of ceremonies. *** DURING last week, Messrs James Ellis and Phillip Hunkin, the well known Benalla storekeepers, purchased building allotments at Frankston. Mr F. Patterson, of Strathmerton, also secured a block. *** ON Saturday, November 13th the first annual picnic of the employees of the Vacuum Oil Co. Pty Ltd will be held at Mornington. Several hundred employees will be present, together with the company’s directors. Had excursion boats called at Frankston, the picnic would have been held here. The Progress Association should get busy, and rectify the injustice. *** A PUBLIC meeting to consider the ways and means of honoring returned soldiers was called recently at Mornington, but the meeting failed to materialise! *** AT the Cheltenham Police Court on Wednesday last, Stanley Hournies was fined £2, with £2 10s costs, for having

assaulted Rupert Mains, farmer, of Balnarring, in the Mornington train on Saturday, October 2nd. *** THE Frankston Fire Brigade requires recruits. Those who desire to become members are advised to see Mr D. H. Petrie, or meet at the brigade tonight at eight o’clock. *** BLOCKS, quarter acre size, in Nolan St, Frankston, near Hastings Road, last week brought £30 apiece at a sale in Melbourne. The upset price was £15. Mrs Rogerson was the purchaser. *** WHEN speaking at Somerville and Tyabb recently, Mr Dowling stressed the necessity, for opening new overseas markets for surplus fruit. This has now been done – the State Government having arranged for the opening of markets in India and China. *** MEMBERS of the Melbourne Piscatorial Club are urging the abolition of mesh netting in Port Phillip Bay, as they allege that, from the economic standpoint, it is the most wasteful form of fishing yet devised. It was stated that 320 miles of mesh net was being used in the bay. The Rosebud fishermen have already asked for a closed area. *** MRS Geo. Shepherd, of Somerville, has been indisposed for some weeks, but is now convalescent. *** FROM the pages of the Mornington Standard, 15 October 1920

GALLERY TALK Mornington Peninsula Regional Gallery has evolved over many years. In the summer of 1969–70, an exhibition was organised in the foyer of the 1885-built Mornington Shire Council offices by two key Peninsula residents: the Shoreham-based art critic, author and artist Alan McCulloch and Director of Mount Eliza’s Manyung Gallery, Betty Meagher. The show had a stellar lineup of important works by artists like Arthur Boyd, Sidney Nolan, Russell Drysdale, John Perceval and Fred Williams. Alan McCulloch went on to become the founding director of the Mornington Peninsula Arts Centre, as it was then known, and acquired over 1000 works for the collection. He also oversaw major fundraising activities for the purpose-built gallery at the current Civic Reserve site in Mornington. We are looking forward to reopening to the public sometime soon to share our 50th anniversary exhibition MPRG: FIFTY. For the most up to date information on when the gallery will re-open please keep an eye on our website. We hope that before the end of November we will be able to open and share this exhibition and the wonderful collection we should all be proud of.

You can check out our latest online programs at MPRG TV, including talks with Flinders resident Vera Möller and NSW based artists Locust Jones and Robyn Sweaney. We also have an online workshop about mastering watercolour and ink with local artist Rosie Weiss coming up on 14 November and a Christmas wreath weaving online workshop on 21 November. Over summer, MPRG will present the 2020 National Works on Paper, a prestigious biennial acquisitive exhibition, featuring many of Australia’s best contemporary artists. This year’s prize features 76 artists from across the country, selected from close to 1200 entries. Stay safe, stay inspired and look out for each other.