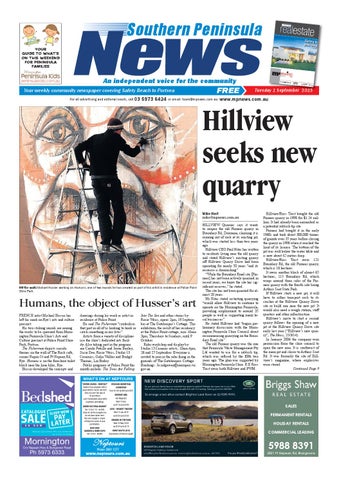 Off the wall: Michael Husser working on Humans, one of two murals he has created as part of his artist in residence at Police Point Shire Park.

Humans, the object of Husser’s art FRENCH artist Michael Husser has left his mark on Rye’s arts and culture precinct. His two striking murals are among the works to be spawned from Mornington Peninsula Shire’s Arts and Culture precinct at Police Point Shire Park, Portsea. The Fisherman depicts seaside themes on the wall of The Rock cafe, corner Napier St and Pt Nepean Rd, Rye. Humans is on the foreshore toilet block near the lime kilns, Rye. Husser developed the concepts and

drawings during his week as artist in residence at Police Point. He said The Fisherman “symbolises that part in all of us looking to hook or catch something in our lives”. Artists from a variety of disciplines use the shire’s dedicated arts facility. Also taking part in the program are Carole Patullo and Jayne Bayley, Susie Dee, Rosie Weiss, Studio 13 Ceramics, Gidja Walker and Bridgit Thomas, Liz Bodey. Public programs at Police Point this month include: The Trees Are Falling

Into The Sea and other stories by Rosie Weiss, opens 2pm, 19 September at The Gatekeeper’s Cottage. This exhibition, the result of her residency at the Police Point cottage, runs 10am3pm, Thursdays to Sundays, until 9 October. Raku workshop and display by Studio 13 Ceramic artists, 10am-4pm, 26 and 27 September. Everyone is invited to join in the raku firing in the grounds of The Gatekeepers Cottage. Bookings: Jo.ridgeway@mornpen.vic. gov.au

HILLVIEW Quarries says it wants to reopen the old Pioneer quarry in Boundary Rd, Dromana, claiming it is running out of rock at its existing pit, which was started less than two years ago. Hillview CEO Paul Nitas has written to residents living near the old quarry and stated Hillview’s existing quarry off Hillview Quarry Drive had been operating for nearly 50 years “and its resource is diminishing”. “While the Boundary Road site [Pioneer] has not been actively quarried in recent years, we know the site has significant reserves,” he stated. The site has not been quarried for almost 20 years. Mr Nitas stated restarting quarrying “would allow Hillview to continue to operate on the Mornington Peninsula, providing employment to around 35 people as well as supporting many local businesses”. He stated Hillview had “begun preliminary discussions with the Mornington Peninsula Shire Council about recommencing quarrying on the Boundary Road site”. The old Pioneer quarry was the one that Peninsula Waste Management Pty Ltd wanted to use for a rubbish tip, which was refused by the EPA two years ago. The plan was supported by Mornington Peninsula Shire. R E Ross Trust owns both Hillview and PWM.

Hillview/Ross Trust bought the old Pioneer quarry in 1998 for $1.24 million. It had already been earmarked as a potential rubbish tip site. Pioneer had bought it in the early 1960s and took about 300,000 tonnes of granite over 35 years before closing the quarry in 1998 when it reached the limit of its licence. The bottom of the pit was well below the water table and is now about 42 metres deep. Hillview/Ross Trust owns 121 Boundary Rd, the old Pioneer quarry, which is 18 hectares. It owns another block of almost 65 hectares, 115 Boundary Rd, which wraps around three sides of the Pioneer quarry with the fourth side being Arthurs Seat State Park. If Hillview starts a new pit, it will have to either transport rock to its crusher at the Hillview Quarry Drive site or build one near the new pit. It would also need a weigh station, staff quarters and other infrastructure. Hillview’s move to start a second quarry follows the opening of a new pit at the Hillview Quarry Drive site early last year (“Hillview’s new quarry”, The News, 25/3/14). In January 2006 the company won permission from the shire council to open the new area. It is southwest of the main pit and closer to Arthurs Seat Rd. It was formerly the site of Hillview’s magazine, where explosives were stored. Continued Page 9

Do you and your family have an overwhelming desire to explore? Perhaps the reason lies in your DNA. Get outdoors and explore in the most versatile SUV with 5+2 seating. Starting price from $62,500.