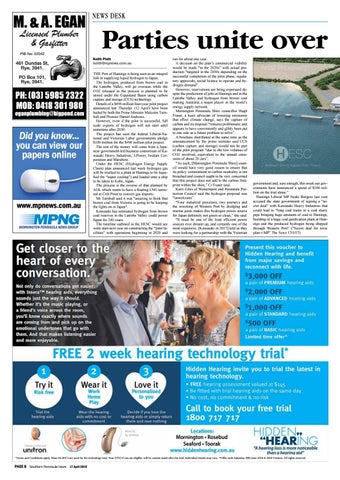 THE Port of Hastings is being seen as an integral link in supplying liquid hydrogen to Japan. The hydrogen, produced from brown coal in the Latrobe Valley, will go overseas while the CO2 released in the process is planned to be stored under the Gippsland Basin using carbon capture and storage (CCS) technology. Details of a $496 million four-year pilot project announced last Thursday (12 April) have been hailed by both the Prime Minister Malcolm Turnbull and Premier Daniel Andrews. However, even if the pilot is successful, full scale exports of hydrogen will not start until sometime after 2030. The project has seen the federal Liberal-National and Victorian Labor governments pledge $100 million for the $496 million pilot project. The rest of the money will come from a Japanese government-led business consortium of Kawasaki Heavy Industries, J-Power, Iwatani Corporation and Marubeni. Under the HESC (Hydrogen Energy Supply Chain) plan announced last week hydrogen gas will be trucked to a plant at Hastings to be liquefied (by “super cooling”) and loaded onto a ship to be taken to Kobe, Japan. The process is the reverse of that planned by AGL which wants to have a floating LNG terminal at Crib Point to convert gas imports. Mr Turnbull said it was “amazing to think that brown coal from Victoria is going to be keeping the lights on in Japan&quot;. Kawasaki has estimated hydrogen from brown coal reserves in the Latrobe Valley could power Japan for 240 years. The timeline outlined in the HESC would see work start next year on constructing the “pilot facilities” with operations beginning in 2020 and

run for about one year. A decision on the plan’s commercial viability would be made “in the 2020s” with actual production “targeted in the 2030s depending on the successful completion of the pilot phase, regulatory approvals, social licence to operate and hydrogen demand”. However, reservations are being expressed despite the predictions of jobs at Hastings and in the Latrobe Valley and hydrogen from brown coal making Australia a major player in the world’s energy supply network. Mornington Peninsula Shire councillor Hugh Fraser, a keen advocate of lowering emissions that effect climate change, says the capture of carbon and its disposal “remains problematic and appears to have conveniently and glibly been put to one side as a future problem to solve”. A brochure distributed at the same time as the announcement by the prime minister said CCS (carbon capture and storage) would not be part of the pilot program “due to the low volumes of CO2 involved, equivalent to the annual emissions of about 20 cars”. “As such, [Mornington Peninsula Shire] council would have very good reason to ensure that its policy commitment to carbon neutrality is not breached and council ought to be very concerned that this project does not add to the carbon footprint within the shire,” Cr Fraser said. Karri Giles of Westernport and Peninsula Protection Council said the hydrogen proposal was “unwelcome”. “Four industrial processes, two journeys and the wrecking of Western Port by dredging and marine pests makes this hydrogen power source for Japan definitely not green or clean,” she said. “It must be one of the least efficient power sources ever dreamt up, and certainly one of the most expensive. [Kawasaki in 2017] told us they were looking for a partnership with the Victorian

government and, sure enough, this week our governments have announced a spend of $100 million on the trial alone.” Hastings Liberal MP Neale Burgess last year accused the state government of signing a “secret deal” with Kawasaki Heavy Industries that could lead to “long coal trains or a coal slurry pipe bringing huge amounts of coal to Hastings, building of a huge coal gasification plant at Hastings and the produced hydrogen being shipped through Western Port” (“Secret deal for toxic plan – MP” The News 17/1/17)

Mornington • Rosebud Seaford • Toorak *Terms and Conditions apply. Moxi Fit (RIC) are used for the technology trial. Your (JTE) if you are eligible, will be custom made after the trial. Individual results may vary. ^Offer ends Saturday, 30th June 2018 © 2018 Unitron. All rights reserved