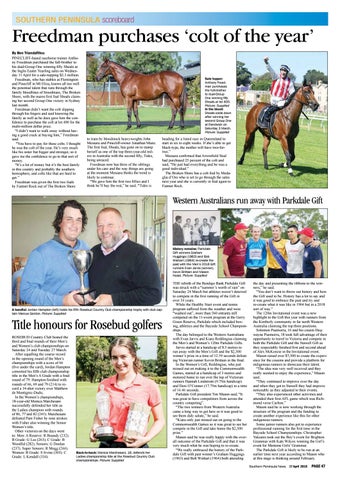 Freedman purchases ‘colt of the year’ By Ben Triandafillou PINECLIFF-based racehorse trainer Anthony Freedman purchased the full-brother to his dual-Group One winning filly Shoals at the Inglis Easter Yearling sales on Wednesday 11 April for a sale-topping $2.3 million. Freedman, who has stables at Flemington and Pinecliff in Mt Eliza, knows all too well the potential talent that runs through the family bloodlines of broodmare, The Broken Shore, with the mares first foal Shoals claiming her second Group One victory in Sydney last month. Freedman didn’t want the colt slipping through his fingers and said knowing the family as well as he does gave him the confidence to purchase the colt at lot 400 for the multi-million dollar price. “I didn’t want to walk away without having a good crack at buying him,” Freedman said. “You have to pay for these colts. I thought he was the colt of the year. He’s very much like his sister but bigger and stronger, so it gave me the confidence to go to that sort of money. “It’s a lot of money but it’s the best family in this country and probably the southern hemisphere, and colts like that are hard to get.” Freedman was given the first two foals by Fastnet Rock out of The Broken Shore

Sale topper: Anthony Freedman purchases the full-brother to dual-Group One winning filly Shoals at lot 400. Picture: Supplied In the blood: Shoals cools down after winning her second Group One at Randwick on Saturday 3 March. Picture: Supplied

to train by bloodstock heavyweights John Messara and Pinecliff-owner Jonathan Munz. The first foal, Shoals, has gone on to stamp herself as one of the top three-year-old milers in Australia with the second filly, Tides, being unraced. Freedman now has three of the siblings under his care and the way things are going at the moment Messara thinks the trend is likely to continue. “We gave him the first two fillies and I think he’ll buy the rest,” he said. “Tides is

heading for a listed race in Queensland to start in six to eight weeks. If she’s able to get black-type, the mother will have two-fortwo.” Messara confirmed that Arrowfield Stud had purchased 25 percent of the colt and said, “He just had everything and he was a good individual.” The Broken Shore has a colt foal by Medaglia d’Oro who is set to go through the sales next year and she is currently in foal again to Fastnet Rock.

Title honours for Rosebud golfers ROSEBUD Country Club hosted the third and final rounds of their Men’s and Women’s club championships on Saturday 24 and Tuesday 27 March. After equalling the course record in the opening round of the Men’s championships with a score of 66 (five under the card), Jordan Hampton cemented his fifth club championship title in the Men’s A Grade with a final round of 79. Hampton finished with rounds of 66, 69 and 79 (214) to record a 14-shot victory over Matthew de Montignic-Dudic. In the Women’s championships, 18-year-old Monica Marchesani successfully defended her title as the Ladies champion with rounds of 86, 77 and 82 (245). Marchesani defeated Pam Fisher by nine strokes with Fisher also winning the Senior Women’s title. Other victories on the days went to: Men: A Reserve: R Boundy (232). B Grade: G Lee (263). C Grade: B Woodful (282). Seniors: G Doolan (237). Super Seniors: R Mogg (244). Women: B Grade: S Irvine (303). C Grade: L Kendall (334).

THE rebirth of the Bendigo Bank Parkdale Gift was struck with a “summer’s worth of rain” on Saturday 24 March but athletes weren’t deterred to compete in the first running of the Gift in over 54 years. While the Healthy Start event and tennis program suffered from the weather and were “washed out”, more than 560 entrants still competed on the 11-event program at the Gerry Green Reserve, Parkdale which included boxing, athletics and the Bayside School Championships. The day belonged to the Western Australians with Evan Jarvis and Kiara Reddingius claiming the Men’s and Women’s 120m Parkdale Gifts. Jarvis started at a handicap of 8.5 metres to run away with the Men’s Gift and the $2,500 winner’s prize in a time of 12.59 seconds defeating Victorian runner Kevin Brittain in the final. In the Women’s Gift, Reddingius, who just missed out on making it to the Commonwealth Games, started at a handicap of 3 metres and motored home to run over the top of Victorian runners Hannah Lindstrom (9.75m handicap) and Deni O’Connor (17.75m handicap) in a time of 14.46 seconds. Parkdale Gift president Tim Mason said, “It was great to have competitors from across the country competing”. “The two winners from Western Australia came a long way to get here so it was good to see them duly salute,” he said. “Kiara only just missed out on going to the Commonwealth Games so it was great to see her compete in the Gift and take home the $2,500 prize.” Mason said he was really happy with the overall outcome of the Parkdale Gift and that it was very much what he was hoping to re-create. “We really embraced the history of the Parkdale Gift with past winner’s Graham Huggings (1963) and Bob Wishart (1964) both attending

the day and presenting the ribbons to the winners,” he said. “You don’t want to throw out history and how the Gift used to be. History has a lot to say and it was good to embrace the past and try and re-create what it was like in 1964 but in a 2018 sort of way.” The 120m Invitational event was a new highlight to the Gift this year with runners from the Kimberly community in far north Western Australia claiming the top three positions. Solomon Puemorra, 16 and his cousin Deqwayne Puemorra, 18 took full advantage of their opportunity to travel to Victoria and compete in both the Parkdale Gift and the Stawell Gift as they respectably finished first and second ahead of Alex McKenzie in the Invitational event. Mason raised over $7,500 to create the experience for the cousins and provide a platform for indigenous runners to showcase their talent. “The idea was very well received and they really seemed to enjoy the experience,” Mason said. “They continued to improve over the day and when they got to Stawell they had improve noticeably as they adjusted to their events. “They also experienced other activities and attended their first AFL game which was Richmond verse Carlton.” Mason said he is now working through the structure of the program and the funding to create another experience like this for other indigenous runners. Some junior runners also got to experience professional running for the first time in the Bayside School Championships. Christopher Valcanis took out the Boy’s event for Brighton Grammar with Kate Wilcox winning the Girl’s event for Mentone Girls’ Grammar. The Parkdale Gift is likely to be run at an earlier time next year according to Mason who at this stage is thinking around February. Southern Peninsula News