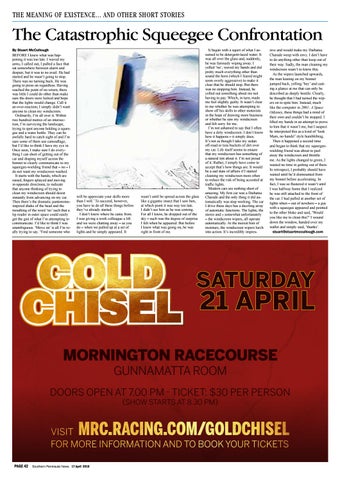 The Catastrophic Squeegee Confrontation By Stuart McCullough BEFORE I knew what was happening it was too late. I waved my arms, I called out, I pulled a face that sat somewhere between alarm and despair, but it was to no avail. He had started and he wasn’t going to stop. There was no turning back. He was going to press on regardless. Having reached the point of no return, there was little I could do other than make sure the doors were locked and hope that the lights would change. Call it an over-reaction; I simply didn’t want anyone to clean my windscreen. Ordinarily, I’m all over it. Within two hundred metres of an intersection, I’m surveying the landscape, trying to spot anyone holding a squeegee and a water bottle. They can be awfully hard to catch sight of and I’m sure some of them use camouflage, but I’d like to think I have my eye in. Once seen, I make sure I do everything I can short of getting out of the car and draping myself across the bonnet to clearly communicate to my squeegee-wielding friend that – no – I do not want my windscreen washed. It starts with the hands, which are raised, fingers splayed and moving in opposite directions, to indicate that anyone thinking of trying to clean my windscreen should desist instantly from advancing on my car. Then there’s the dramatic pantomimeinspired shake of the head and the mouthing of the word ‘no’ such that a lip reader in outer space could easily get the gist of what I’m attempting to communicate. I’d like to think I was unambiguous. ‘Move on’ is all I’m really trying to say. ‘Find someone who

will be appreciate your skills more than I will.’ To succeed, however, you have to do all these things before they’ve already started. I don’t know where he came from. I was giving a work colleague a lift and we were chatting away – as you do – when we pulled up at a set of lights and he simply appeared. It

wasn’t until he spread across the glass like a gigantic insect that I saw him, at which point it was way too late. I didn’t see him as he was coming. For all I know, he dropped out of the sky – such was the degree of surprise I felt when he appeared. But before I knew what was going on, he was right in front of me.

It began with a squirt of what I assumed to be detergent-laced water. It was all over the glass and, suddenly, he was furiously wiping away. I yelled ‘no’, waved my hands and did pretty much everything other than sound the horn (which I feared might seem overly aggressive) to make it clear that he should stop. But there was no stopping him. Instead, he yelled out something about me not having to pay. Which, in turn, made me feel slightly guilty. It wasn’t clear to me whether he was attempting to show off his skills to other motorists in the hope of drawing more business or whether he saw my windscreen and felt sorry for me. I’m not ashamed to say that I often have a dirty windscreen. I don’t know how it happens – it simply does. It’s not as though I take my sedan off-road or toss buckets of dirt over my car. Life itself seems to ensure that my windscreen has something of a natural tint about it. I’m not proud of it. Rather, I simply have come to accept that’s how things are. It would be a sad state of affairs if I started cleaning my windscreen more often to reduce the risk of being accosted at traffic lights. Modern cars are nothing short of amazing. My first car was a Daihatsu Charade and the only thing it did automatically was stop working. The car I drive these days has a dazzling array of automatic functions. The lights, the stereo and – somewhat unfortunately – the windscreen wipers, all operate automatically. At the merest hint of moisture, the windscreen wipers lurch into action. It’s incredibly impres-

sive and would make my Daihatsu Charade weep with envy. I don’t have to do anything other than keep out of their way. Sadly, the man cleaning my windscreen wasn’t to know this. As the wipers launched upwards, the man leaning on my bonnet jumped back, yelling ‘hey’ and casting a glance at me that can only be described as deeply hostile. Clearly, he thought that I had turned the wipers on to spite him. Instead, much like the computer in 2001: A Space Odyssey, these things had a mind of their own and couldn’t be stopped. I lifted my hands in an attempt to prove to him that it wasn’t me, but I suspect he interpreted this as a kind of ‘look Mum, no hands!’ style humblebrag. Then it happened a second time and began to think that my squeegeewielding friend was about to peel away the windscreen and throttle me. As the lights changed to green, I wasted no time in getting out of there. In retrospect, I probably should have waited until he’d dismounted from my bonnet before accelerating. In fact, I was so flustered it wasn’t until I was halfway home that I realized he was still attached to the front of the car. I had pulled at another set of lights when – out of nowhere – a guy with a squeegee appeared and pointed to the other bloke and said, ‘Would you like me to clean this?’ I wound down the window, handed over my wallet and simply said, ‘thanks’. stuart@stuartmccullough.com