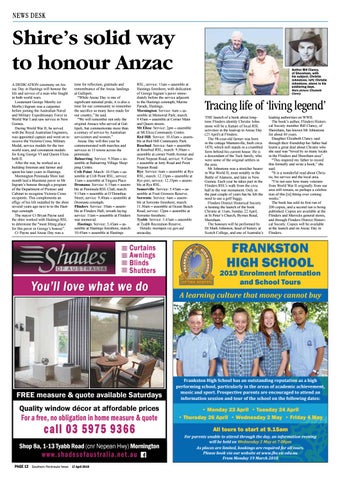 Shire’s solid way to honour Anzac A DEDICATION ceremony on Anzac Day in Hastings will honour the life and service of a man who fought in both world wars. Lieutenant George Mawby (or Morby) Ingram was a carpenter before joining the Australian Naval and Military Expeditionary Force in World War I and saw service in New Guinea. During World War II, he served with the Royal Australian Engineers, was appointed captain and went on to receive the Victoria Cross, Military Medal, service medals for the two world wars, and coronation medals for King George VI and Queen Elizabeth II. After the war, he worked as a building foreman and farmer and spent his later years in Hastings. Mornington Peninsula Shire last month laid a bluestone paver in Mr Ingram’s honour through a program of the Department of Premier and Cabinet to recognise Victoria Cross recipients. This complements an effigy of his life installed by the shire several years ago next to to the Hastings cenotaph. The mayor Cr Bryan Payne said the shire worked with Hastings RSL to determine the “most fitting place for this paver in George’s honour”. Cr Payne said Anzac Day was a

For a free, no obligation in home measure &amp; quote

Tracing life of ‘living legend’ THE launch of a book about longtime Flinders identity Christie Johnstone will be a feature of local RSL activities in the lead-up to Anzac Day (25 April) at Flinders. The 98-year-old farmer was born in the cottage Mantonville, built circa 1870, which still stands in a crumbled form behind his current house. He is a descendant of the Tuck family, who were some of the original settlers in the area. Mr Johnstone was a stretcher bearer in War World II, most notably in the Battle of Alamein, and later in New Guinea. Each year he takes part in the Flinders RSL’s walk from the civic hall to the war monument. Only in the past couple of years has he felt the need to use a golf buggy. Flinders District Historical Society is hosting the launch of the book Christie at 11am, Sunday 22 April, at St Peter’s Church, Byrnes Road, Shoreham. The honours will be performed by Dr Mark Johnston, head of history at Scotch College, and one of Australia’s

leading authorities on WWII. The book’s author, Flinders Historical Society member Bill Clancy, of Shoreham, has known Mr Johnstone for about 40 years. Daughter Elizabeth Clancy said through their friendship her father had learnt a great deal about Christie who she said was “loved by so many locals in the Flinders and Shoreham area”. “This inspired my father to record this formally and write a book,” she said. “It is a wonderful read about Christie, his service and the local area. “I’m not sure how many veterans from World War II originally from our area still remain, so perhaps a celebration of this [is] fitting over coming weeks.” The book has sold its first run of 200 copies, and a second run is being published. Copies are available at the Flinders and Merricks general stores, and through Flinders District Historical Society. Copies will be available at the launch and on Anzac Day in Flinders.

All tours to start at 9.15am For parents unable to attend through the day, an information evening will be held on Wednesday 2 May at 7.00pm As places are limited, bookings are required for all tours. Please book via our website at www.fhs.vic.edu.au From Monday 19 March 2018