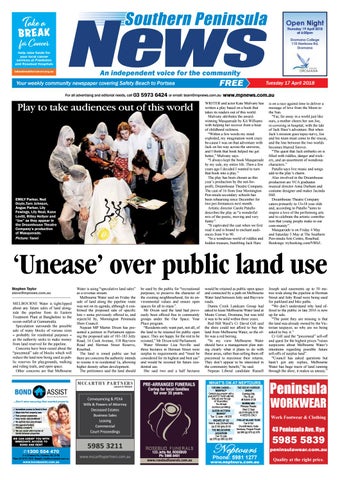 Play to take audiences out of this world

WRITER and actor Kate Mulvany has written a play based on a book that takes its readers out of this world. Mulvany attributes the awardwinning Masquerade by Kit Williams with helping her recover from a bout of childhood sickness. “Within a few words my mind exploded, my imagination went crazy be-cause I was on that adventure with Jack on his way across the universe, and I think that book helped me get better,” Mulvany says. “I always kept the book Masquerade by my side, my entire life. Then a few years ago I decided I wanted to turn that book into a play.” The play has been chosen as this year’s production by the not-forprofit, Dreamhouse Theatre Company. The cast of 16 from four Mornington Pen-insula secondary schools has been rehearsing since December for two per-formances next month. Artistic director Carole Patullo describes the play as “a wonderful mix of the poetic, moving and very funny”. “It captivated the cast when we first read it and is bound to enchant audiences from 9 to 90. “In a wondrous world of riddles and hidden treasure, bumbling Jack Hare

is on a race against time to deliver a message of love from the Moon to the Sun. “Far, far away in a world just like ours, a mother cheers her son Joe, re-covering in hospital, with the tale of Jack Hare’s adventure. But when Jack’s mission goes topsy-turvy, Joe and his mum must come to the rescue, and the line between the two worlds becomes blurred forever. “The quest that Jack embarks on is filled with riddles, danger and trickery, and an assortment of wondrous characters.” Patullo says live music and songs add to the play’s charm. Also involved in the Dreamhouse production are VCA graduates musical director Anna Durham and costume designer and maker Jacinda Hill. Dreamhouse Theatre Company caters primarily to 13–18 year olds and, according to Patullo “aims to inspire a love of the performing arts and to celebrate the artistic contribution that young people make to our com-munity”. Masquerade is on Friday 4 May and Saturday 5 May at The Southern Pen-insula Arts Centre, Rosebud. Bookings: trybooking.com/VBSZ.

‘Unease’ over public land use Stephen Taylor steve@mpnews.com.au MELBOURNE Water is tight-lipped about any future sales of land alongside the pipeline from its Eastern Treatment Plant at Bangholme to the ocean outfall at Gunnamatta. Speculation surrounds the possible sale of many blocks of various sizes – probably for residential purposes – as the authority seeks to make money from land reserved for the pipeline. Concerns have been raised about the “piecemeal” sale of blocks which will reduce the land now being used as public reserves for playgrounds, walking and riding trails, and open space. Other concerns are that Melbourne

Water is using “speculative land sales” as a revenue stream. Melbourne Water said on Friday the sale of land along the pipeline route was not on its agenda, although it confirmed the proposed sale of specific lots – some previously offered to, and rejecte3d by, Mornington Peninsula Shire Council. Nepean MP Martin Dixon has presented a petition in Parliament opposing the proposed sale of 181-183 Jetty Road, 14 Cook Avenue, 318 Bayview Road and Herman Street Reserve, Rosebud. The land is zoned public use but there are concerns the authority intends to rezone it to residential 1a, allowing higher density urban development. The petitioners said the land should

be used by the public for “recreational purposes; to preserve the character of the existing neighbourhood, for its environmental values and ensure open spaces for all to enjoy”. Mr Dixon said the land had previously been offered free to community groups under the Our Space. Your Place program. “Residents only want part, not all, of the land to be retained for public open space. They are happy for the rest to be rezoned,” Mr Dixon told Parliament. Water Minister Lisa Neville said three hectares in Herman Street were surplus to requirements and “must be considered for its highest and best use” and would be rezoned for future residential use. She said two and a half hectares

would be retained as public open space and connected by a path on Melbourne Water land between Jetty and Bayview roads. Dunns Creek Landcare Group had asked to lease Melbourne Water land at Moats Corner, Dromana, but was told it was to be sold within three years. Red Hill Ward’s Cr David Gill said the shire could not afford to buy the land from Melbourne Water, so the offer was a red herring. “In my view Melbourne Water should have a management plan stating clearly what it plans to do with these areas, rather than selling them off piecemeal to maximise their returns. They don’t appear to be interested in the community benefit,” he said. Nepean Liberal candidate Russell

Caring for local families for over 35 years.

Caring for local families for over 35 years.

Joseph said easements up to 50 metres wide along the pipeline at Herman Street and Jetty Road were being used for parkland and bike paths. “We don’t understand why land offered to the public in late 2016 is now up for sale. “The point they are missing is that the land was already owned by the Victorian taxpayer, so why are we being asked to buy it.” Cr Gill said the “piecemeal” sell-off and quest for the highest prices “raises suspicions about Melbourne Water’s intentions regarding possible future sell-offs of surplus land”. “Council has asked questions but hasn’t got any replies, Melbourne Water has huge tracts of land running through the shire; it makes us uneasy.”

Quality at the right price.