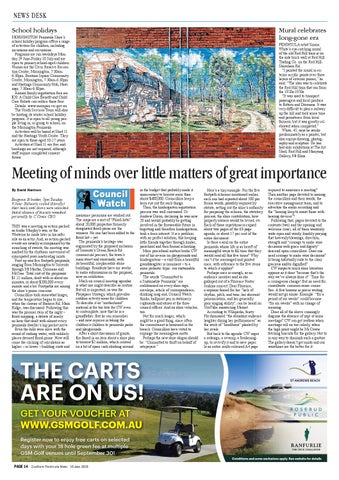 MORNINGTON Peninsula Shire’s school holiday program offers a range of activities for children, including incursions and excursions. Programs are run weekdays Monday 29 June-Friday 10 July and are open to primary school-aged children. Venues are the Civic Reserve Recreation Centre, Mornington, 7.30am6.30pm; Bentons Square Community Centre, Mornington, 7.30am-6.30pm and Hastings Community Hub, Hastings, 7.30am-6.30pm. Annual family registration fees are $20. A Child Care Benefit and Child Care Rebate can reduce these fees. Details: www.mornpen.vic.gov.au The Youth Services Team will also be hosting its winter school holiday program. It is open to all young people living in, or going to school, on the Mornington Peninsula. Activities will be based at Shed 11 and the Hastings Youth Centre. They are open to those aged 10-17 years. Activities at Shed 11 are free and bookings are not required, although staff require completed consent forms.

PENINSULA artist Simon White’s eye-catching mural of the old Red Hill train is on the side brick wall at Red Hill Trading Co. on the Red HillShoreham Rd. “I painted the mural in exterior acrylic paints over three layers of exterior primer,” he said. “The idea was to celebrate the Red Hill train that ran from the 1920s-1950s. “It was used to transport passengers and local produce to Bittern and Dromana. It was very difficult to plan a railway up the hill and took some time and persistence from local farmers, but it was greatly celebrated when completed.” White, 45, says he works predominately as a painter, but also enjoys drawing, photography and sculpture. He has had solo exhibitions at The Art Shed, Red Hill and Manyung Gallery, Mt Eliza.

Meeting of minds over little matters of great importance By David Harrison Besgrove St bunker, 7pm Tuesday 9 June. Stalwarts cooled (literally) their heels until doors were unlocked. Initial absence of biscuits remedied personally by C Cowie CEO. THIS was a meeting as action-packed as Audie Murphy’s war, or the Westerns he made later in his safer role as an actor. And, as action-packed events are usually accompanied by the munching of sweets, the meeting was marked by the rhythmic movement of syncopated jaws masticating mints. First up was five footpath proposals, ranging from Mornington to Sorrento through Mt Martha, Dromana and McCrae. Total cost of the proposals: $1.22 million, dealt with in about six minutes, or about $200,000 every minute and a bit. Footpaths are among the shire’s prime concerns. Councillors took somewhat longer, and the temperature began to rise, when the closure of Barkers Rd, Main Ridge, was discussed. Following this was the premier item of the night – flood mapping, a debate of nearly an hour that dealt with almost every peninsula dweller’s hip pocket nerve. Even the hills were alive with the sound of rushing water, with unlikely places deemed flood-prone. Now will come the clicking of calculators as higher – or lower – building costs and

insurance premiums are worked out. The maps are a sort of “Flood-lotto”: about 20,000 properties formerly designated flood-prone are the winners. No one has been added to the flood list – yet. The peninsula’s heritage was augmented by the proposed inclusion of Sorrento’s Ocean Beach Rd commercial precinct, the town’s main street and surrounds, with its beautiful, irreplaceable stone buildings. Residents have six weeks to make submissions on the proposal, now on exhibition. Much on council meeting agendas is what one might describe as routine. But all is important, as was the Playspace Strategy, which provides outdoor activity areas for children. To describe it as “motherhood” material is for too trite for CW even to contemplate, now that he is a grandfather. But he can remember – and now rejoices in taking the children’s children to peninsula parks and playgrounds. After a short discussion of grants, fire flared in an item about a shire plan to borrow $2 million, which centred on a bit of spare cash sloshing around

in the budget that probably made it unnecessary to borrow more than about $400,000. Councillors keep a keen eye out for such things. Then, the kindergarten registration process was well canvassed. Cr Andrew Dixon, declaring he was now 28 and would probably be getting involved in the foreseeable future in begetting and therefore kindergartens, took a keen interest. It is a problem with no perfect solution, this keeping little friends together through kinder, preschool and then formal schooling. More procedural matters broke CW out of his reverie on playgrounds and kindergartens – a visit from a beautiful granddaughter is imminent – to a more pedantic topic: our sustainable peninsula. The words “Committed to a Sustainable Peninsula” are emblazoned on every shire sign, envelope, article of correspondence, drinking mug and, Council Watch thinks, ballpoint pen in stationery cupboards and stores at the three council offices. And on shire vehicles, too. Not for much longer, which might be a good thing, since often the commitment is honoured in the breach. Councillors have voted to expunge the meaningless motto. Perhaps the new shire slogan should be: “Committed to thrift on behalf of ratepayers.”

Here’s a tiny example: For the five footpath schemes mentioned earlier, each one had repeated about 500 pro forma words, possibly required by statute, setting out the shire’s authority for preparing the scheme, the statutory process, the shire contribution, how property owners would be levied, etc. Each of these repetitions occupied about two pages of the 63-page agenda, or about 17 per cent of the entire document. Is there a soul on the entire peninsula whose life is so bereft of meaningful ways to fill time that they would read all this five times? Why can’t it be rearranged and printed once, with reference to the five items to which it applies? Perhaps once is enough, as an audience member said as she galloped out of a Florence Foster Jenkins concert. Dear Florence, a soprano famed for her “lack of rhythm, pitch, and tone; her aberrant pronunciation; and her generally poor singing ability”, can be heard on YouTube massacring Mozart. According to Wikipedia, feisty Flo dismissed “the abundant audience laughter during her performances” as the work of “hoodlums” planted by her rivals. But back to the agenda. CW urges a redesign, a revamp, a fresheningup, to revivify it and to save paper. Is an entire multi-coloured A4 page

required to announce a meeting? Then another page devoted to naming the councillors and their wards, the executive management team, and to advertise the audio recording and the “hearing loop to assist those with hearing devices”? Following that, pages devoted to the contents (two) and the opening and welcome (one), all of them wantonly wide-open and windy, humbly praying that heavenly blessings, direction, strength and “courage to make wise decisions with grace and dignity” descend upon councillors. Does one need courage to make wise decisions? Is being habitually rude to the chair gracious and/or dignified? CW suspects much shire literature appears as it does “because that’s the way we’ve always done it”. Time for a courageous change! But no need for consultants: common sense comes free. A few lessons in précis writing would not go amiss. Example: “for a period of six weeks” could become “for six weeks” with no change of meaning. Does all of the above cunningly disguise the absence of zap! at some meetings? CW can get restless when meetings roll on too calmly, when the high point might be Mr Cowie fetching biscuits for the gallery. Not to in any way to diminish such a gesture. The gallery doesn’t get mints and our waistlines are the better for it.