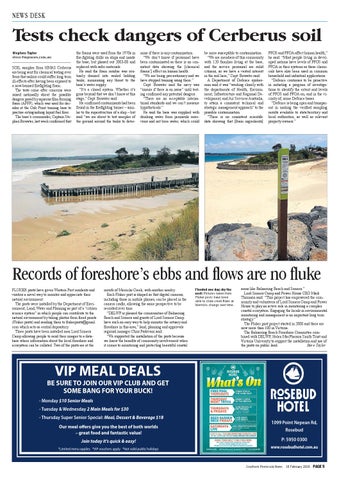 Tests check dangers of Cerberus soil Stephen Taylor steve@mpnews.com.au SOIL samples from HMAS Cerberus are being sent for chemical testing over fears that sailors could suffer long term ill-effects after having been exposed to a now-banned firefighting foam. The tests come after concerns were raised nationally about the possible dangers posed by aqueous film-forming foam (AFFF), which was used for decades at the Crib Point training base to practise extinguishing liquid fuel fires. The base’s commander, Captain Stephen Bowater, last week confirmed that

the foams were used from the 1970s in fire-fighting drills on ships and inside the base, but phased out 2003-08 and replaced with safer materials. He said the foam residue was routinely drained into sealed holding tanks, minimising any threat to the base’s water supply. “It’s a closed system. Whether it’s gone beyond that we don’t know at this stage,” Capt. Bowater said. He confirmed contaminants had been found in the firefighting trainer – similar to the superstructure of a ship – but said “we are about to test samples of the ground around the tanks to deter-

mine if there is any contamination. “We don’t know if personnel have been contaminated as there is no consistent data showing the [chemical foams’] effect on human health. “We are being precautionary and we have stopped training using them.” Capt. Bowater said the navy was “unsure if there is an issue” until testing confirmed any potential dangers. “There are no acceptable international standards and we can’t measure hypotheticals.” He said the base was supplied with drinking water from peninsula reservoirs and not bore water, which could

be more susceptible to contamination. “We are members of this community with 120 families living at the base, and the service personnel are solid citizens, so we have a vested interest in the soil here,” Capt. Bowater said. A Department of Defence spokesman said it was “working closely with the departments of Health, Environment, Infrastructure and Regional Development, and Air Services Australia, to attain a consistent technical and strategic management approach” to the possible contamination. “There is no consistent scientific data showing that [foam ingredients]

PFOS and PFOA affect human health,” he said. “Most people living in developed nations have levels of PFOS and PFOA in their systems as these chemicals have also been used in common household and industrial applications. “Defence continues to be proactive in initiating a program of investigations to identify the extent and levels of PFOS and PFOA on, and in the vicinity of, some Defence bases. “Defence is being open and transparent in making the verified sampling results available to state/territory and local authorities, as well as relevant property owners.”

Records of foreshore’s ebbs and flows are no fluke FLUKER posts have given Western Port residents and visitors a novel way to monitor and appreciate their natural environment. The posts were installed by the Department of Environment, Land, Water and Planning as part of a “citizen science system” in which people can contribute to the natural environment by taking photos from fixed points (Fluker posts) and sending them to flukerposts@gmail. com which acts as central depository. Three posts have been installed near Lord Somers Camp allowing people to send their images to a database where information about the local foreshore and ecosystem can be collated. Two of the posts are at the

mouth of Merricks Creek, with another nearby. Each Fluker post is shaped so that digital cameras, including those in mobile phones, can be placed in the camera cradle, allowing the same perspective to be recorded over time. “DELWP is pleased the communities of Balnarring Beach and Somers and guests of Lord Somers Camp have such an easy way to help monitor the estuary and foreshore in this area,” land, planning and approvals regional manager Chris Padovani said. “We supported the installation of the posts because we know the benefits of community involvement when it comes to monitoring and protecting beautiful coastal

Flooded one day; dry the next: Pictures taken from Fluker posts have been able to show creek flows at Merricks change over time.

areas like Balnarring Beach and Somers.” Lord Somers Camp and Power House CEO Mark Thomson said: “This project has empowered the community and volunteers of Lord Somers Camp and Power House to play an active role in monitoring a complex coastal ecosystem. Engaging the locals in environmental monitoring and management is an important long term strategy.” The Fluker post project started in 2008 and there are now more than 100 in Victoria. The Balnarring Beach Foreshore Committee combined with DELWP, Helen MacPherson Smith Trust and Victoria University to support the installation and use of the posts on public land. Steve Taylor

VIP MEAL DEALS BE SURE TO JOIN OUR VIP CLUB AND GET SOME BANG FOR YOUR BUCK! - Monday $10 Senior Meals - Tuesday & Wednesday 2 Main Meals for $30 - Thursday Super Senior Special: Meal, Dessert & Beverage $18 Our meal offers give you the best of both worlds – great food and fantastic value!