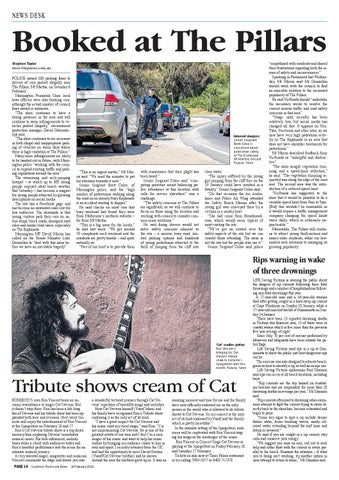 Booked at The Pillars Stephen Taylor steve@mpnews.com.au POLICE issued 100 parking fines to drivers of cars parked illegally near The Pillars, Mt Martha, on Saturday 6 February. Mornington Peninsula Shire local laws officers were also booking cars, although the actual number of council fines issued is unknown. “The shire continues to have a strong presence in the area and will continue to issue infringements to vehicles parked illegally,” environment protection manager David Dobroszczyk said. “The shire continues to see increases in both illegal and inappropriate parking of vehicles on warm days where there is high visitation at The Pillars.” Many more infringements are likely to be handed out in future, with Mornington police “working with the council to expand existing traffic and parking regulations around the area”. The swimming and rock-jumping hotspot – at which up to 300 young people enjoyed ideal beach weather that Saturday – has become a magnet for young people attracted by glowing descriptions on social media. The site has a Facebook page and has become an unwanted cash cow for law enforcers. The downside is that young visitors park their cars on nature strips, block roads, disregard road rules and hinder road users, especially on The Esplanade. Mornington MP David Morris has called on the Roads Minister Luke Donnellan to “deal with this issue before we have an inevitable tragedy”.

“This is an urgent matter,” Mr Morris said. “We need the minister to put his attention towards it now.” Senior Sergeant Brett Coloe, of Mornington police, said the “high number of pedestrians walking along the road on an already busy Esplanade is an accident waiting to happen”. He said checks on most cars that busy weekend had found they were from Melbourne’s northern suburbs – far from Mt Martha. “This is a big issue for the locals,” he said last week. “We get around 50 complaints each weekend and the residents are pretty hostile – and quite naturally so. “Part of our brief is to provide them

with reassurance that their plight has been heard.” Senior Sergeant Coloe said “competing priorities meant balancing police attendance at this location with calls for service elsewhere” was a challenge. “The safety concerns at The Pillars are significant, so we will continue to focus on those using the location and working with council to consider common sense solutions.” He said fining drivers would not solve safety concerns inherent to the site – a narrow, busy road, limited parking options and hundreds of young pedestrians attracted to the thrill of jumping from the cliff into

clear water. “The injury suffered by the young girl jumping from the cliff face on the 19 January could have resulted in a fatality,” Senior Sergeant Coloe said. “On that occasion the Air Ambulance and Police Air Wing attended the Safety Beach Marina after the young girl was conveyed there by a civilian in a nearby boat. “She had come from Broadmeadows, which would seem typical of most visiting the site. “We’ve got no control over the safety aspects of the site but we can control those attending. The issue is not the site but the people who use it.” Senior Sergeant Coloe said police

“empathised with residents and shared their frustrations regarding both the issues of safety and inconvenience”. Speaking in Parliament last Wednesday, Mr Morris said Mr Donnellan should work with the council to find an amicable solution to the increased popularity of The Pillars. He said VicRoads should “undertake the necessary works to resolve the current serious traffic and road safety concerns in that area”. “Usage until recently has been relatively low, but social media has changed all that. It appears on YouTube, Facebook and other sites, so we now have very high pedestrian activity on The Esplanade in an area that does not have shoulder treatments for pedestrians.” Mr Morris described feedback from VicRoads as “unhelpful and obstructive”. “The shire sought vegetation trimming and a speed-limit reduction,” he said. “The vegetation trimming requested was along the edge of the road seal. The second area was the introduction of a reduced speed limit. “VicRoads has suggested to the shire that it would be possible to do a variable speed limit from 9am to 9pm. [But] this wouldn’t be reasonable as it would require a traffic management company changing the speed limits twice daily, which is extremely impracticable.” Meanwhile, The Pillars will continue to attract young thrill-seekers and annoy older residents, while our lawmakers seek solutions to managing its growing popularity.

Tribute shows cream of Cat ROSEBUD’S own Ron Vincent bears an uncanny resemblance to singer Cat Stevens. But it doesn’t stop there. Ron has been a life-long fan of Stevens and his tribute show has been applauded both here and overseas. Next week Sorrento will enjoy the entertainment of Ron Vincent at the Spiegeltent on February 26 and 27. Ron’s Cat Stevens tribute show is a trip down memory lane exploring Stevens’ remarkable musical career. His folk-influenced, melodic tunes strike a chord with audiences today and Ron’s heartfelt performance sets the scene for an intimate musical journey. A very talented singer, songwriter and musician Vincent commands the stage and draws you into

a wonderful textured journey through Cat Stevens’ repertoire of beautiful songs and melodies. Now Cat Stevens himself (Yusuf Islam) and his family have recognised Ron’s Tribute show endorsing it as the only act of its kind. “I have a great respect for Cat Stevens and his music suits my vocal range,” said Ron. “I’m not impersonating Cat Stevens. He is one of the greatest artists of our time and I feel I’m a messenger of his music and want to help his music endure by bringing my audience closer to him in soul and spirit. I recently returned from the UK and had the opportunity to meet David Gordon (Yusuf/Cat Stevens’ brother) and be shown around the area the brothers grew up in. It was an

amazing moment and time for me and the family have now officially endorsed me as the only person in the world who is allowed to do tribute shows to Cat Stevens. So my concert is the only act of its kind endorsed by Yusuf and the family which is pretty incredible.” In the intimate setting of the Spiegeltent, audiences will be captivated with Ron Vincent singing his songs as the messenger of the music. Ron Vincent in Concert Sings Cat Stevens is playing at the Spiegeltent on Friday February 26 and Saturday 27 February. Tickets on sale now at Three Palms restaurant or by calling 5984 1057 or 0403 715378.

LIFE Saving Victoria is warning the public about the dangers of rip currents following three fatal drownings and a number of hospitalisations following non-fatal drownings this year. A 27-year-old man and a 34-year-old woman died after getting caught in a knee-deep rip current at Cape Woolamai on Sunday 10 January, while a 27-year-old man lost his life at Gunnamatta on Sunday 24 January. There have been 23 reported drowning deaths in Victoria this financial year, 13 of those were in coastal waters which is five more than the previous five year average of eight. Since July, 78 per cent of rescues performed by lifesavers and lifeguards have been outside the patrol flags. Life Saving Victoria used dye in a rip at Gunnamatta to show the public just how dangerous rips can be. The exercise was also designed to educate beachgoers on how to identify a rip, as well as escape one. Life Saving Victoria spokesman Paul Shannon said rips can occur at all beach locations, including bays. “Rip currents are the top hazard on Australian beaches and are responsible for more than 20 drowning deaths on average per year,’’ Mr Shannon said. “Rip currents often lead to drowning when swimmers attempt to fight the current trying to swim directly back to the shoreline, become exhausted and begin to panic. “Some key signs to spot a rip include deeper darker water, fewer breaking waves, sandy coloured water extending beyond the surf zone and debris or seaweed.’’ He said if you are caught in a rip current, stay calm and conserve your energy. “We suggest you raise an arm, call out to seek help and either float with the current or swim parallel to the beach. Reassess the situation – if what you’re doing isn’t working, try another option in your attempt to return to shore,’’ Mr Shannon said.