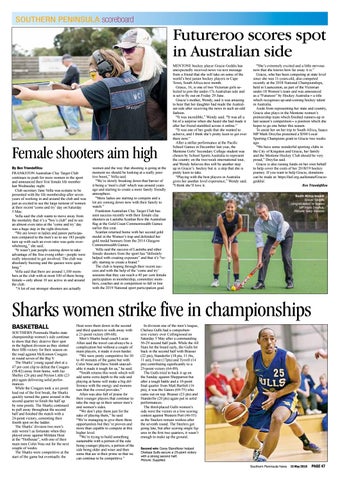 Futureroo scores spot in Australian side

Female shooters aim high By Ben Triandafillou FRANKSTON Australian Clay Target Club continues to push for more women in the sport and announced their first female life member last Wednesday night. Club secretary Jane Vella was ecstatic to be presented with the life membership after seven years of working in and around the club and was just as excited to see the large turnout of women at their recent ‘come and try’ day on Saturday 5 May. Vella said the club wants to move away from the mentality that it’s a “boy’s club” and to see an almost even ratio at the ‘come and try’ day was a huge step in the right direction. “We are lower in ladies and junior participation compared to the men’s so to see 183 people turn up with such an even ratio was quite overwhelming,” she said. “It wasn’t just people coming down to take advantage of the free eveng either - people were really interested to get involved. The club was absolutely buzzing and the queues were quite long.” Vella said that there are around 1,100 members at the club with at most 100 of them being female – only about 10 are active in and around the club. “A lot of our stronger shooters are actually

women and the way that shooting is going at the moment we should be looking at a really positive boost,” Vella said. “We’re slowly breaking down that barrier of it being a ‘men’s club’ which was around years ago and starting to create a more family friendly atmosphere. “More ladies are starting to compete and a lot are coming down now with their family to watch.” Frankston Australian Clay Target Club has seen success recently with their female clay shooters as Laetisha Scanlan flew the Australian flag at the Gold Coast Commonwealth Games earlier this year. Scanlan returned home with her second gold medal in the Women’s trap and defended her gold medal honours from the 2014 Glasgow Commonwealth Games. Vella said the success of Laetisha and other female shooters from the sport has “definitely helped with creating exposure” and that it’s “really starting to create a brand.” The club is hoping through their recent success and with the help of the ‘come and try’ sessions that they can reach a 40 per cent female participation in membership, committee members, coaches and in competition to fall in line with the 2019 National sport participation goal.

MENTONE hockey player Gracie Geddis has unexpectedly received news via text message from a friend that she will take on some of the world’s best junior hockey players in Cape Town, South Africa next month. Graice, 16, is one of two Victorian girls selected to join the under-17s Australian side and is set to fly out on Friday 29 June. Gracie’s mother, Wendy, said it was amazing to hear that her daughter had made the Australian side after receiving the news in such an odd fashion. “It was incredible,” Wendy said. “It was all a bit of a surprise when she heard she had made it after her friend stumbled across it online.” “It was one of her goals that she wanted to achieve, and I think she’s pretty keen to get over there now.” After a stellar performance at the Pacific School Games in December last year, the Mentone Girls’ Secondary College student was chosen by School Sports Australia to represent the country on the two-week international tour, and Wendy believes this will be another step up in Gracie’s hockey but is a step that she is pretty keen to take. “Playing with the best players in Australia gives her another level experience,” Wendy said. “I think she’ll love it.

“She’s extremely excited and a little nervous now that she knows how far away it is.” Gracie, who has been competing at state level since she was 11-years-old, also competed recently at the 2018 National Championships, held in Launceston, as part of the Victorian under-18 Women’s team and was announced as a “Futureoo” by Hockey Australia – a title which recognises up-and-coming hockey talent in Australia. Aside from representing her state and country, Gracie also plays in the Mentone women’s premiership team which finished runners-up in last season’s competition – a position which she hopes to go one better this season. To assist her on her trip to South Africa, Isaacs MP Mark Dreyfus presented a $500 Local Sporting Champions grant to Gracie two weeks ago. “We have some wonderful sporting clubs in the City of Kingston and Gracie, her family and the Mentone Hockey Club should be very proud,” Dreyfus said. Gracie is also raising funds on her own behalf to help cover the costs of her 2018/19 hockey journey. If you want to help Gracie, donations can be made at: https://asf.org.au/donate/Graciegeddis/. Ben Triandafillou South Africa bound: Gracie Geddis congratulated by Isaacs MP Mark Dreyfus. Picture: Gary Sissons

SOUTHERN Peninsula Sharks state championship women’s side continue to show that they deserve their spot in the highest division as they slotted their fifth victory for their season on the road against McKinnon Cougars in round seven of the Big V. The Sharks’ young squad shot at a 47 per cent clip to defeat the Cougars (58-82) away from home, with Jaz Shelley (26 pts) and Peyton Little (23 pts) again delivering solid performances. While the Cougars took a six point lead out of the first break, the Sharks quickly turned the game around in the second quarter to finish the half up by nine points. The Sharks continued to pull away throughout the second half and finished the match with a 24-point victory, cementing their fourth spot on the ladder. The Sharks’ division two men’s side weren’t as fortunate when they played away against Mildura Heat at the “Hothouse”, with one of their main men Colin Voss out for the next couple of weeks. The Sharks were competitive at the start of the game but eventually the

Heat wore them down in the second and third quarters to walk away with a 21-point victory (89-68). Men’s Sharks head coach Lucas Allen said the travel can always be a complication but without a couple of main players, it made it even harder. “We were pretty competitive for 30 to 40 minutes of the game but with Colin Voss and Dave Smith unavailable it made it tough for us,” he said. “Smith returns this week which will add some extra depth to the side and playing at home will make a big difference with the energy and momentum that the crowd provides.” Allen was also full of praise for their younger players that continue to take the step up in their senior men’s and women’s sides. “We don’t play them just for the sake of playing them,” he said. “We’re managing to give them these opportunities but they’re proven and more than capable to compete at this higher level. “We’re trying to build something sustainable with a portion of the side being younger players, a portion of the side being older and wiser and then some that are in their prime so that we can continue to be competitive.”

In division one of the men’s league, Chelsea Gulls had a comprehensive victory over Collingwood on Saturday 5 May after a commanding 56-29 second half push. While the All Stars hit the board early, the Gulls hit back in the second half with Brasser (22 pts), Standerfer (18 pts, 11 rbs, 11 ast), Frost (17pts) and Tyrrell (14 pts) contributing significantly to a 25-point victory (64-89). The Gulls tried to back it up on the Sunday against Shepparton but after a tough battle and a 10-point final quarter from Matt Bartlett (16 pts), it was the Gators (69-75) who came out on top. Brasser (23 pts) and Standerfer (20 pts) again put in solid performances. The third-placed Gulls women’s side were the victors in a low scoring contest against Western Port (46-55) as the Steelers remain winless after the seventh round. The Steelers got going late, but after scoring single figures in the first two quarters, it wasn’t enough to make up the ground. Second win: Corey Standferer helped Chelsea Gulls secure a 25-point victory with a strong second half. Picture: Supplied. Southern Peninsula News