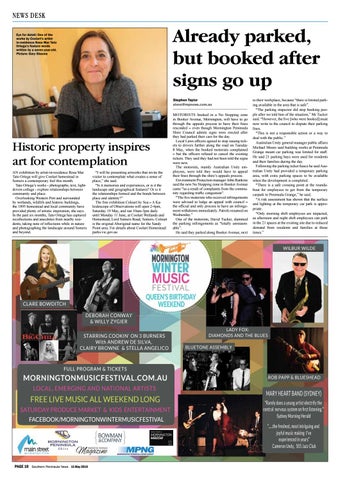 Already parked, but booked after signs go up

Eye for detail: One of the works by Coolart’s artistin-residence Rosa Mar Tato Ortega’s feature words written by a seven-year-old. Picture: Gary Sissons

Historic property inspires art for contemplation AN exhibition by artist-in-residence Rosa Mar Tato Ortega will give Coolart homestead in Somers a contemporary feel this month. Tato Ortega’s works - photographs, text, lightdriven collage - explore relationships between community and place. Overlooking Western Port and surrounded by wetlands, wildlife and historic buildings, the 1895 homestead and local community have provided plenty of artistic inspiration, she says. In the past six months, Tato Ortega has captured recollections and anecdotes from nearby residents, taking note of reflections while in nature and photographing the landscape around Somers and beyond.

“I will be presenting artworks that invite the visitor to contemplate what creates a sense of place,” she said. “Is it memories and experiences, or is it the landscape and geographical features? Or is it the relationships formed and the bonds between place and identity?” The free exhibition Colourt by Sea – A Kaleidoscope of Observations will open 2-4pm, Saturday 19 May, and run 10am-3pm daily until Monday 11 June, at Coolart Wetlands and Homestead, Lord Somers Road, Somers. Colourt is the original Aboriginal name for the Sandy Point area. For details about Coolart Homestead: parks.vic.gov.au

MOTORISTS booked in a No Stopping zone in Booker Avenue, Mornington, will have to go through the appeals process to have their fines rescinded – even though Mornington Peninsula Shire Council admits signs were erected after they had parked their cars for the day. Local Laws officers agreed to stop issuing tickets to drivers further along the road on Tuesday 8 May, when the booked motorists complained – but the officers refused to cancel the existing tickets. They said they had not been told the signs were new. The motorists, mainly Australian Unity employees, were told they would have to appeal their fines through the shire’s appeals process. Environment Protection manager John Rankine said the new No Stopping zone in Booker Avenue came “as a result of complaints from the community regarding traffic congestion”. “The five motorists who received infringements were advised to lodge an appeal with council – the official and only process to have an infringement withdrawn immediately. Patrols resumed on Wednesday.” One of the motorists, David Tucker, slammed the parking infringements as “totally unreasonable”. He said they parked along Booker Avenue, next

to their workplace, because “there is limited parking available in the area that is safe”. “The parking inspector did stop booking people after we told him of the situation,” Mr Tucker said. “However, the five [who were booked] must now write to the council to dispute their parking fines. “This is not a responsible action or a way to deal with the public.” Australian Unity general manager public affairs Michael Moore said building works at Peninsula Grange meant car parking was limited for staff. He said 21 parking bays were used for residents and their families during the day. Following the parking ticket fiasco he said Australian Unity had provided a temporary parking area, with extra parking spaces to be available when the development is completed. “There is a safe crossing point at the roundabout for employees to get from the temporary carpark to Peninsula Grange,” he said. “A risk assessment has shown that the surface and lighting at the temporary car park is appropriate. “Only morning shift employees are impacted, as afternoon and night shift employees can park in the 21 spaces at the existing site due to reduced demand from residents and families at those times.”