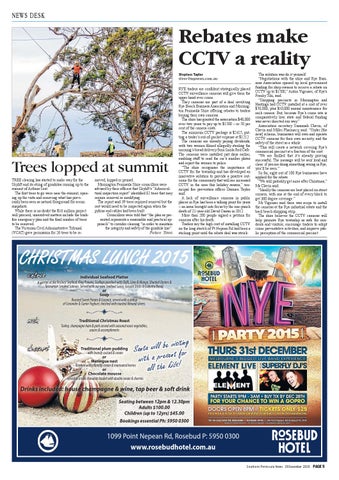 Trees lopped at summit TREE clearing has started to make way for the Skylift and its string of gondolas running up to the summit of Arthurs Seat. The first trees to go were near the summit, opening up the vista and removing what has previously been seen as natural foreground for scenic snapshots. While there is no doubt the $16 million project will proceed, unresolved matters include the bushfire emergency plan and the final number of trees to be removed. The Victorian Civil Administrative Tribunal (VCAT) gave permission for 26 trees to be re-

moved, lopped or pruned. Mornington Peninsula Shire councillors were advised by their officers that Skylift’s “Arboricultural inspection report” identified 82 trees that may require removal or modifying. The report said 39 trees required removal but the rest would need to be inspected again when the pylons and cables had been built. Councillors were told that “the plan as presented represents a reasonable and practical approach” to corridor clearing “in order to maintain the integrity and safety of the gondola line”. Picture: Yanni

RYE traders are confident strategically placed CCTV surveillance cameras will give them the upper hand over crime. They cameras are part of a deal involving Rye Beach Business Association and Mornington Peninsula Shire offering rebates to traders buying their own cameras. The shire has granted the association $48,000 over two years to pay up to $1500 – or 50 per cent of the camera costs. The minimum CCTV package is $2425, putting a trader’s out-of-pocket expense at $1212. The cameras are already paying dividends, with two women filmed allegedly stealing the morning’s bread delivery from Imola Red Cafe. The cameras were installed just days earlier, enabling staff to read the car’s number plates and report the women to police. “The shire recognises the importance of CCTV for the township and has developed an innovative solution to provide a positive outcome for the community that will see increased CCTV in the area this holiday season,” municipal fire prevention officer Damien Taylor said. A lack of surveillance cameras in public places in Rye has been a talking point for years – an issue brought into focus by the one-punch death of 22-year-old David Cassai in 2012. More than 200 people signed a petition for cameras after his death. Traders say the high cost of installing CCTV on the long stretch of Pt Nepean Rd had been a sticking point until the rebate deal was struck.

The solution was do it yourself. “Negotiations with the shire and Rye Business Association opened up local government funding for shop owners to receive a rebate on CCTV up to $1500,” Anton Vigenser, of Rye's Freaky Tiki, said. “Shopping precincts in Mornington and Hastings had CCTV installed at a cost of over $70,000, plus $10,000 annual maintenance for each camera. But, because Rye’s crime rate is comparatively low, state and federal funding was never directed our way.” Association secretary Susannah Clavin, of Clavin and Miller Pharmacy, said: “Under [the new] scheme, businesses will own and operate CCTV cameras for their own security, and the safety of the street as a whole. “This will create a network covering Rye’s commercial precinct at a fraction of the cost. “We are thrilled that it’s already proving successful. The message will be sent loud and clear: if you are doing something wrong in Rye, you’ll be seen.” So far, eight out of 100 Rye businesses have applied for the rebate. “We will probably get more after Christmas,” Ms Clavin said. “Ideally the cameras are best placed on street corners, with one at the end of every block to get 360 degree coverage.” Mr Vigenser said there was scope to install the cameras at the Rye industrial estate and the back beach shopping strip. The shire believes the CCTV cameras will help promote Rye township as safe for residents and visitors; encourage traders to adopt crime preventative activities, and improve public perception of the commercial precinct.