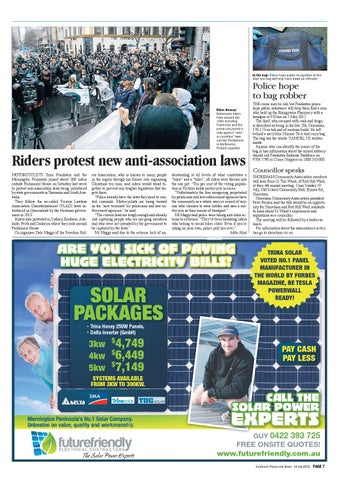 In the bag: Police hope public recognition of this blue tool bag will help track down an offender.

Police hope to bag robber Biker dismay: Motorcycle riders from around the state including Frankston and the peninsula joined a rally against â&amp;#x20AC;&amp;#x153;antiassociationâ&amp;#x20AC;? laws outside Parliament in Melbourne. Picture supplied

Riders protest new anti-association laws MOTORCYCLISTS from Frankston and the Mornington Peninsula joined about 300 riders outside Parliament House on Saturday last week to protest anti-association laws being introduced by state governments in Tasmania and South Australia. They follow the so-called Vicious Lawless Association Disestablishment (VLAD) laws introduced in Queensland by the Newman government in 2013. Riders also protested in Sydney, Brisbane, Adelaide, Perth and Canberra where they rode around Parliament House. Co-organiser Dale Maggs of the Freedom Rid-

THE crime may be old, but Frankston police hope public assistance will help them find a man who held up the Blairgowrie Pharmacy with a handgun at 9.05am on 5 May 2012. The thief, who escaped with cash and drugs, is described as being in his late 20s, Caucasian, 170-175cm tall and of medium build. He left behind a navy blue Chrome Tech tool carry bag. The bag has the words â&amp;#x20AC;&amp;#x2DC;SAMUEL J II written inside. Anyone who can identify the owner of the bag or has information about the armed robbery should call Frankston Embona Taskforce on 9784 5590 or Crime Stoppers on 1800 333 000.

Councillor speaks SHOREHAM Community Association members will hear from Cr Tim Wood, of Red Hill Ward, at their 4th annual meeting, 11am Sunday 19 July, Old School Community Hall, Byrnes Rd, Shoreham. Shoreham Community Association president Peter Renkin said the talk would be an opportunity for Shoreham and Red Hill Ward residents to learn about Cr Woodâ&amp;#x20AC;&amp;#x2122;s experiences and aspirations as a councillor. The meeting will be followed by a barbecue lunch. For information about the associationâ&amp;#x20AC;&amp;#x2122;s activities go to shoreham.vic.au